Share All sharing options for: Andrew Luck for Heisman 2011

Because it's never too early to start campaigning (and hoping) for another shot at the Heisman Trophy, and another year of Andrew Luck on the Farm... 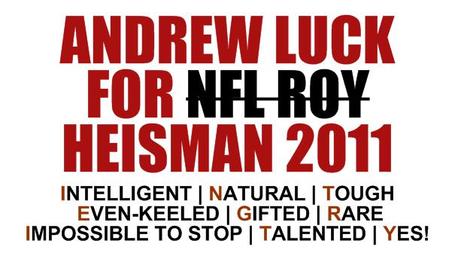 The New York Times' Pete Thamel writes that Luck's all-expenses-paid trip to New York won't be his last. The question is whether the Stanford redshirt sophomore's next trip to the Big Apple will be for the 2011 NFL draft or as part of a Pac-12 media blitz before the 2011 college football season.

Many have tied Luck's future plans to Jim Harbaugh, and the looming NFL lockout could complicate both of their decisions. When asked whether Jake Locker's decision to return to Washington after being projected as the No. 1 pick in the draft would factor into his plans, Luck didn't hesitate.

I don’t want to sound cocky or pretentious or whatever, but no. I think it’s just you have to have trust in the decision you’re going to make is the right one. If it’s going to back to school, I’m confident that I can still perform at a high level.

Don't worry, Andrew. You don't sound pretentious, and we trust that whatever decision you make will be the right one. Selfishly, we just hope that it's to come back to school.