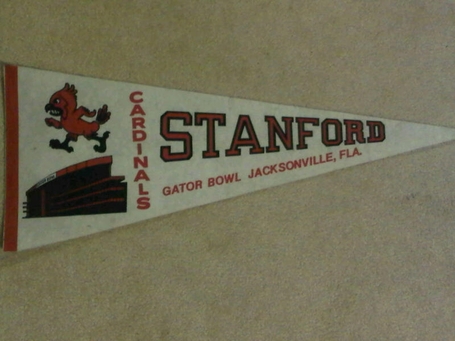 Stanford's trip to the Orange Bowl next month will mark the school's 22nd bowl game and third in the state of Florida. This week I'll take a look back at the Cardinal's previous two postseason appearances in the Sunshine State, beginning with its 27-21 loss to Clemson in the 1986 Gator Bowl.

Jack Elway-coached Stanford arrived in Jacksonville with an 8-3 record and a quarterback, Greg Ennis, who was preparing to make his first career start in place of the injured John Paye. Clemson arrived with a 7-2-2 record, an intimidating defense led by Michael Dean Perry, and a pair of senior tailbacks, Terrence Flagler and Kenny Flowers, who were determined to end their collegiate careers in their home state on a high note.

For a half, it looked like Flagler and Flowers would lead the ACC champion Tigers to the biggest blowout in Gator Bowl history. Clemson's option-heavy offense was unstoppable at the start, and Stanford trailed 24-0 before it registered a first down. The Tigers outgained the Cardinal 291-57 in the first half.

"It was a quiet halftime locker room,'" said Stanford running back Brad Muster, the Pac-10 Offensive Player of the Year. "Once things got started, we finally realized where we were at and played a little with pride.''

The Stanford defense made some adjustments and held Clemson scoreless in the second half, allowing the Cardinal to climb back into the game. Muster, who shared outstanding player honors with Clemson quarterback Rodney Williams, rushed for one touchdown and caught a pair of touchdown passes from Ennis, who came on in relief of Paye during the final game of the regular season. Ennis finished 20-for-40 for 168 yards, two touchdowns, and one interception.

Paye wasn't the only starter missing for Stanford. Linemen Tony Leiker and John Zentner were suspended for the game after failing the NCAA's new ultrasensitive drug tests, while cornerback Alan Grant was sidelined with a knee injury. Still, Stanford had a chance to win the game in the fourth quarter. The Cardinal started its final drive from deep in its own territory with 1:24 to play, but turned the ball over on downs.

As Mark Zeigler wrote in the San Diego Union-Tribune:

Stanford University's football team should have known that it would come close but wind up short against Clemson in yesterday's Gator Bowl. The omen arrived from the overcast, misty sky seconds before kickoff. Six Army parachutists carrying various flags descended from the gloom above and tried to land on the floor of the Gator Bowl, packed with 80,104 fans. One parachutist missed and was forced to land on an adjacent street -- the guy carrying the Stanford flag.

"I can relate to a movie we saw last night, `Heartbreak Ridge,' Clemson head coach Danny Ford said. "They shot a guy and he was still alive, so they shot him again. We didn't kill them. We only left them wounded."