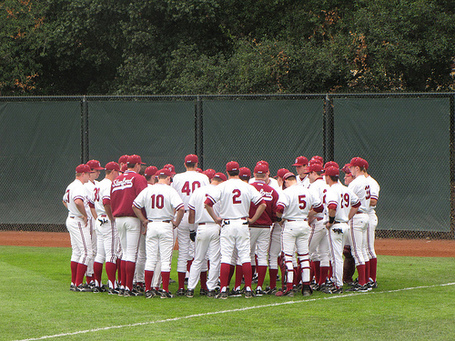 Stanford outscored Washington State 34-16 in the opening weekend of Pac-10 play. (via crazedparent)

I know everyone's still a little shellshocked from last night's game, but alas, there were other Stanford athletes in action this weekend.

Stanford volleyball standout Spencer MacLachlin and four other seniors ended their home season with a weekend split against No. 1 USC and Pepperdine. | GoStanford

Softball was trounced at home by Arizona, swept in all three games, including an ugly Friday night five-inning 8-0 loss.  Things don't get easier as they face defending national champion UCLA down in Westwood next weekend. | Arizona Daily Star

Women's gymnastics, despite being ranked in the top-3 all season and going into the final rotation in second place, failed to advance out of NCAA regionals to the championship meet for the first time in five years.  No Stanford gymnast was selected for the All-Around competition, either. | GoStanford

On the opposite end of the spectrum, the men upset top ranked Oklahoma in the MPSF gymnastics championship with a 1-2-3 finish on the rings by Tim Gentry, James Fosco, and Jordan Nolff and strong performances by Alex Buscaglia and Cameron Foreman on the high bar.  Stanford has never won an NCAA championship without also winning the MPSF title. | Stanford Daily

Both men's and women's tennis continued their winning ways, with the No. 12 men beating both Tulsa and Arizona while the top-ranked women took down Arizona state before having their match against Arizona cancelled Saturday. | Stanford Daily

Finally, what a weekend for baseball.  Friday night, Stanford led Wazzu 8-2 at the top of the eighth, only to end up losing the game 10-8 behind a disastrous eight-run eighth inning that featured three different Stanford pitchers.  A snow-delayed Saturday game didn't stop Stanford, though, as it went on to win by a score of 22-3.  Sunday's 4-3 win by the Cardinal gave Coach Mark Marquess his 1,400th win at Stanford. | Stanford Daily
Freshman infielder Lonnie Kauppila was honored by both the Pac-10 and Collegiate Baseball newspaper as the conference and national player of the week, respectively. | GoStanford