Film Study: How Stanford and Colorado will match up against one another in Boulder

Share All sharing options for: Film Study: How Stanford and Colorado will match up against one another in Boulder

This year, Colorado has been... bad.

That's about the only way to describe it.

The Buffaloes carry a 1-7 record into their matchup with Stanford - their only win is a shocking upset over Washington State - and this week won't get any easier. This is Colorado's third consecutive game against a top 20 team - USC, Oregon and now Stanford - and based on the way things have gone so far this year, it should be another bloodbath in Boulder on Saturday.

I broke down Colorado's matchup against USC two weeks ago to see just how the Buffaloes will try and counter the Cardinal's attack this Saturday, and how Stanford should be able to exploit Jon Embree's squad.

Colorado's offense is occasionally effective - their run game occasionally pilots the zone-read option to perfection and they have a few well-designed play-action pass plays - but they can't ever reel off long drives that end in touchdowns.

The first reason for this is their offensive communication. Colorado's line is good enough - about half of the time, they make the right calls and are able to get a good push off the line of scrimmage - but they really, really struggle to pick up blitzes because they do not communicate well.

Far too often, a blitzer gets a clean shot at the quarterback while the linemen dutifully double-team other rushers, leading to disastrous sacks and turnovers that kill the offense's chances of success.

Here's an example. Early in the first quarter, Colorado sets up a first and ten in USC territory and tries to run a pass in the flat to the running back. However, the play never has a chance to work because a blitzer is able to get to the quarterback first. 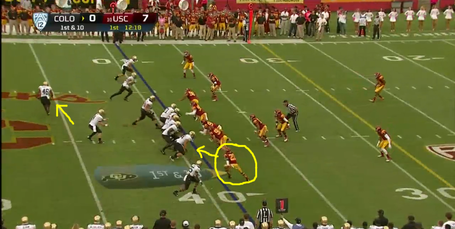 At the snap, USC's blitzer, cornerback Nickell Robey charges off the left side from his cornerback spot. Neither the quarterback, Jordan Webb, nor the wide receiver calls out that a blitzer is coming from that side, and nobody seems to notice that Robey is about to crash headfirst into the Webb and blow the play up. 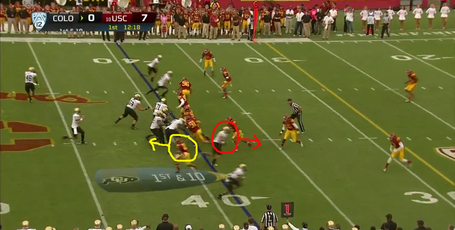 The only guy who has a chance to block Robey, the Colorado tight end, releases downfield, utterly oblivious to Robey's presence. Of course, Robey gets a hit on the quarterback and the pass falls incomplete. 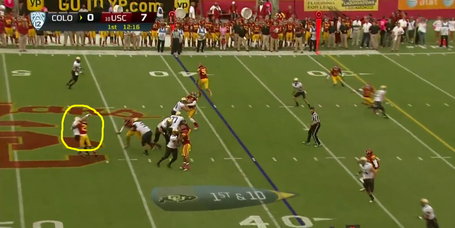 This happened over and over again in this game. Pretty much any time USC brought more than five guys, Colorado experienced a total communication breakdown.

Here's another example. Let's look at the pre-snap setup: 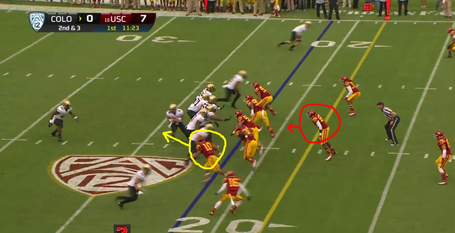 At the snap, USC outside linebacker Hayes Pullard will blitz off the right side. The middle linebacker, Lamar Dawson, will blitz a few seconds later, but this play is already ruined the second the ball is snapped. Pullard gets off the line of scrimmage completely free as the offensive line slides to the left. 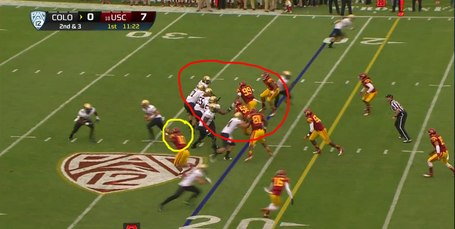 Again, the Colorado blockers are oblivious to the fact that two rushers are coming off the right side. Look at this next picture - six Buffalo blockers are trying to block four rushers while two USC linebackers rush toward the quarterback completely unblocked. Not a single offensive lineman is even looking in the right direction. 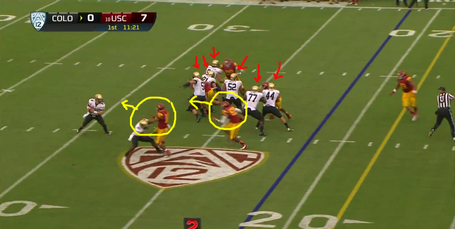 Colorado leaves only the running back with the task of blocking both linebackers, and, of course, it doesn't work.

The rushers get to Webb, who desperately flings the ball downfield, where the pass is intercepted.

Again, all of this leads to turnovers that kill the Buffaloes' chances of success. Time and again, they would run a few good plays, then make a disastrous miscommunication that lead to a punt or a turnover.

For example: 21 of USC's first 40 points were points off Colorado turnovers, including a series where USC scored off a turnover, Colorado fumbled on its very next offensive snap, and then USC scored again. It's devastating to watch the Buffaloes do this over and over again.

By midway through the third quarter, the score was 40-6 and USC's backup quarterback was in the game.

Quite frankly, this is a sign of poor coaching on Colorado's part - the coaches haven't taught the players how to communicate well enough (i.e. audible to one another before the snap) to pick up these obvious blitzes or change into plays that won't be ruined by the blitz.

Also, they tried a halfback pass twice in one half and it didn't work either time. If that's not a sign of poor coaching, I don't know what is.

Therefore, Stanford's defense just needs to keep doing what it's been doing well so far this year - stop the run and don't allow wide receivers to roam free - and the turnovers will come to them. The discipline and balance of Stanford's defense, as well as the ferocity of its pass rush, means that the Cardinal should rack up some impressive defensive stats this Saturday.

In addition to Colorado's offense consistently failing to sustain drives, the Buffaloes' defense was torched by USC's receivers in this game as well.

Unfortunately, because the USC receivers were getting free releases off the line of scrimmage, Lee and Woods were always running past the Colorado defenders, making them miss tackles, and dashing into the end zone.

With that said, this a good week for Stanford to try and open up its passing playbook and see if it can find a little more success through the air and build up Josh Nunes' and Kevin Hogan's confidence in their receivers.

Of course, the most notable thing about the Stanford offense vs. Colorado defense matchup this week is Kevin Hogan's expanded role. According to David Shaw, the sophomore will play about 12-20 snaps on Saturday in the hopes that Hogan's presence will kickstart the sputtering Stanford offense. So what exactly should we expect to see from Hogan against Colorado?

So far this year, Hogan has mostly been running the ball on zone-read option plays, like on this play, the first snap of the game against Cal. Hogan is a very capable runner - he's the most athletic of any of Stanford's quarterbacks - and he knows how to run the zone-read very well.

On this play, Hogan stands with Remound Wright to his left. Hogan will decide to keep the ball for himself or hand the ball to Wright based on what Cal defensive end Nathan Broussard (circled in yellow) does once the ball is snapped. 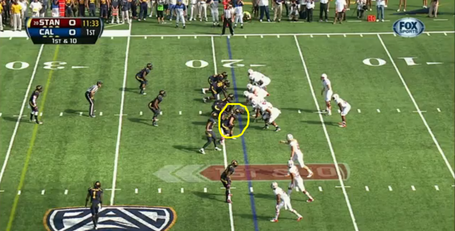 At the snap, the defensive end stops at the line of scrimmage, meaning that he is responsible for the quarterback and won't be chasing after the running back. Therefore, Hogan hands the ball off to Wright. 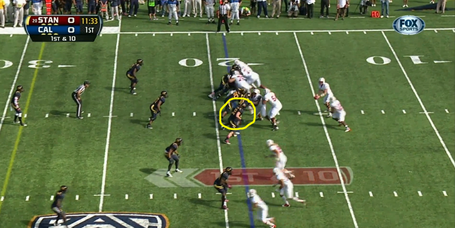 Wright gets a good lead block from David Yankey, who pulls from his left tackle spot and absolutely flattens his man (circled in yellow), and even though two other Cardinal linemen miss their blocks (circled in red), Wright has a huge hole to run through. 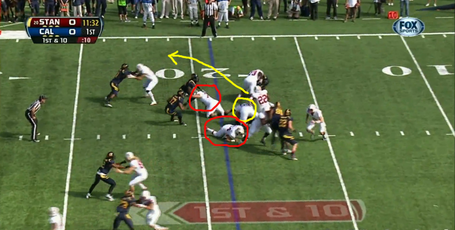 Although the play was called back because of a hold, expect Stanford to run this play over and over again. Any time Hogan stands in the backfield with a running back beside him, the Stanford coaches will likely have called a variation of this exact play.

Of course, Hogan can also line up under center as well, as he did when he threw his touchdown pass to Levine Toilolo against Cal.

On this play, the Cardinal runs a play-action bootleg pass where Hogan fakes the handoff to Stepfan Taylor, rolls to his right and looks for Toilolo in the end zone. 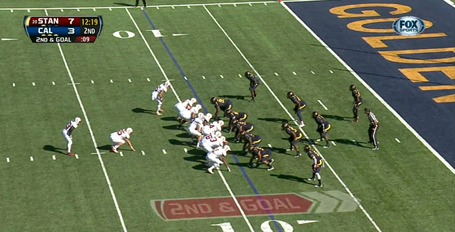 At the snap, Taylor runs to his left and guard Kevin Danser pulls to his left, which makes all of the Cal linebackers think that the play will be a run. As you can see below, all of the Bears are watching Taylor in the backfield. 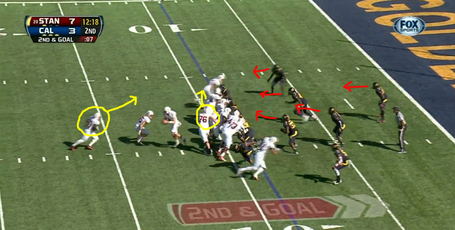 Because of this play-action, Hogan knows that all of the linebackers cannot recover in time to get back into pass coverage, so he can look downfield and expect Toilolo to be matched up one-on-one against a safety - and that's exactly what Hogan sees. 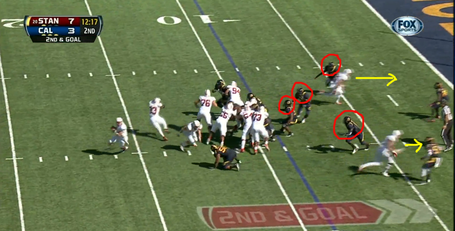 Both of the tight ends release past the linebackers without a worry, and from here, it's an easy pass for an easy six points.

Altogether, this is a pretty simple play - it's easy for the quarterback to see if his receivers are open or if he should throw the ball away - and Hogan executes it to perfection.

This play action and the zone-read option have one thing in common - they minimize the reads that the quarterback has to make at the line of scrimmage before the snap and during the play - thus minimizing the mistakes the quarterback can make. Expect Hogan to see lots of plays that emphasize simple reads on Saturday - and expect him to play well. If he can can handle that task, expect the Cardinal coaching staff to continue to give him increased snaps for the rest of the year and give him more complex plays to run.