Share All sharing options for: The Top 10 Games of Nneka Ogwumike's Stanford Career

With Sunday's trip to Cal marking the final regular season game of Nneka Ogwumike's Stanford career, it's a good time to look back at some of the defining performances from her time on the Farm. Trust me, it was hard to pick just 10. Let's hope it'll be even harder come April. Please share your own favorite Nneka memories -- and any games you think I missed -- in the comments.

With Jillian Harmon, Jayne Appel, and Kayla Pederson all in foul trouble, Ogwumike had 14 points and 10 rebounds off the bench in a 70-61 win at Arizona. The reigning GatoradeNational High School Player of the Year played 27 minutes, shot 6-for-12 from the field, and added 2 blocks.

"I think it's really exciting seeing Nneka have a breakout game like this," head coach Tara VanDerveer said after Ogwumike had 27 points and 13 rebounds in an NCAA Tournament second round win over San Diego State. "It was good in a way. She played so poised and she was so effective especially because Jayne was not that effective. Nneka really stood out and had a fabulous game." Appel had 12 points and 11 rebounds in only 16 minutes. Ogwumike shot 8-for-10 from the field and made 11-for-13 from the free throw line. "We really had no answer for Nneka," said San Diego State head coach and former Stanford strength and conditioning coach Beth Burns. "...It's remarkable to think she's just a freshman." Nneka, who had 13 points and 12 rebounds in Stanford's loss to UConn in the Final Four, was only getting started.

Kayla Pedersen outdid her by a point, but Ogwumike scored 29 and grabbed 13 rebounds in a 105-74 win over Gonzaga. "We have to play inspired or it will be hard for us to get where we want to go," Ogwumike said. "Coach tells us we have to play like no one can stop us. With that collective attitude it's helpful. It's mental rather than physical for getting us on top of it."

Ogwumike scored 30 points and set the Stanford record for rebounds in a game with 23 in a 100-80 win at Oregon. Nneka's 23 rebounds, including 8 offensive boards, broke the previous mark of 21 set by Nicole Powell.

Ogwumike wasn't going to let Stanford bow out of the Final Four one game short of the championship game for a second straight year. The sophomore scored the Cardinal's first 8 points and the final 7 in a 73-66 victory over Oklahoma to set up a rematch with UConn in the title game. "We talked about playing with fire and I think we lit that fire tonight," said Ogwumike, who finished with 38 points and 16 rebounds. 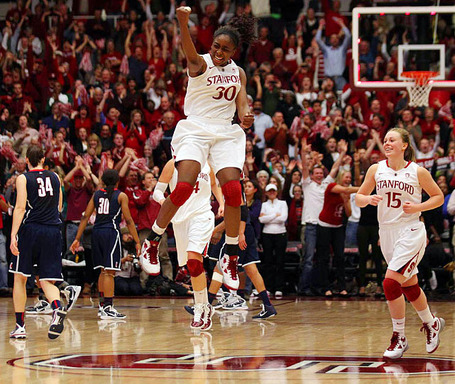 She and only had 12 points and 6 rebounds, but one has to include Stanford's 71-59 win over Connecticut at Maples Pavilion, which snapped the Huskies' 90-game winning streak, among the defining performances of any Cardinal player who was a part of it.

Her junior year didn't produce many eye-popping single-game performances, but the Pac-10 Player of the Year put on a show in the Pac-10 Tournament semifinals. Ogwumike had 32 points and 10 rebounds onf 15-of-22 shooting in a 100-71 win against Arizona.

Perhaps no team will be happier to see Ogwumike graduate than Gonzaga, which watched the Stanford senior score 33 points and grab 18 rebounds in a 76-61 season-opening win. This is the only one of Ogwumike's games I've seen in person, having flown out for the disappointing Stanford-Oregon football game the day before. It was a good one.

No one will soon forget the career night (42 points, 17 rebounds) that Ogwumike had in Stanford's 97-80 win over Tennessee. It was emotional night, with Pat Summitt making her first appearance at Maples Pavilion since announcing that she had early-onset dementia. VanDerveer called Ogwumike's performance one of the most incredible individual performances she's ever seen at Maples. "She was a woman with girls out there," VanDerveer said.