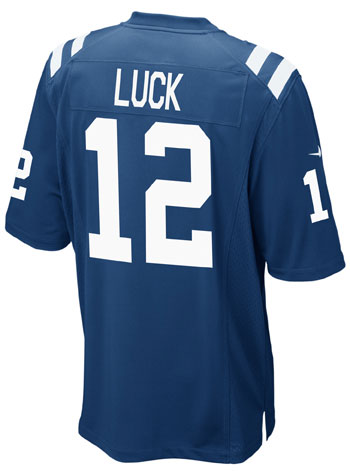 Andrew Luck's No. 12 was the fourth-hottest jersey from April 1-May 28, according to NFLShop.com. Fellow quarterbacks Peyton Manning, Tim Tebow and Robert Griffin III ranked 1-3 over the same period. Luck is the only one of the four to have a coaching position endowed in his honor.

Bring Andrew Luck home with this awesome, officially licensed Indianapolis Colts Andrew Luck Pennant. Measures 12" x 30". This makes any wall stand out, and your friends will know you're a true Colts fan with this great Andrew Luck pennant!

Yes, your friends will know you're a true Colts fan--and maybe a little crazy--if you hang this in your home. The only thing that could make this better would be if the image of Luck were an old-school illustration instead of a photo. The NFL Shop hasn't released a list of the top-selling player pennants to my knowledge, but Luck's has to be at or near the top. I imagine Oliver Luck has one hanging in his office.