Seattle's Blackout of the (20th) Century

With the Blackout of the 21st Century scheduled for tonight at CenturyLink Field, we take a look back at Seattle's most famous blackout.

Share All sharing options for: Seattle's Blackout of the (20th) Century

If you haven't heard, Washington has billed tonight's game against Stanford at CenturyLink Field as the Blackout of the Century. The Huskies will wear black, UW fans are encouraged to wear black and various sponsors will hand out black schwag, including beanies, gloves and sunglasses. The Cardinal apparently didn't get the memo.

Washington has done the blackout thing before, but this year's version is somehow blacker. In 2010, the Huskies blew out UCLA, 24-7, in a nationally televised blackout on a Thursday night. They wore their black uniforms later that year in an upset of Nebraska in the Holiday Bowl. Conclusion: black uniforms make you play better, which is why the Oakland Raiders....

Last season, the Huskies blacked out Arizona, 42-31, but were lit up by Oregon, 34-17, in a nationally televised blackout one week later.

Anyway, all of the hype about tonight's Blackout of the Century got me thinking: what was the Blackout of the 20th Century? A late-season Seahawks-Chiefs tilt at the Kingdome with wild card implications? No, it was something far more interesting -- and has nothing to do with tonight's game.

On the night of March 7, 1941, Seattle became the first major American city to stage a wartime blackout test. 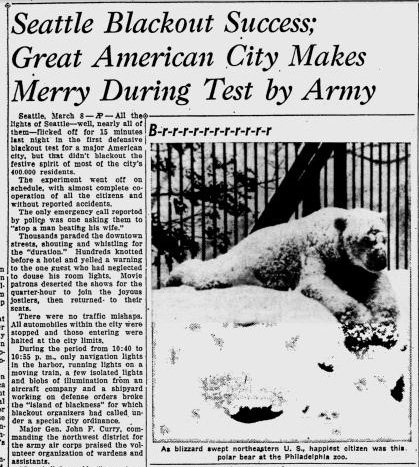 All the lights of Seattle – well, nearly all of them – flicked off for 15 minutes last night in the first defensive blackout test for a major American city, but that didn’t blackout the festive spirit of most of the city’s 400,000 residents.

The experiment went off on schedule, with almost complete cooperations of all the citizens and without reported accidents.

The only emergency call reported by police was one asking them to "stop a man beating his wife."

Thousands paraded the downtown streets, shouting and whistling for the "duration." Hundreds knotted before a hotel and yelled a warning to the one guest who had neglected to douse his room lights. Movie patrons deserted the shows for the quarter-hour to join the joyous jostlers, then returned to their seats.

There were no traffic mishaps. All automobiles within the city were stopped and those entering were halted at the city limits.

During the period from 10:40 to 10:55 p.m., only navigation lights in the harbor, running lights on a moving train, a few isolated lights and blobs of illumination from an aircraft company and a shipyard working on defense orders broke the "island of blackness" for which blackout organizers had called under a special city ordinance.

"Seattle," he said, "has set an example for the whole country of which it can justly be proud…Even after learning how thoroughly the whole experiment had been planned, I didn’t dream that the blackout would be as nearly total as it was. That can be due to only one thing – the fine, patriotic spirit of the vast majority of the people who co-operated so thoroughly."

A newspaperman who flew over the city along with army airplanes during the test said that he could see no lights other than those of the shipyard, airplane factory, harbor and airways. (Legal and national defense considerations made the extinguishing of these impracticable).

Forgotten lights provided most of the theoretical trouble for wardens who were organized on a precinct basis and included war veterans and boy scouts. A few stores neglected to make arrangements for dousing window lights, but one all night drugstore closed for the first time in 50 years. The store manager had to secure a special padlock for the lockless door.

By error, even the police radio station was "blacked out" when a master circuit in the building’s electric circuit was thrown.

The story fails to mention whether the boy scouts were handing out sunglasses.