The sharp eyes at The Stanford Daily spotted a picture tweeted by former Cardinal quarterback Todd Husak that might provide some insight into what the 2013 football schedule will look like. 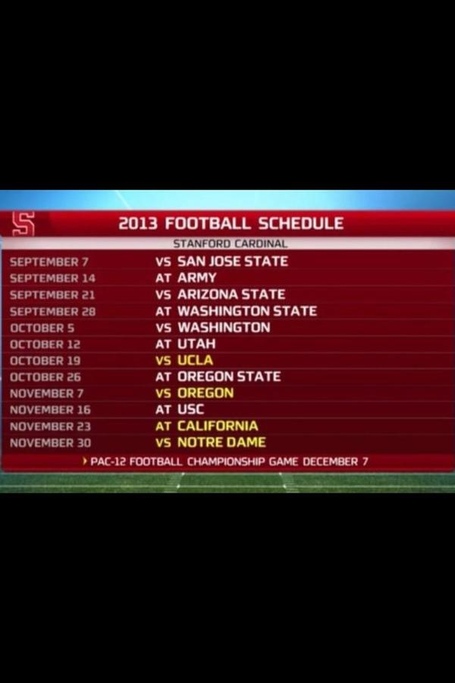 While there are a few wonderful things to note about the schedule - including the fact that Big Game will return to its rightful place in November - there are a few errors worth noting. First is that the Big Game is apparently at Cal (it won't be) and the Pac-12 Championship game is scheduled for a Saturday (the game has been on a Friday night the last two years).

In case you're wondering, the real schedule should be released today at 11 am PT.

Stanford men's basketball finally got into the win column in Pac-12 play last night by beating Washington State, 78-61. Aaron Bright filled it up with a season-high 21 points - a nice boost for a guy who's had a quiet/off year so far. Watch a postgame interview with Dwight Powell at the Pac-12 website.

Rant Sports takes an early look through the depth chart to try and determine who will be the Cardinal's tight ends in 2013.

Former Cardinal and current Seattle Seahawk Richard Sherman got punched in the face after the Seahawks' playoff win over the Redskins - and he was mic'd up when it happened. Sherman does appear to provoke Trent Williams a bit, but he probably wasn't deserving of a solid shot to the jaw.