The Cardinal controls its path to the Rose Bowl... but it has to defeat an ornery, talented Sun Devils team on the road first

The Stanford Cardinal controls its own destiny to make it to a fourth straight BCS bowl and a second straight Rose Bowl. David Shaw's team is right where it wants to be - and right where it expected to be at the beginning of this season.

But that doesn't mean it will be easy.

Arizona State is playing inspired football - a 7-game win streak to conclude the season proves that - and they've been absolutely dominant at home this year. They score in bunches and torch opponents in the red zone and throw the ball with impunity. They turned Arizona into a smoldering corpse in less than a half just last week.

On top of that, Todd Graham (and his televangelist headset) has breathed new life into the program. There's a palpable energy around Arizona State football that's hard to quantify at this moment, and they're going into their biggest game since the 1997 Rose Bowl.

Stanford hasn't played great football at all on the road this year, but they did hand the Sun Devils a beating for three quarters at home the last time these two teams met all the way back in week four. However, this Arizona State team is not the same squad that the Cardinal thumped out of Palo Alto. This weekend's Pac-12 Championship game in Tempe already has all the trappings of an instant classic ahead.

Trent Murphy was robbed of an award that was rightfully his.

Will Sutton, you know that Pac-12 Defensive Player of the Year award is fraudulent. You sit on a throne of lies.

Don't try to deny it or rationalize it because you know it to be true. Murphy's stat line: 51 tackles, 19.5 tackles for loss and a nation-leading 13 sacks. And that gets him a participant trophy like this is some kind of "fun, fair, positive" youth soccer league? Come on now.

I know Will Sutton is an excellent player and that everyone knew he was coming this year, so coaches schemed around him and his numbers plummeted. (I'm a Houston Texans fan, so I also appreciate the immense impact that a great defensive lineman can have on an opponent.) But it's not like opposing coaches didn't know about Trent Murphy this year - and he still had a ridiculous season in which he improved on all of his numbers. Is the strongest argument for Sutton winning Pac-12 Defensive Player of the Year really that "He was double-teamed all season long?" What's the best argument for Murphy not winning the award? Not enough pick-sixes?

This must all be a conspiracy among Pac-12 coaches to make sure that Murphy doesn't win the award. 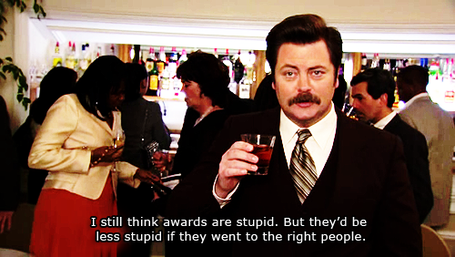 God, awards are so stupid.

Heralded Oregon quarterback Marcus Mariota decided he is going to stay and play for Oregon next year, giving the Ducks a little extra continuity as they try to make one more run at a BCS national title. This certainly affects the Pac-12 North race, as Stanford will now have to face the deadly Mariota at home with another year of experience under his belt. Had he left early for the NFL, the Ducks would be breaking in a new quarterback against a defense that has stifled them for two years in a row, which would be an ideal scenario for Stanford. But that won't be the case - and the road through the Pac-12 to playoff contention already looks just as difficult in 2014 as it was in 2013.

Steve Sarkisian, the prickly Washington head coach, took his show from the Pacific Northwest to Sunny SoCal this week, shaking up the Pac-12 a little bit. Some fans were quick to bag on the Trojans for making what looks like an uninspired hire, while others were happy that the Trojans kept their search refined to a guy who "knows what USC is all about."

What an amazing scene! Best fans in America! #HuskyNation #CollegeGameDay

Tell us now how you really feel, Coach.

Other pundits and fans brought up more directly relevant on-field queries. Sarkisian faces some serious questions about whether or not he's capable of being the guy who brings USC back to perennial playoff contender status. He's a meager 24-21 in the Pac-12 during his time at Washington, which raises some doubts about his ability to get a team to take that next step into the upper national echelon. Perhaps the best way to phrase it: The question is not "Will Steve Sarkisian win games at USC?" but "Will he win enough games at USC?" There's a big difference between those two things. From my perspective, it reminds me of when Alabama spent years trying to hire within the "family" - trying to hire "Bear's Boys" - and it let to a decade of mediocrity. But only time will tell if the Sark-led Trojans will be the early 2000s Crimson Tide or the Tide of 2009 and after.