Away from Stanford Stadium, the Cardinal has gone from good, to bad to worse inside the 20.

For some Stanford fans, the greatest source of consternation about Saturday's Pac-12 Championship against Arizona State is not that the Sun Devils are much improved since September (and they are), but that the game will not be played at Stanford Stadium. The road has not been kind to the Cardinal in 2013, particularly when it comes to the Stanford offense, and especially in the red zone.

Stanford drops from #1 in the nation (sole possession) to #109 in nation in red zone efficiency when moving from home to road. (!!!!)

The disparity between red zone production at home and on the road is most evident in the passing game.

Consider: Kevin Hogan had more completions in the red zone in Stanford's 42-28 win over the Sun Devils on Sept. 21 (4) than he has had in the Cardinal's five road games combined (3). Hogan's road red zone numbers are nightmarish: 3-for-16, one touchdown, two interceptions. At home, he's 12-for-20 with five touchdowns and no interceptions.

Here's a game-by-game look at Stanford's red zone performance on the road. (I won't blame you if you skip the Utah and USC games.) 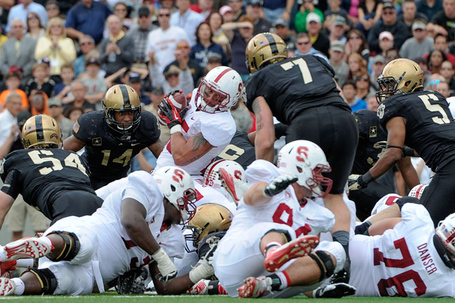 Stanford scored on all three of its red zone trips against the Black Knights. Tyler Gaffney accounted for both touchdowns, the first a 23-yard touchdown reception and the second a 1-yard run. The touchdown catch came after a personal foul penalty bumped the Cardinal out of the red zone, so it isn't reflected in the play selection breakdown or Hogan's red zone passing stats above, but it does count as a red zone score. The Cardinal's red zone field goal came after Devon Cajuste was ruled out of bounds on a 14-yard catch late in the second quarter. 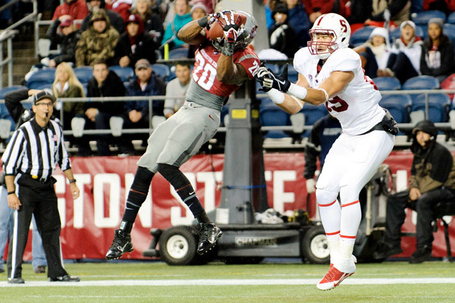 Stanford scored offensive touchdowns from 57, 33, 45, 53 and 22 yards against the Cougars, which more than made up for the Cardinal's red zone inefficiency. The ugly blemish: Hogan forced a second down throw to Cajuste that was picked off by Deone Bucannon. 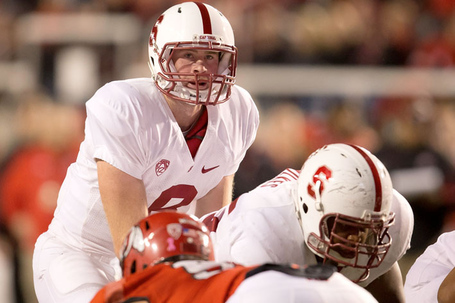 Trailing 27-21 in the final minute, Hogan threw incomplete on 3rd-and-2 at the Utah 6. Following a Stanford timeout, he threw incomplete again to cement an awful loss. The Cardinal needed a touchdown because a first quarter drive that stalled at the Utah 21 ended with a 38-yard missed field goal by Jordan Williamson. 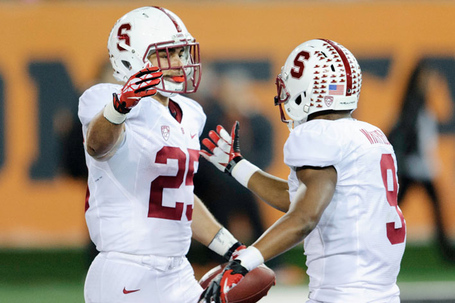 Three of Stanford's four plays inside the red zone were runs by Gaffney and two of those resulted in touchdowns. The other play was a run by Dallas Lloyd, which resulted in a lost fumble. 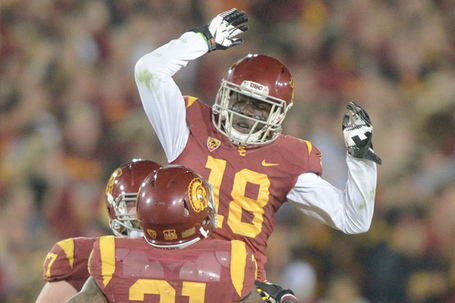 Stanford's most inefficient red zone performance of the season featured a drop by Ty Montgomery, a blocked field goal and, with the score tied at 17 early in the fourth quarter, a Hogan completion to Dion Bailey, who plays for USC.

Here are some more interesting numbers via cfbstats.com and the play-by-play summaries on GoStanford.com.

One of the completions at home was a 14-yard touchdown pass by Evan Crower in Big Game.

The disparity in red zone production is not as great on the ground.

Without the multiple tight end targets Stanford has enjoyed the past few years, the Cardinal is passing a lot less in the red zone this season.

So what about Arizona State?

Ideally, Hogan bypasses the red zone and finds Cajuste, Montgomery and Michael Rector for multiple long touchdown passes, but chances are he will attempt a pass or two inside the 20. When he does, let's hope he finds a way to imagine he's at Stanford Stadium, where the Cardinal scored on all six of their trips to the red zone against the Sun Devils in September. The Cardinal can't afford to leave points on the field against the best team they've faced on the road all season.