Cardinal in the NFL: Matchups to watch on the 2014 NFL Schedule

Stanford's made a major impact on the NFL the last few years... so which games should you be watching this fall?

Share All sharing options for: Cardinal in the NFL: Matchups to watch on the 2014 NFL Schedule

You can't avoid Richard Sherman. Or Andrew Luck. Or Jim Harbaugh. Not with how powerful the NFL is today.

Thankfully, the former Cardinal players (and coaches) pepper the NFL schedule enough that they help make the entire season compelling, even if your team is out of the running before their bye week.

So here's a few games to watch this fall, with even more to pay attention to after the NFL Draft:

Week 1: The Dolphins' Michael Thomas picked off Tom Brady in his first NFL game, and he meets the Patriots again in the first week of the season. The Packers and new signee Chase Thomas meet the Seahawks, and the Chargers take on the Cardinals in a meeting of Thomas Keiser and Stepfan Taylor.

Week 2: Colts vs Eagles. Andrew Luck, Griff Whalen and Pep Hamilton get another shot at a team coached by Chip Kelly that wears green. Except this time Kelly has Zach Ertz on his side. Kelly's Ducks foiled the Cardinal in back-to-back years in 2010 and 2011, so this will be a long-awaited shot at revenge.

Week 3: Colts vs Jaguars. Andrew Luck and Toby Gerhart. The two guys that catapulted Stanford to the top of the college football world now meet twice a year.

Week 4: 49ers vs Eagles. Jim Harbaugh did beat Chip Kelly way back in 2009, and let's hope this meeting is as compelling as the Cardinal's 51-42 upset over the Ducks.

Week 8: Steelers vs Colts. David DeCastro goes against Luck and Whalen in a Class of 2012 reunion.

Week 9: Buccaneers vs Browns. If we're lucky, we might get to see Johnson Bademosi cover Chris Owusu.

Week 12: Cardinals vs Seahawks. With Richard Sherman, Doug Baldwin and Stepfan Taylor all on the field at once, this game feels very much like the 2011 Orange Bowl. 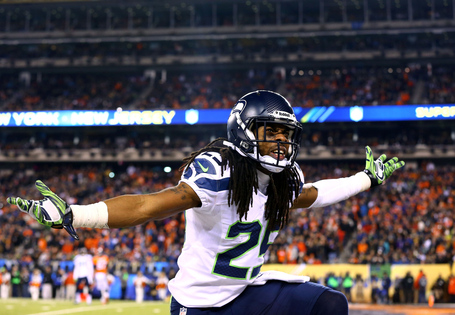 -- Are you not entertained?