There's nothing that sets an opponent on their heels quite like a well-executed deep throw, even if it's incomplete. A deep strike sets fear into an defensive coordinator that your offense is willing and able to hit a back-breaking, game-changing play at any time.

Stanford was superb at the deep throw in 2013, with a cadre of speedy receivers who were able to track down Kevin Hogan's bombs. One of the best deep throws of the year was the second play of the 2014 Rose Bowl, where Hogan connected with Michael Rector on a 43-yard pass that was the key piece on the Cardinal's opening scoring drive.

This play was one of my favorites of the year because it was expertly planned, perfectly executed and it hearkened back to one of Hogan's best throws ever.

It's 2nd and 9 from the 25-yard line, and Hogan lines up with two backs in the backfield, Ty Montgomery in a tight split to his left, Devon Cajuste split tight to his right, and Rector lined up just inside the numbers on the far side of the field. 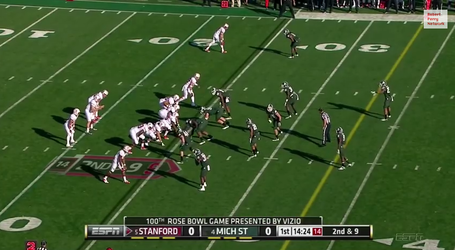 Pre-snap, Ryan Hewitt motions from Hogan's left to the far right side of the field, taking Michigan State star cornerback Darqueze Dennard with him. Dennard was lined up over Montgomery, with the intent of taking him man-to-man, but he's now forced to cover the widest man on the field. 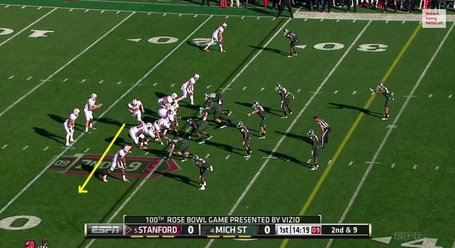 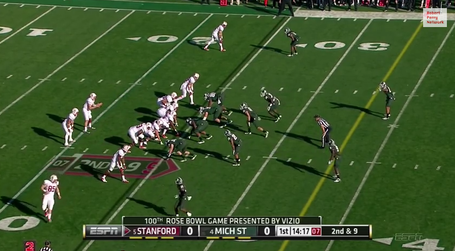 You can see Dennard shuffling out to single up Hewitt, while the nickel back lined up inside is now tasked with covering Montgomery.

At the snap, Michigan State brings the middle and right outside linebacker on a blitz, which Stanford picks up by keeping Tyler Gaffney in to block - he picks up the middle linebacker.

Cajuste runs right in between the two high safeties and camps out, while Montgomery runs a shallow drag route across the formation. Meanwhile, Rector is in single coverage on the far side of the field, and he runs a deep post behind the coverage, which is camped out around the first down line. 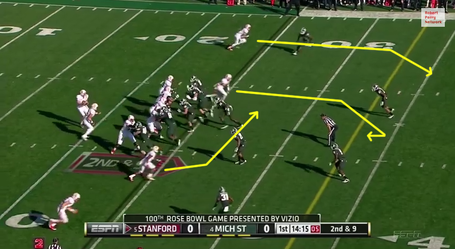 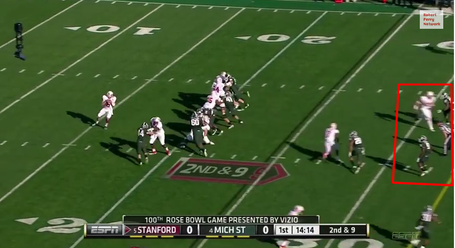 When Hogan lets the ball go, there's nobody but Rector with a play on the ball. The completion flips the field over and the Cardinal is in business. 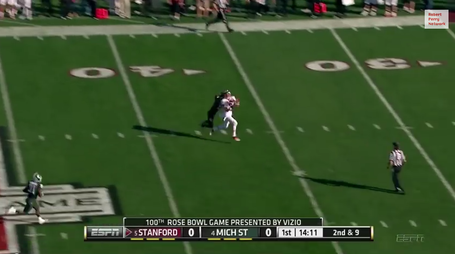 Another look from the skycam shows just how open Rector is when he breaks inside on his deep post. 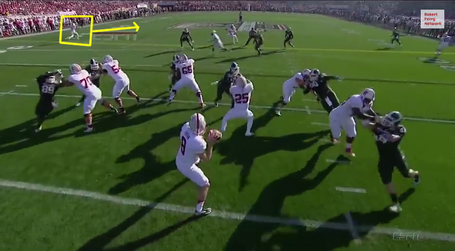 The blocking gives Hogan all the time he needs, while the route combination holds the two deep safeties unable to make a play. It's perfectly executed in every element.

Not only did I enjoy how successful this play was, but I also was thrilled to see the coaches adapt a play that had worked in the past and use it again in a big game. The last time a variant of this play worked with such success in such a big spot was against UCLA in the 2012 Pac-12 title game.

The setup for this play is slightly different, but the themes are all the same. Kelsey Young lines up in the backfield next to Hogan, then motions out wide. The UCLA defense is lined up in man coverage, which Hogan can tell because the linebacker tasked with covering Young starts to split out wide with him. 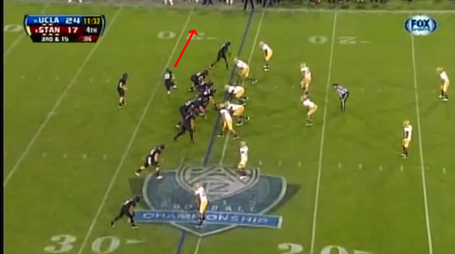 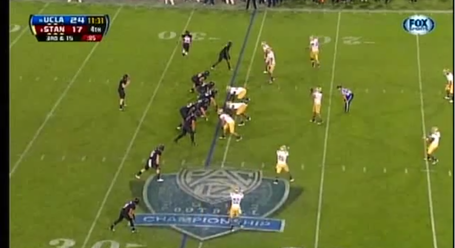 However, as you can see in the frame above, the UCLA defense checks their coverage (I count three guys making X's with their arms), and the cornerback shifts out to cover Young. 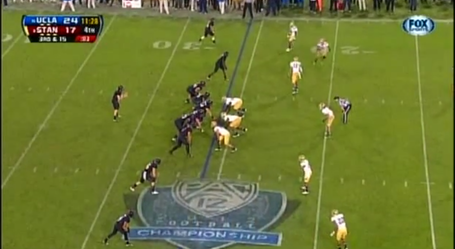 With everyone backing off, it ends up being a 3-man rush, with five receivers against seven defenders. The route combination is quite similar to the one used against Michigan State - there are just more men in the pattern. At the bottom of the screen, Drew Terrell takes off on a go route to the corner of the end zone, while the two inside receivers run post patterns to suck the two safeties into the middle of the field. On the other side, Jamal-Rashad Patterson runs a drag route. 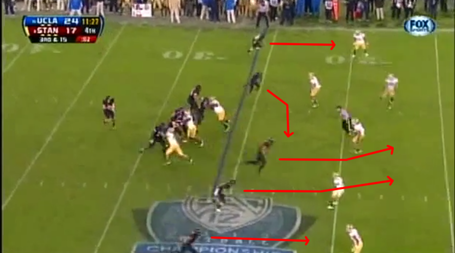 Once again, there's no pressure on Hogan until he lets the ball go (he gets clobbered once the ball is out of his hand) and Terrell is wide open with nobody even on screen when he catches the ball for the game-tying touchdown. 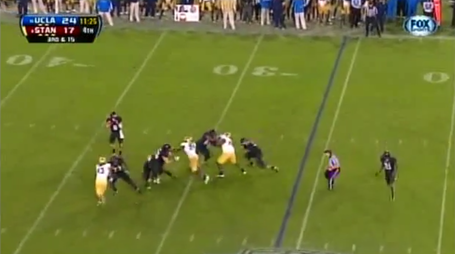 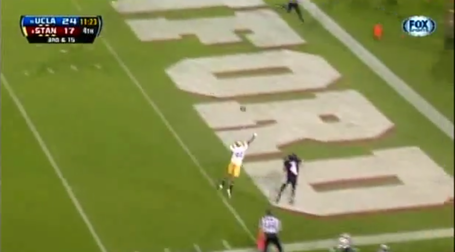 In two critical situations, the Stanford coaching staff went to a variation of the same play, and they proved the thing we all loved about NFL Blitz: Da bomb can always work.