Check out this great fanpost

***Editors Note: This article was originally submitted as a fanpost by user AlexJKirby of Coachtube.com we are resubmitting it here. If you would like to submit your own fanpost we strongly encourage you to do so here. If it is great, we'll probably move it to the front page like this one.

"So what kind of offense do you run?"

A lot of coaches hate that question, because people have a tendency to over-simplify everything, and wrap a bunch of different concepts into a label that isn't really that accurate.

Coaches steal ideas from one another all the time, and the great ones find ways to do it in a way that adds to what they already do well.

Stanford's offense is an interesting combination of old-school smashmouth football, traditonal West Coast Offense concepts, and some of the best ideas the spread offense has to offer.

While David Shaw's teams take pride in their ability to dominate the line of scrimmage, and few in the college game have a better understanding of how to coach offensive line, that doesn't mean they don't know how to stretch the field in all different directions.

Today we'll look at a play out of the Cardinal playbook that utilizes a couple of old school concepts but still holds the door open for some improvisation on the part of the quarterback.

This play starts out in a 4x1 set that forces the defense into an uncomfortable position. 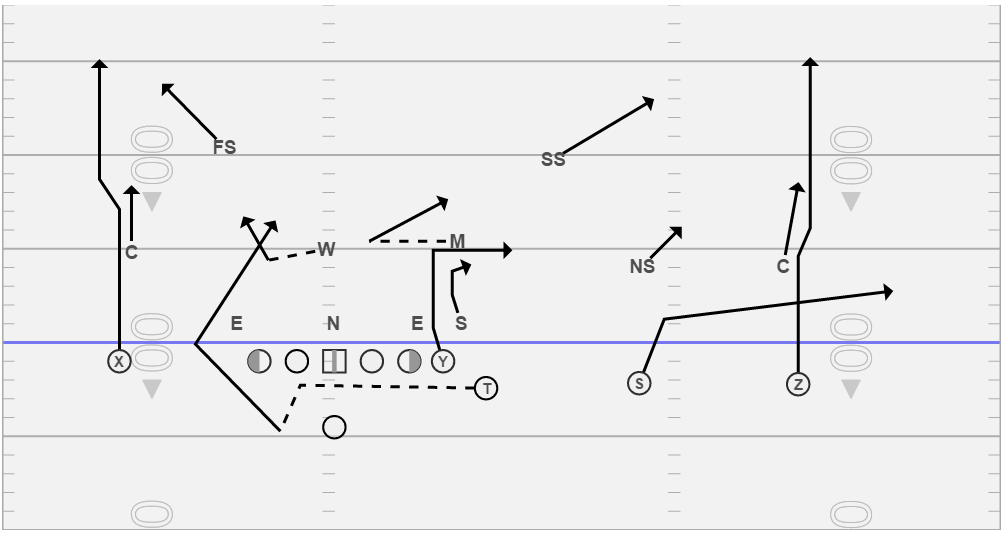 The linebackers are over-shifted to the four receiver side, but the tailback motion brings them back in the box and cleans up the look to the edge a tiny bit.

On this play you've got two classic and time-tested concepts, the stick concept and the Texas concept, both crammed into a play that gives the Cardinal offense maximum flexibility.

Let's take a look at the different ways this play can work out.

The Stick concept to the trips side

You're probably familiar with the stick concept, something every team in football runs in some form or another. It's an easy way to flood underneath coverages and get the football out of the quarterback's hands in a hurry.

Still, there's the problem of leverage. A linebacker with outside leverage on the tight end, lined up in a 9 technique shouldn't let the route outside of him, but that's just on paper.

With heavy outside leverage on the route, a lot of teams would let the TE sit down here on the inside and present his numbers to the QB, but not Stanford. They're aiming to win that one-on-one every time.

They want him to fight through the coverage (within the rules of course) and get to the inside of the opposite hash (and take a couple of defenders with him).

The slot receiver running the flat route out wide has opened up a good amount of space in between the hash marks, and the Cardinal offense wants to take advantage of it.

Still, there are plenty of other possibilities with this play, even if the defense succeeds in taking away the stick concept.

The Texas Concept to the single receiver side

Stanford loves the trips formation, especially when they're trying to get the back involved in the passing game.

The Texas concept is one great way to do this, even though in this case it's a very simplified form of it.

While the stick route occupies the Mike, the Texas (or angle route) removes the Will from the box. The route is designed to attack vacant area in the middle of the field once the defense has dropped to cover some other concept.

In this situation, and against this defense, the tailback ends up being matched up on the Will linebacker. The route widens him, then gets his body turned and chasing the back as he breaks back to the inside.

The angle route can also be used as a hot route when he breaks back to the inside, especially if that Will decides to blitz instead of drop into coverage.

But what if neither option looks good? What if the defense covers up both of them nicely?

Is that a bad thing?

Of course not, it's just another opportunity.

The QB can take off running

Running through this scenario is like running through regular quarterback drills at this point, since most of the time the decision is pretty easy.

Not only are the two inside linebackers occupied and widening, they've got their back/hips turned, so they can't pursue as easily.

Remember, this isn't a video game. It takes a while to stop your momentum, get your whole body turned, and then start pursuing the quarterback. When the defenders have already turned and run to follow the offensive players, that means there's no one watching the passer, and that's when big, exciting plays happen.

If the defense decides to completely ignore the threat of a running quarterback, and the pass rush doesn't collapse the pocket or even stay on the same level as the passer, it's an easy choice for the passer to take off running.

The great thing about plays like this is that with the athletes Stanford has, any of these possibilities can become realities.

Obviously players win games, but the ability to repackage older schemes with new twists and formations has given the Cardinal another schematic advantage on Saturdays.