Comparing Stanford's Attendance and Enrollment to the BCS Top 20

Share All sharing options for: Comparing Stanford's Attendance and Enrollment to the BCS Top 20

If you're tired of the commentary on the attendance at Stanford home football games, I would suggest you ignore this post and read about Tara VanDerveer's impressive 2011 recruiting class, or check out GoStanford.com's interview with Landry Fields. There will be basketball posts 'round here in the coming days, I promise. But for now, it's back to the attendance issue--this time with numbers!

The Daily Axe posted a solid analysis of all the chatter about the empty seats that followed Stanford's nationally televised 42-17 win against Arizona. One of the points raised in their post is that Stanford's small undergraduate population puts the school at a disadvantage in terms of filling seats. I think it's a safe assumption that Stanford must rely on interest from the local community and non-alumni more than most schools in the BCS Top 20 when it comes to selling tickets.

The second column from the right displays undergraduate enrollment as a percentage of each school's stadium capacity. The final column ranks the BCS Top 20 by this measure. 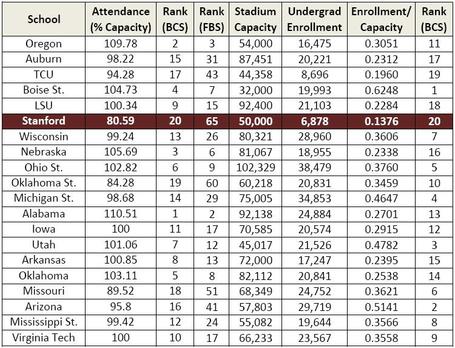 Select this link to view a PDF version of the chart: BCS Attendance Chart

You'll notice that Oregon's attendance as a percentage of capacity is greater than 100%. While Autzen Stadium's capacity is listed at 54,000, the standing room only crowd brings the average attendance for Ducks home games to around 60,000.

As you can see, Stanford's attendance as a percentage of capacity (80.59%) ranks last among the top 20 schools in the BCS. Stanford also has the smallest undergraduate population among the BCS Top 20, and its undergraduate enrollment as a percentage of its football stadium's seating capacity is the lowest of all the schools in the sample. TCU is most similar to Stanford. The Horned Frogs have a slightly smaller home stadium and a slightly larger undergraduate population.

What does this tell us? Nothing new, really, but I think the chart provides an interesting snapshot of one of the factors working against Stanford.

(Disclaimer: I created this spreadsheet rather quickly, so there's a chance--probably somewhere close to Stanford's enrollment/stadium capacity percentage--that it includes at least one mistake. Let me know where I went wrong in the comments. Undergraduate enrollment numbers were taken from Wikipedia.)