No, it's not just you. This is great news indeed. Bob Bowlsby says he offered Jim Harbaugh a contract extension and Harbaugh indicated that he plans to accept it. | Mercury News

In other great news, Stanford is headed to the Orange Bowl, where it will face Virginia Tech on Jan. 3. | GoStanford.com

Say it again and stop complaining (for a minute, at least): STANFORD IS GOING TO A BCS BOWL. That just rolls off the tongue, doesn't it? | Go Mighty Card

Sione Fua on the new rule that kept Stanford out of the Rose Bowl: “I feel like if we had still gone to the Rose Bowl and not won the Pac-10 it would have been a little weird." | Stanford Daily

Still, a Stanford-Wisconsin matchup in the Granddaddy of Them All would have been pretty sweet. | Mark Schlabach

Don't expect a lot of students to take their talents to South Beach. | The Daily Axe

A couple of students started a petition for President Hennessy to excuse absences on the first two days of Winter Quarter. | Clemency from Hennessy

From the Orange Bowl website: THE Ohio State Stanford University? 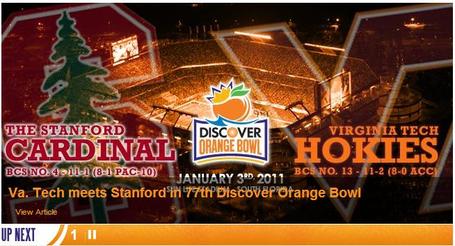 And finally, a bit of a bad news. A spectacular season ends in bitter defeat for the Stanford women's soccer team, which lost to Notre Dame, 1-0, in the College Cup final. | Mercury News