Stanford lost to Butler, 71-66, tonight at Maples Pavilion. The Cardinal had plenty to do with its second loss of the season. It committed 16 turnovers, including 7 in the first 7 minutes of the second half, as the Bulldogs turned a 31-26 halftime deficit into a 44-39 lead. It shot 62% from the free throw line. It allowed Butler to shoot 6-for-9 from 3-point range after the break. But there wasn't much that Johnny Dawkins' squad could've done about this:

Trailing by four with a minute to go, Stanford elected not to foul. The Cardinal got the stop it needed, or so it appeared when Chase Stigall threw up a prayer from well beyond the arc. But the ball banked off the glass and right to Andrew Smith, who beat the shot clock with a layup to give Butler a 66-60 lead.

The unlucky bank was preceded by a bad call a couple of minutes earlier. As you can see in the photo below, the ball was still in Ronald Nored's hands when the shot clock hit 0. Officials ruled the shot was good, extending Butler's lead to 62-55. 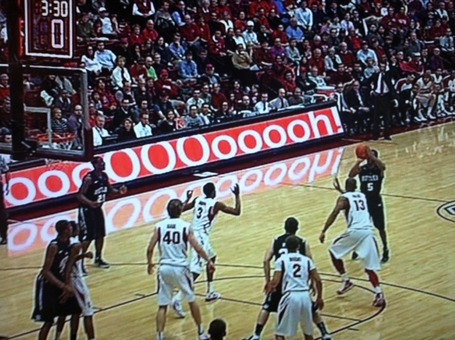 There were some bright spots for Stanford, most notably Josh Owens (17 points and 9 boards on 7-of-10 shooting), Chasson Randle (16 points, 3 assists), and John Gage (12 points).