The Pac-12 and Big Ten (which had 11 teams and a clever logo from 1990-2010 and now has 12 teams, but who's counting?) announced a scheduling agreement today that will enable each conference to expand its brand recognition without, well, expanding.

"To me this is a creative and inventive approach through collaboration to achieve some of the same objectives that expansion can help you with," Pac-12 commissioner Larry Scott said. "It gives our conference more of a national platform, more play on the Big Ten Network and higher quality programming on our network without having to expand."

The deal calls for each football team in the Pac-12 to play a team in the Big Ten each season beginning in 2017. Pac-12 teams in other sports can expect to play more games against Big Ten teams as early as next season as part of the agreement. In addition to improving teams' non-conference strength of schedule, the Pac-12-Big Ten football games will provide better programming for the conferences' respective television networks. Pete Thamel reports that the games could be held at neutral locations, such as the Rose Bowl or Soldier Field. 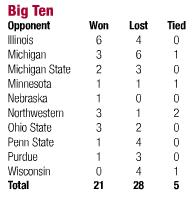 Earlier this year, Stanford and Northwestern announced a four-game series to begin in 2019. Here's hoping the Cardinal plays two different Big Ten teams in 2017 and 2018. Stanford vs. Michigan at The Big House or Ford Field? Stanford vs. Ohio State at the 49ers' new stadium? Awesome. I'm a big fan of the deal. What do you think?