Andrew Luck won the Maxwell Award as the nation's best player at tonight's College Football Awards Show. It was a nice way to end the night after Stanford fans and players watched Robert Griffin III win the Davey O'Brien Award for the nation's best QB, David DeCastro get snubbed, and SEC players win almost every other award. (The SEC only tied the Big 10, Pac-12, and Big 12 for most players on the AFCA Good Works Team, so, yeah. In your face, SEC!) 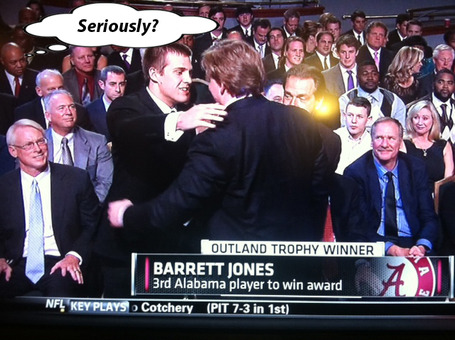 DeCastro was a finalist for the Outland Trophy, awarded to the nation's top interior lineman, but it went to Alabama's Barrett Jones. Former Stanford lineman Ben Muth, who contributes to Football Outsiders, took voters to task for picking Jones over DeCastro, calling it the worst award decision since Dennis Eckersley won the MVP as a closer with the A's in 1992. DeCastro's current teammates weren't happy either.

DeCastro, of course, was all class, congratulating Jones via Twitter after the show.