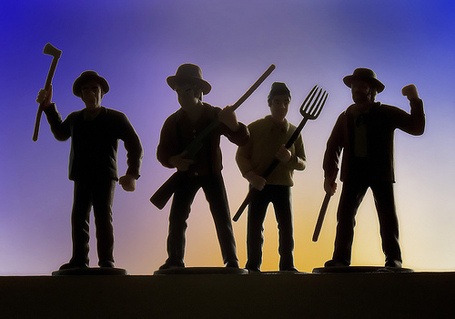 Why do pictures of Robert Pattinson show up when you search for "angry mob" on Flickr? (via Robert Couse-Baker)

Just over 24 hours have passed since California Watch published (via The Stanford Daily) their investigative report on the Athletic Department distributing (via the Athletic Academic Resource Center) a well-known list of classes that would help student-athletes balance their practice schedule with their academic obligations (a list egregiously referred to as a list of "easy courses" by California Watch/the Daily).  Understandably, many people are furious for one reason or another, from students to alums to even administrators.  TUSB seemed to imply that campus email lists are abuzz about it (speaking of, why do these types of big controversies always occur during Dead Week?).

First up, remember Donald Barr?  He of "(Stanford) accommodates athletes in the manner that they accommodate students with disabilities," infamy?  Yeah, he wasn't happy.

He sent an email to several of the writers of the story in addition to Comm 177I professor Mark Katches (who also oversees California Watch)  that leaked out to campus lists.

I want you to know that I was shocked and deeply offended in reading a news story in which you egregiously misquoted me.  I must ask that you immediately retract your story, and notify all those who have quoted it of your error.

You know it's not a good email when you open your inbox and the title of your first email is "misquotation."  [The Unofficial Stanford Blog]

Junior rower Ryan Sudeck, another quoted source in the story, has been another very vocal opponent of the story, claiming that the person who interviewed him acted in an unethical (illegal?) manner.  He's been making the rounds on nearly any site that has posted the report and telling his side of the story about how and why he was quoted.  (Come comment here!  Bring your friends!)  [TUSB, ESPN, SFGate, and several more]

Mark Katches of California Watch released a statement today standing by the story as it was published and that any claims of unethical behavior would be investigated.  [California Watch]

Speaking of statements, as Scott pointed out earlier today, the Daily's Editor-in-Chief, Zach Zimmerman, released a letter stating why the Daily published the story despite having no editorial control over it as well as justification for why the Daily should release this kind of a story.  [The Stanford Daily]

Eccentric Daily sports editor and occasional columnist Wyndam Makowsky on some of the behind-the-scenes discussion that took place before the story was published.  [The Stanford Daily]

There's been a ton of discussion on the subject across the interwebs.  If the comments section on the Daily's website is any indication (over 140 comments when they're lucky to reach two on most stories), expect a very long "Letters to the Editor" section when the Daily returns after Spring Break.  For now, gleeful Cal fans concerned Stanford fans will have to make do with comments sections such as that for the Chronicle's published story.  [SFGate]

Mercury News blogger Jon Wilner makes a semi-veiled accusation that getting into Stanford is difficult -- doing well at Stanford is the easy part.  Agree?  [College Hotline]

Finally, if you're looking for some student perspective on this whole fiasco, check out TUSB and Fiat Lux for several posts and commentary.