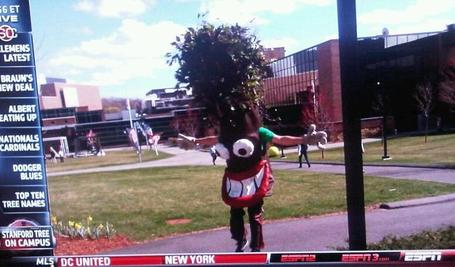 The Stanford Tree was in Bristol, CT, and made an appearance on today's SportsCenter in honor of Earth Week. Keeping with the theme, the show featured the Top 10 tree names in sports, including Charles Barkley, Warren Sapp, Ryan Leaf, and, of course, Tree Rollins. I took a stab at creating a list of the Top 10 tree names in Stanford sports. Let me know who I left out in the comments.

Injuries derailed the former Gatorade Missouri Player of the Year's career on the Farm, limiting her to 17 games in her first three seasons. Okafor averaged 3.6 points and 3.2 rebounds in 32 games in 2005-06. According to the Fast Break Club, she went on to attend Duke Medical School.

Barker, a lineman and linebacker, lettered for the Cardinal football team from 1975-77.

Woodward lettered for the Stanford baseball team from 1922-24.

Triefenbach helped lead the women's volleyball team to a 32-1 record and a national title in 1994.

Branch, a safety at Stanford from 1999-2002, was selected by the Carolina Panthers in the third round of the 2003 NFL draft. He played three seasons for the Panthers and retired after being released by the Raiders in 2007.

Root was a three-time All-America as a volleyball player at Stanford and earned a Gold Medal at the 1988 Summer Olympics.

Maples, Class of 1904, was the principal donor for Maples Pavilion, which was dedicated in 1969.

Woods was a two-time All-America and the 1996 NCAA Individual Champion during his two years on the Farm. If you're wondering, he didn't make ESPN's Top 10. Kerry Wood did.