Stanford Not Good At Being On the Receiving End of Trickery; Duke Kicker is REALLY Bad; Pac-12 Does Better

Share All sharing options for: Stanford Not Good At Being On the Receiving End of Trickery; Duke Kicker is REALLY Bad; Pac-12 Does Better

Did you miss the Orange Bowl last year?  Fall asleep before kickoff last January?  Had a hot date that you couldn't say no to that cool Monday night at the beginning of the year?

Fear not, Stanford Cardinal fans.  Stanford loved its Orange Bowl performance from last year so much that they decided to have an encore performance.  Right down to making the unranked Duke Blue Devils look like 2010 ACC champion Virginia Tech.

This game, like the OB, can be broken up into two halves.  First, the front 30:

-- Offense: TERRIBLE.  The O-line?  Even worse.
-- Defense: Head-scratching; threw in a few "where's the ball?" CBs and Safetys, as well as allowing the conversion of a 4th and 9 - AFTER a 5-yard penalty
-- Special Teams: Fooled by a fake punt and an early onside kick

After a halftime that saw more than a few concerned Stanford supporters, out comes Shaw and the gang and what do we have?

-- Offense: Luck's receivers all of a sudden figured out the art of catching a ball deep
-- Defense: Night and Day considered to the first half effectiveness
-- Special Teams: Jordan Williamson missed a PAT, but other than that, passable

This Stanford team has a LOT to work on for next Saturday's game against Arizona.  The offensive line still is not gelling, and at times seemed worse this week than they did against SJSU.  They allowed Luck to be hurried numerous times, gave him his first sack of the season, and, as Brian Griese was all too willing to point out, allowed defenders to breach gaps unimpeded.

For Andrew Luck, his throwing was improved this week over last.  His receivers?  There were several catchable balls by both TEs and WRs that were thrown almost perfectly to the center of their chests and they still dropped them.  Even the pick-6 seemed like it could have been catchable.  If there's a positive for Luck to take out of this game, its at least he and Stepfan Taylor perfected the flea flicker.

On defense, the day was a roller coaster.  The secondary was exploited worse than Karen Owen's former hookups on powerpoint.  Duke QB Sean Renfree lit up the backfield for significant yardages that gave the Blue Devils several long drives, especially in the first half.  The only reason the score wasn't 17-16 in Stanford's favor at the half was because Duke kickers Will Snyderwine and Jeffrey Ijjas were completely incompetant when it comes to freebie points off of kicks.  But give credit where credit was due, the defensive line was a monster, especially in the second half.  Shayne Skov, Ben Gardner, and Chase Thomas put the fear of [insert your favorite religious deity here] in the Duke quarterbacks, each of them with sacks totaling 46 yards of net loss for Duke.  The run game defense was even better this week than last,  but only up the middle.  RBs who ran towards the sidelines had a little more success against Stanford. 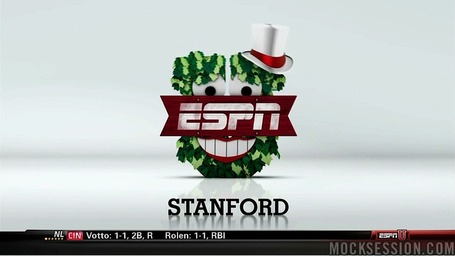 Did we ever get an appearance by this guy this afternoon?  Did I miss him?  (via 30fps.mocksession.com)

Next week, Stanford faces Arizona.  While Arizona did a total faceplant in Stillwater this past Thursday, Stanford's last visit to Arizona Stadium was not pleasant.  Stanford cannot afford to have a repeat performance of testing the strength of Arizona in the first half and then going full throttle in the second.  Arizona is too talented a team to allow that to happen easily.  The Cardinal has its work cut out for it, and we can only hope that the problems that we've seen the past two weeks are addressed -- fast.

The Pac-12 this week fared significantly better than last, although there still were more than a few clunkers.  Then again, almost anything would have been better than last week's performances.

Arizona 14, Oklahoma State 37 - The Wildcats are in far more dire straits than anyone could have possibly imagined.  And as a reward for their lack of ability to compete, they get to see Stanford, Oregon, and USC in consecutive games starting this Saturday.
Missouri 30, ASU 37 - Don't let the box score saying this game went into OT fool you.  This was a mess of a game that saw 23 flags and 224 penalty yards.  On the plus side, Brock Osweiler is making a decent case for consideration as part of the conference's elite QBs.  (Oh, and btw, really ASU? Couldn't come up with something different?)
Wisconsin 35, Oregon State 0 - I'm trying to find something positive in this game, but the only one I could find (Frosh QB Sean Mannion) was the result of a negative (QB Ryan Katz was pulled after three successful plays in OSU's first drive of the game).
Hawai'i 32, Washington 40 - This one was a nailbiter.  Every time the Huskies thought they had begun to pull away, there goes a pick-6 for 99 yards or a fumble into a Hawai'i defenders hands.  On a day that was sunny and bright in Seattle, it was as though everyone's hands were coated with butter and oil given the lost balls on both sides.
California 36, Colorado 33 - An unfortunate way to lose the game for the Buffs (in OT, at that), but CU was a much different (better) team than last week's fiasco in Honolulu.  For Cal, while it was a good win, I can't help but wonder if last year's abysmal road team is back.
Nevada 20, Oregon 69 - Maybe all the Ducks needed to find their lopsided winning ways again was to have another game in Autzen.
UNLV 7, Washington State 59 - Is this even possible?  Is Wazzu actually a GOOD team?  Four more wins, Cougars.
Utah 14, USC 23 - Of course: only the inaugural Pac-12 Conference game would feature a touchdown that was the result of a last second blocked FG in the fourth quarter that was originally disallowed because of an unsportsmanlike penalty by one sideline only to have the touchdown counted two hours AFTER the game.  Good job, Pac-12 officials.
San Jose State 17, UCLA 27 - It wasn't 57-3, but Rick Neuheisal at least turned down the dial on his hotseat a little, if only temporarily.