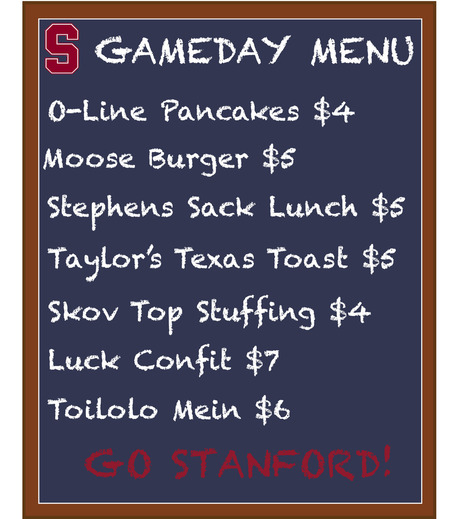 If you haven't heard, there's a Food Truck Festival outside Stanford Stadium before today's season opener against San Jose State. Judging by the lineup of food options available, I probably wouldn't make it into the game. Of course, if you're going to miss a game, this might be the one.

San Jose State was brutal last year. The Spartans' lone win came against Southern Utah, an FCS team, and they're starting a quarterback, Matt Faulkner, whose last start came in 2009 at Mount San Antonio College. Faulkner's dad wrote the Chili's baby back ribs jingle, which is rather awesome. Is the LSJUMB aware of this?

We're three hours from kickoff. Until then, slip into a food coma and share your own Cardinal-inspired menu items in the comments.