Film study: How Stanford and Notre Dame line up against one another

With College GameDay coming to South Bend, here's a pictorial primer on how the Irish and the Cardinal will attack one another on Saturday

Share All sharing options for: Film study: How Stanford and Notre Dame line up against one another

After being torched for 617 yards against Arizona last week, the first concern on Stanford fans' minds is this: how will the Cardinal defense play this week?

A look at the film of Notre Dame's offense shows that the Irish will try and attack Stanford in a slightly different way, running a pro-style, single-back power run game combined with elements of the spread attack that Arizona ran to perfection last week.

Redshirt freshman quarterback Everett Golson (and sometimes junior Tommy Rees) controls an offense that averages a solid 28.8 points per game and is predicated on the success of running backs George Atkinson III, Cierre Wood and Theo Riddick. All three have accumulated more than 200 yards rushing this season, and fourth-string running back Cam McDaniel has over 100 as well.

After reviewing the Irish's 13-6 win in a turnover-plagued game against Michigan, a few things stand out and a basic script emerges on how to counterattack the Notre Dame offense: don't get beat by the run.

Against Michigan, the Irish run game was able to move the ball a little, but didn't have overwhelming success like it did against Miami last week en route to a 41-3 blowout.

However, Michigan didn't stop the Irish runners by stacking the box and blitzing over and over again (and therefore making themselves vulnerable to play-action passes). Instead, the Wolverine defense set up with their linebackers at pretty much the same depth every time - about five yards from the line of scrimmage. As a result, Notre Dame had a lot of two-to-five yard carries, but the Irish were never able to hit a home run on the ground. Note in the images below that no matter which formation the Irish set up in, the Michigan front seven doesn't line up that much differently. 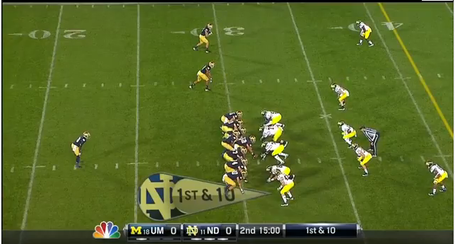 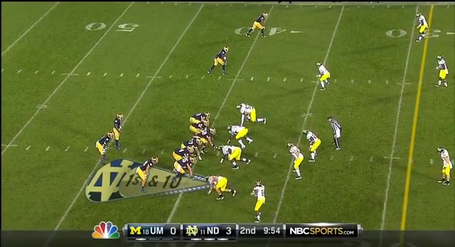 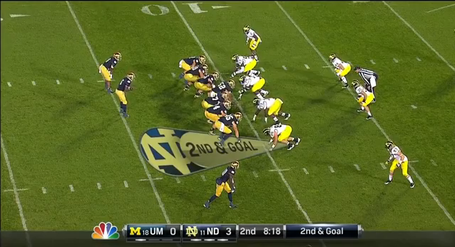 The Wolverines let the Irish gain a few yards on the ground here and there and hoped that Golson would eventually shoot himself in the foot in the passing game. That strategy worked. Golson threw two interceptions in the first half and was pulled from the game. The only big play (greater than 20 yards) that the Wolverines gave up was on a perfect third-down pass from Tommy Rees, which led to the Irish's only touchdown of the game and the Notre Dame victory.

So the playbook for the Stanford defense this week if it wants to beat the Irish has to be much the same - keep the Notre Dame run game quiet, keep Everett Golson in the pocket (he's a very capable runner) and hope he turns the ball over to the Cardinal offense.

Notre Dame wins games because of their defense, which only gives up 7.8 points per game.

More specifically, it wins because of its front seven, highlighted by All-American middle linebacker Manti Te'o and the disruptive defensive line in front of him, including 6-foot-6, 303 pound sophomore Stephon Tuitt.

Take a look at the several different plays from the Notre Dame - Michigan State game and see how the Irish consistently penetrate the backfield and leave offensive linemen flailing after them.

First, the Irish stop a simple run play, even with some solid blocking ahead of the play. 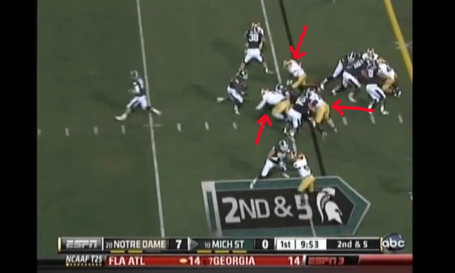 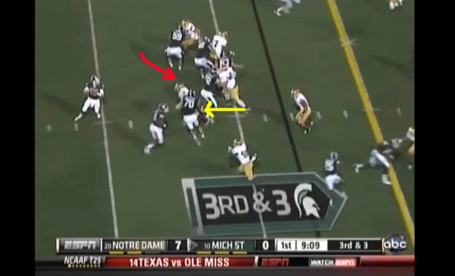 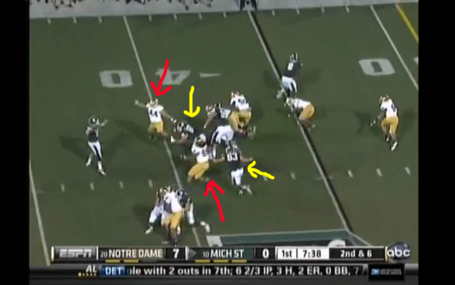 Even with a three-man rush, look how quickly this pass play breaks down and turns into a sack for Notre Dame. 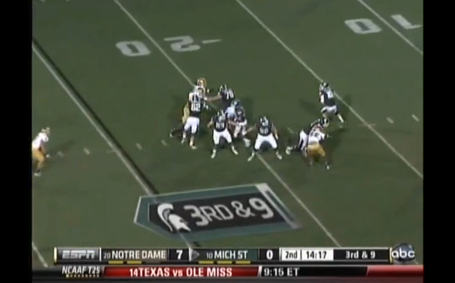 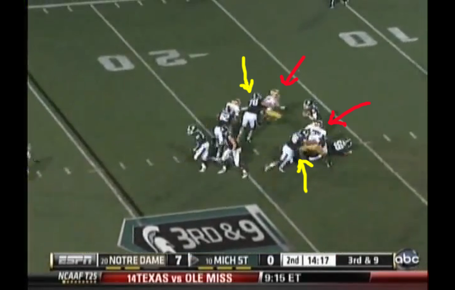 This insane pressure eventually rattles quarterbacks and leads to turnovers. For example, take a look at two plays against Michigan that ended in Denard Robinson interceptions.

In this play, Robinson has his receiver open in front of a defender on a slant route (blue arrow), but Te'o's helmet in already planted firmly in his chest, and the ball is overthrown into the hands of the Notre Dame safety. 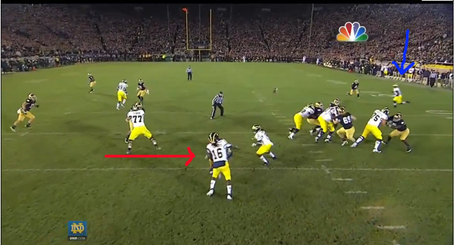 In this one, three guys beat their blocks all at once and swarm to Robinson. He flings a prayer down the field that once again ends up being picked off. 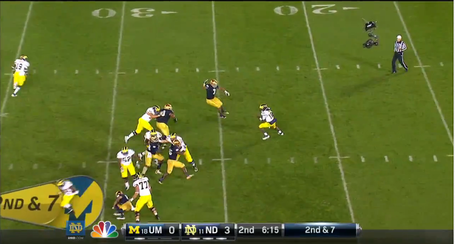 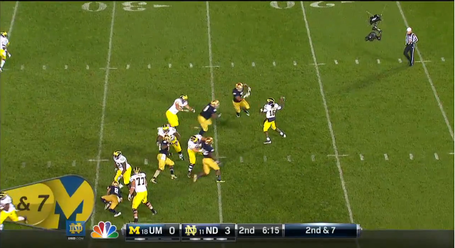 On the flip side of things, Stanford has done a good job protecting Josh Nunes against attackers and clearing holes for the running game so far this season, particularly against USC. Let's look at Stepfan Taylor's 59-yard touchdown run from that game to see how the Cardinal offensive line works its magic. 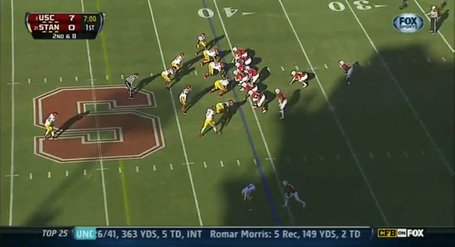 The Trojans are piled up near the line of scrimmage, but as the play develops, the Cardinal offensive line is able to get a blocker on every first-level defender and every second-level defender and push them all backwards. The only Trojan left unblocked at the snap is eventually blocked out of the play by Levine Toilolo (red arrow), who pushes his man so far up the field that it cuts off any hope for a tackle. This leaves a big lane for Taylor to cut back and run all the way to the end zone. 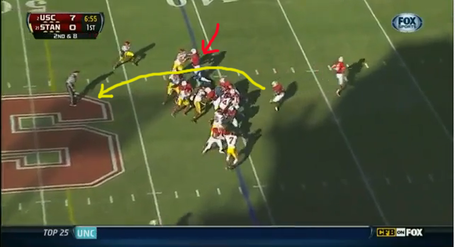 Simply put, this is what Stanford needs to do to have success against the Irish: get blockers downfield on Te'o and company and not allow them to cross the line of scrimmage.

But let's look at a team that Stanford struggled against in the run game - Washington - and see why they were successful against the Cardinal.

The Huskies held Taylor to just 75 yards on the ground, and they did it with great defensive line play.

Let's look at this run in the fourth quarter against the Huskies. It's the exact same play as the touchdown run against USC (to the other side), but it goes for a four-yard carry instead of a touchdown.

Here's the pre-snap look. Again, it's exactly the same as the USC play. 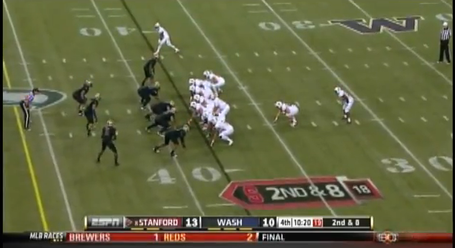 And here's the play in action. Notice how the Washington defensive line ties up the Cardinal blockers right at the line of scrimmage, leaving the Husky linebackers to roam free on the second level of the play. 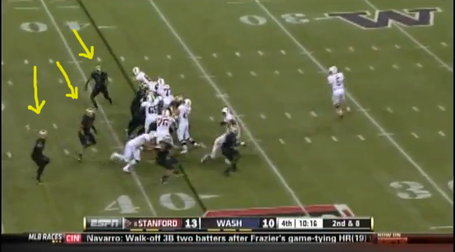 As evidenced by the plays above, Notre Dame presents a very difficult challenge with its defensive line, and if Te'o and the Irish linebackers are allowed to run free like the Washington linebackers were, it could be a long day for the Cardinal.

With Stepfan Taylor and the rest of the run game likely to be held in check, the pressure will once again shift to Josh Nunes and his ability to find success in the passing game. With Ty Montgomery out for Saturday's game in South Bend, the Cardinal will need production from its tight ends (as usual) and some other playmakers (perhaps Kelsey Young or Jamal-Rashad Patterson) if it wants to pull out the win in this one.