Film Study: How Stanford and UCLA will rumble in the Rose Bowl on Saturday

Stanford's shot at the Pac-12 north division title is on the line in the Rose Bowl, so here's a pictorial primer of what to expect out of UCLA

Share All sharing options for: Film Study: How Stanford and UCLA will rumble in the Rose Bowl on Saturday

This week's matchup couldn't get much bigger for Stanford.

Win, and you're playing for a Pac-12 title and a shot at the Rose Bowl. Lose, and you're going to end up in the Alamo Bowl or Sun Bowl.

Thankfully for the Cardinal, they've already had a letdown game a week after a big win (the USC - Washington stretch) and UCLA is also coming off a huge upset of USC, so they'll be amped up as well. High emotions and high stakes - just what you want in the last week of the season.

With all of that in mind, let's take a look at how the two teams will attack one another on Saturday in the Rose Bowl.

I reviewed UCLA's film against Oregon State - a game that the Beavers won, 27-20 - to show how each team will try and roll into the Pac-12 Championship.

The Bruins run their offense out of two sets - a shotgun formation with a running back in the backfield or a pistol formation where the running back stands slightly behind the quarterback, Brett Hundley.

The Bruins' offense runs through their explosive tailback, Johnathan Franklin, who is the nation's fifth-leading rusher with 1,441 yards (131 a game).

For my video review, I picked the Bruins' early-season home loss to Oregon State because the Beavers held Franklin to just 45 rushing yards - his lowest total of the year - and I wanted to see how they stopped Franklin and pulled out the win in the Rose Bowl.

Simply put, the Beavers were able to ruin Franklin's running rhythm and, consequently, the Bruins' offense. They were able to do it because Oregon State consistently found ways to defeat blocks and stop Franklin's runs in the backfield.

Let's look at a play from the first quarter that demonstrates what I'm talking about. Here's the pre-snap setup, with the Bruins in their normal pistol formation. 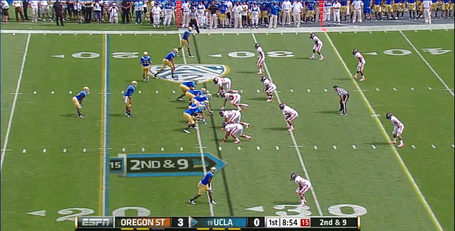 At the snap, the Beavers' defensive tackle splits right through the right side of the offensive line, dragging two linemen with him into the backfield. Behind him, the linebacker is able to roam free because the right guard couldn't move on to get a block on the second level. 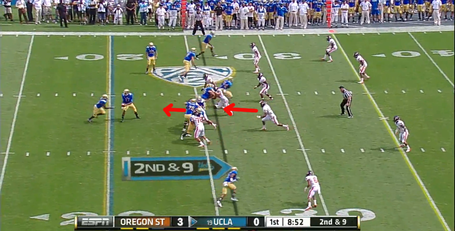 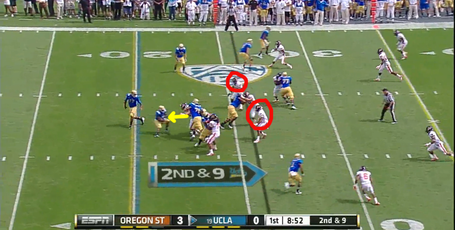 As you can see, the defensive tackle whams into Franklin and tackles him for a loss, but also notice that two linebackers are unblocked and able to make the play if Franklin were able to slip out of his grasp.

Here's another example of the exact same principle. This time, UCLA will try to run it out of the shotgun, but the Oregon State defensive tackle once again beats the Bruins' offensive linemen into the backfield. 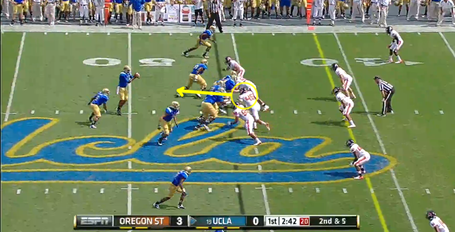 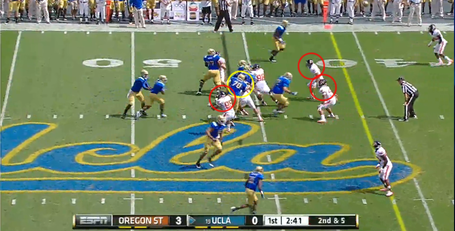 Again, notice that two linebackers are free on the second level (the lineman getting downfield will only be able to block one of them) and the OSU defensive end also comes off the snap totally free. One good play by the defensive tackle gives the other Oregon State defenders the ability to roam all over the field and stop the run.

By beating the UCLA offensive line at the snap over and over again, Oregon State was able to force Hundley into a lot of third-and-long situations, where he struggles as a passer. (He's a very capable runner, though, so Stanford will have to be aware of that.) With Franklin - the offense's engine - sputtering, the Bruins just aren't the same team.

The Cardinal did this exact thing extremely well last week in their upset win over Oregon, and once again, Stanford will absolutely have to defeat blockers at the line of scrimmage in order to stop Franklin and the potent UCLA run game - and they'll have to do it without one of their best, most unsung players.

Terrence Stephens isn't a guy who gets a lot of accolades (although he is a favorite of the media because he gives such good quotes), but he is fantastic at taking on two blockers and defeating blocks at the line of scrimmage. Unfortunately, Stanford will be without Stephens' services this weekend - he'll miss the game due to a family issue.

That means there will be a lot of pressure on David Parry, Ben Gardner, Henry Anderson and the rest of the Cardinal defensive ends and tackles - they must play well if the Cardinal wants to win on Saturday in the Rose Bowl. Put simply: their success at the snap will determine the effectiveness of the UCLA offense.

On the opposite side of the ball, UCLA's defensive is extremely aggressive - sometimes even overly aggressive - and will probably try and throw Kevin Hogan off-kilter with tons of blitzes.

Let's look at a few examples.

On this blitz, the player to watch is the right defensive end (marked by a yellow line). He and the defensive tackle are part of a stunt that's called a TE twist - first, the tackle runs into blockers, and then the end twists behind him, running around the occupied blockers to the quarterback. 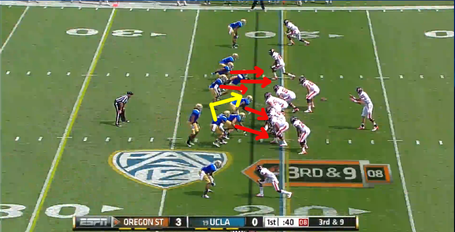 At the snap, the tackle will crash into the gap between the left tackle and the left guard, occupying both of them so that the end can loop around and find his way to the quarterback. On this play, the blitz works to perfection, and Sean Mannion goes down in a heap. 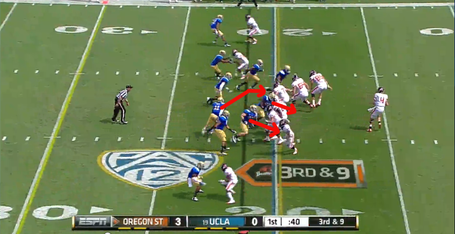 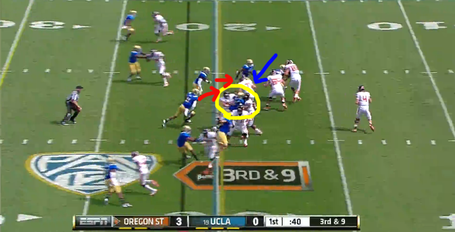 It's nearly impossible for an offensive line to stop hyper-aggressive blitzes like this (notice the one lineman left to block two blitzers marked by the blue line), so Stanford's offense will need two things to counter this aggression - and we'll start with first things first. First, the Cardinal coaches must call quick-hitting plays that capitalize on the defense's over-aggressive style.

Oregon State succeeded in doing both of those things. They accomplished the first goal with lots of play-action passes, screen passes and the occasional jet sweep.

Here's the jet sweep in action: 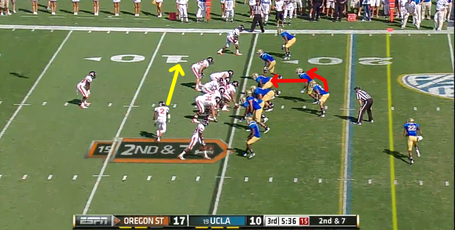 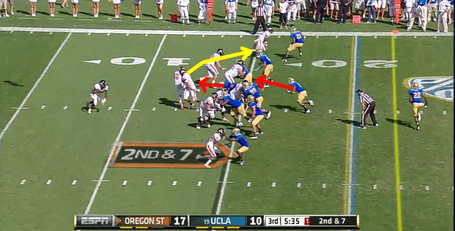 At the snap, the receiver comes across the formation and takes the handoff from Mannion, and the UCLA defense ends up giving up a seven- or eight-yard run. The play ends up working because the two linebackers crash into the line and take themselves out of the play - a textbook example of how to make a defense pay for being too aggressive.

The second thing that must happen for Stanford's offense to be successful is that Hogan must get rid of the ball quickly when UCLA brings heavy blitzes. If he recognizes these blitzes and adjusts quickly, he'll have a chance to make some huge plays that could be the difference makers in what is sure to be a tightly contested ballgame.

Here's one example of how Sean Mannion made those big plays that Hogan will need to make on Saturday.

The Beavers call for a play-action pass where only the two receivers will run patterns while everybody else stays in to block. The UCLA defense starts to swarm to the run when they see Mannion turn and stick the ball out to the running back - notice how the safety begins to storm up toward the line of scrimmage. 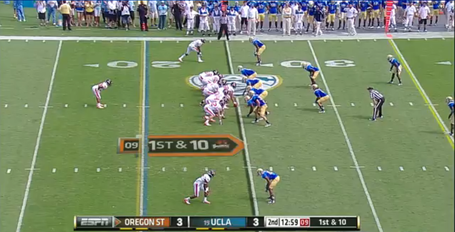 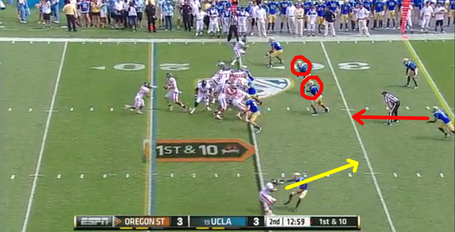 However, when Mannion stands up and looks downfield, he sees that the UCLA defense is out of position to stop the pass - the Bruins' aggression to try and stop the run means that nobody is covering deep downfield - and he hits his receiver in stride for a perfect touchdown pass. 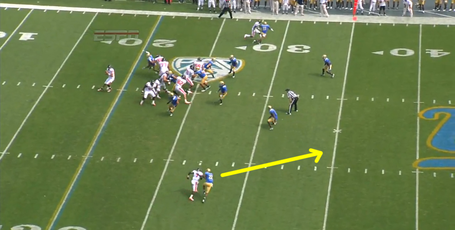 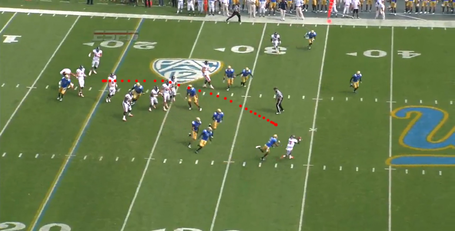 Again, the Bruins were too aggressive, but the Beaver offense made them pay by calling a quick-hitting play at exactly the right time - and trusting their quarterback to make the big play that led them to victory.

Stanford's coaching staff will have to mix up the play-calling quite a bit on Saturday - running the ball up the middle 40 times will not be an effective strategy - and Kevin Hogan must respond when his team needs him. He'll have some great opportunities to make big plays and lead his team to a Pac-12 North title - and if he does, he'll have a chance to take his team to the BCS' version of the Rose Bowl.