The Key to Stopping the High-Powered Beavers: How Brandin Cooks dominates Defenses

Oregon's State's Brandin Cooks is the nation's leading receiver - but can the Cardinal defense can slow him down in Corvallis?

Share All sharing options for: The Key to Stopping the High-Powered Beavers: How Brandin Cooks dominates Defenses

The Beavers boast junior quarterback Sean Mannion, who throws for 427.4 yards per game, and junior wideout Brandin Cooks, who accounts for 168 receiving yards a game. Together, the two combine to create perhaps the most potent offensive duo in America - or at least on the West Coast.

Any opponent who dares to stop Oregon State has to find a way to shut down (or at least slow down) Cooks, thereby cutting the most dangerous head off the hydra that is the electric Beaver offense.

So how do you slow down Brandin Cooks? To be totally honest, I'm not sure.

The bottom line is that this Oregon State offense is extremely well coached and they find ways to get their best playmaker the ball over and over again on a huge variety of plays. Cooks is a pure wideout - he pretty much exclusively lines up split all the way out - but they'll turn to him in any down and distance and they'll use him on sweeps, screens, short routes and deep routes. Cooks, quite simply, does everything well.

So let's go to the tape and see what we can find. The first play here is a jet sweep that Cooks took in for a touchdown against Washington State. He starts at the top of the formation, motions down toward the backfield, and takes off with the ball right after the snap. 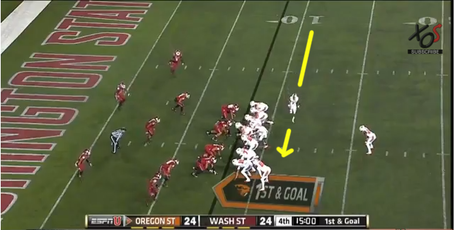 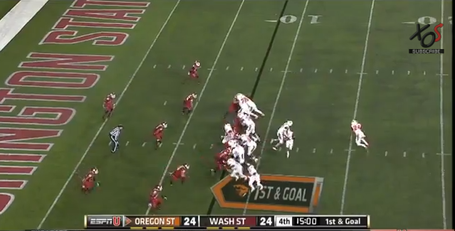 Cooks takes the ball and gets wide enough that the Cougar defenders over-pursue him to the sideline - at which point he darts back to his right and skips into the end zone. 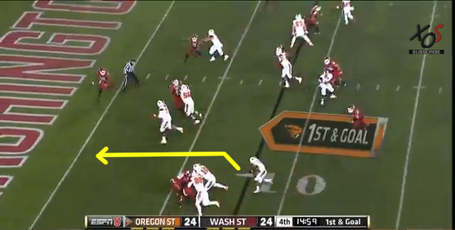 Cooks' speed is extremely impressive, so it's no surprise that the sweep works so well - there's no delay between the snap and getting the ball in his hands. That's the same philosophy behind another play that Cooks ran in for a touchdown against Utah.

This time, Cooks is split out at the top of the formation, and they're going to run a tunnel screen - he catches the ball coming in toward the line of scrimmage, and the linemen release downfield to block for him. Here's Cooks: 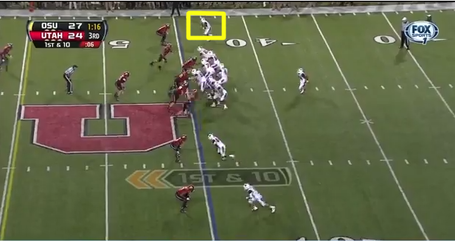 Here you can see the linemen starting to release to the second level, while Cooks comes underneath to take the quick pass. 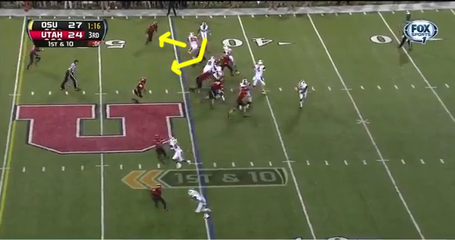 By the time Mannion lets go of the ball, three linemen are downfield - and the tackle has great position on the cornerback who was supposed to be covering Cooks. This play is already set up for success. 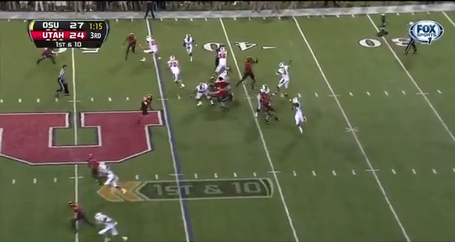 Cooks catches the ball, gets to the sideline and does the rest with his speed. He's a hot knife through the soft butter of the Utah defense. 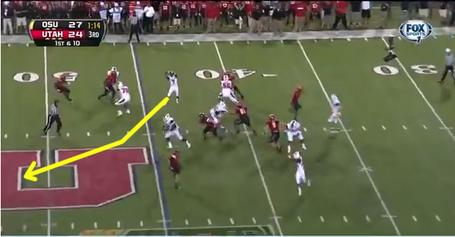 On top of quick-hitting plays that the Beavers use to get him the ball quickly, they also do a good job of scheming to get him open down the field. Take the touchdown pass below against Washington State. Cooks is split out at the bottom of the formation, and both he and the inside receiver are going to run post routes. The tight end on the other side runs a drag across the field. Here's the play, with Cooks highlighted in red: 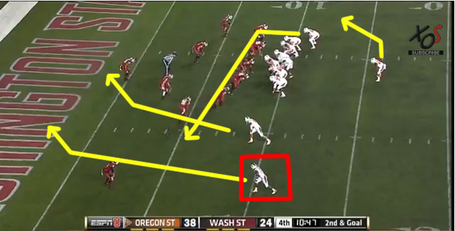 The Beavers sell the play-action to the running back, freezing the linebackers for an instant and giving the receivers a moment to build up steam. 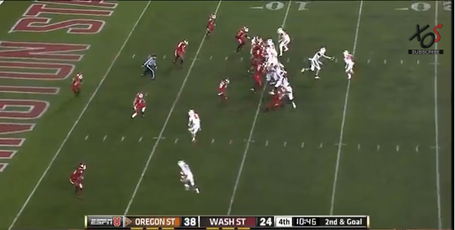 The Wazzu safety begins to drift over to double cover Cooks as he begins to get close to the endzone, but the tight end underneath slips away and finds the open space cleared out by the inside receiver's route. Meanwhile, the slot receiver draws two other defenders away from the middle of the field. 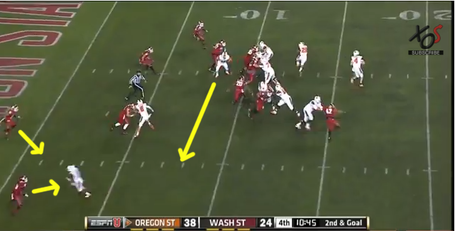 At this point in the play, the inside receiver is now drawing a double team up the middle while the tight end stands completey uncovered underneath. You can't see it on the screen at the moment, but the corner who initially covered Cooks at the snap starts booking it to try and get down onto the tight end. 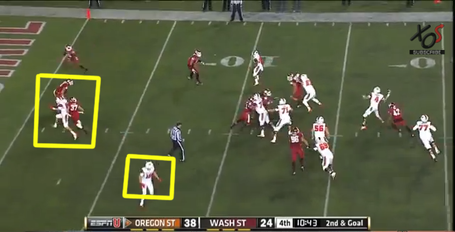 Mannion lets the ball fly for the touchdown, where Cooks has settled between the safety and the corner who were supposed to be double covering him. But because the tight end pulls the corner off the mark (and because the safety totally loses sight of Cooks), the Beavers convert for a surprisingly easy touchdown. It's a well-designed play that stretches the defense all over the field, and Cooks finds the soft spot in the coverage. 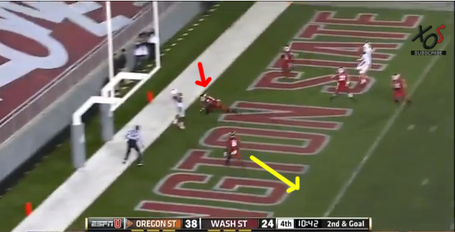 One way or another, the Beavers will find a way to get him the ball - that's for certain. However, the biggest mistake a defense can make is letting him go one-on-one with a defender in single coverage. He's just too fast and too nimble to handle in single coverage. Here's a touchdown against Utah in the fourth quarter, where Cooks is lined up at the top of the screen, singled up by a Utah corner: 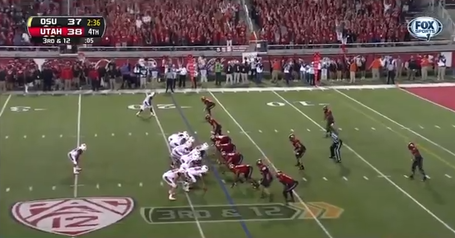 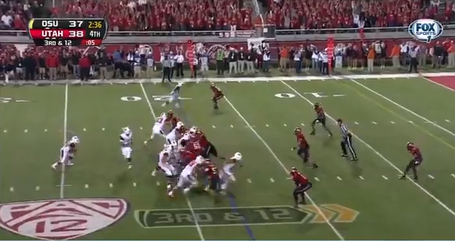 As Cooks releases down the field, he zips past the defender: 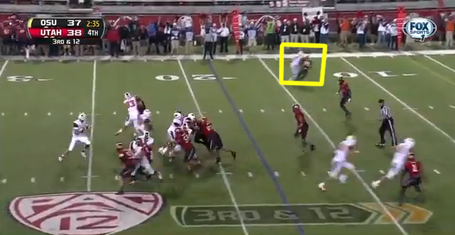 And gets open for a touchdown. This came on 3rd and 12 with 2:34 left in the 4th quarter and Utah clinging to a one-point lead. Don't let him do this do you: 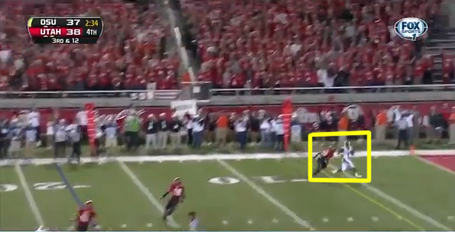 But that's not all: against Washington State, he broke out one of the filthier double moves you'll see all year. Mannion and Cooks fake a quick screen to the bottom of the formation, drawing the cornerback up the field - at which point Cooks runs right past him and into the end zone.

For my money, the guy looks like one of the most impressive non-quarterback playmakers in the country - but the question is if he can do it against Stanford's defense. The Cardinal defensive backs are more talented and better coached than either Washington State or Utah, but if Stanford corner Alex Carter is banged up (he left last week's game with an ankle injury) and not able to handle him at the line of scrimmage, it would mean that Stanford would have to heavily shift its coverage to target Cooks.

So what's the trick to slowing this guy down? First of all, Stanford's safeties and outside linebackers have to be rock-solid in coverage. The safeties can't lose sight of Cooks like Washington State's safety did on the touchdown play above, and the outside linebackers have to have to be able to handle the underneath routes by tight ends so that the safeties can take away the deep shots. Oregon State is going to find ways to get mismatches from time to time, but solid coverage from Trent Murphy and James Vaughters on tight ends will make it easier for Ed Reynolds and Jordan Richards to handle Cooks when he tries to get down the field.

Altogether, the theory is simple. Now if only it were as simple as it sounds.