The Huskies' tight end is a beast built like Rob Gronkowski, but the Cardinal shut him down last year. How will it defend him this year in a critical Pac-12 matchup?

Share All sharing options for: Stopping Austin Seferian-Jenkins: How Stanford will defend the talented tight end

We're living in the golden age of the tight end.

For years, tight ends were guys too slow to play wide receiver and too small to play tackle - so they camped out on the end of the line and dutifully blocked on run plays.

Now, that's not the case. Tight ends in the NFL and college football haven't been used this prolifically since the guys who defined the position - Mike Ditka, John Mackey, Ozzie Newsome, Kellen Winslow - were on the field.

In the NFL, it's all about Tony Gonzalez, Jimmy Graham and Rob Gronkowski. And the next guy that NFL scouts can't wait to get their hands on is Austin Seferian-Jenkins.

Seferian-Jenkins, or ASJ for short, is a 6-foot-6, 276-pound behemoth that looks every bit the part of the new prototypical NFL tight end, and he put it on the field a year ago as well, racking up 69 catches for 852 yards and 7 touchdowns a year ago.

At his best, he's capable of being a Gronk-like mismatch for any defender, so it's imperative that the Cardinal find a way to contain his production down the middle of the field on Saturday. (He's thankfully not as fast as Graham or as physically dominant as Gronk, though.) A year ago, the Cardinal did that with smashing success, holding him to only two catches and 10 receiving yards. So how did the Cardinal do it a year ago - and how will they stop him again on Saturday in a game that will set the tone for Stanford in Pac-12 North play?

First, let's start with how the Huskies like to use ASJ. Head coach Steve Sarkisian and offensive coordinator Eric Kiesau move him all over the field to try and obtain favorable matchups against slower linebackers or smaller defensive backs. In addition to playing in-line with his hand on the ground, he'll also move out wide or in the slot like a wide receiver: 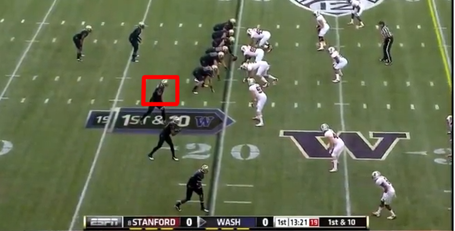 Or as one of three receivers in a trips bunch set that the Huskies use frequently: 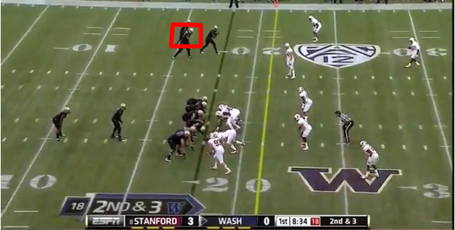 And sometimes they'll even move him into the backfield as a fullback: 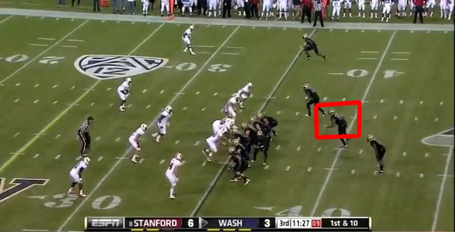 However, no matter where he moved during last year's game, the Cardinal pretty much always kept an outside linebacker close by him at all times, even when he went out wide - notice Shayne Skov lining up at cornerback to cover ASJ. 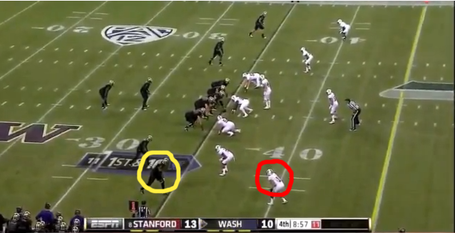 This strategy worked very well to defend him, because Stanford's linebackers are agile enough to cover him - he's not quite fast enough to blaze past linebackers on every down. This worked especially well with AJ Tarpley, the most nimble of Stanford's linebackers, and with Shayne Skov, but Trent Murphy did have a bit of trouble handling him at times. Here's an example - Seferian-Jenkins is lined up at the top of the formation, with Murphy over him. Stanford's two middle linebackers will blitz both A gaps. 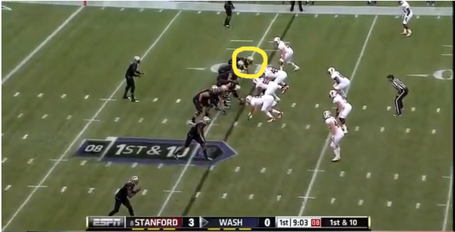 At the snap, ASJ breaks inside of Murphy into the space cleared by the linebackers, catches a lob from Keith Price, and rumbles for a first down. 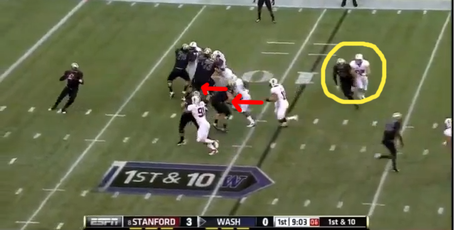 Of course, the Cardinal don't just let him go single-covered the entire rest of the game, especially in critical third downs, where Keith Price loves to look to his biggest target. Later in the game, Seferian-Jenkins lines up in that trips bunch look and runs a short route just past the first down marker. 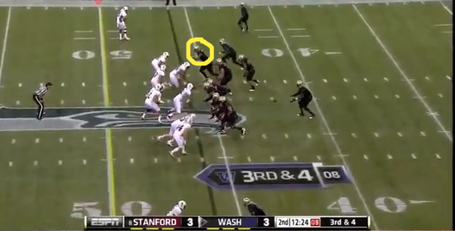 When he gets there, though, the Cardinal linebackers drop into zone coverage and bracket him, hemming him in on both sides and forcing Keith Price to look to a different option. 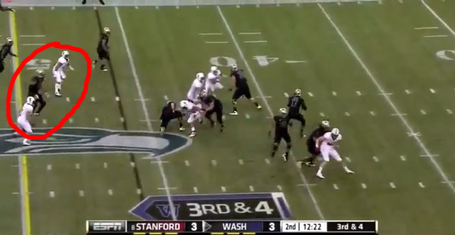 The Cardinal didn't just stop him from catching passes on short down-and-distances though - it also effectively found ways to double- and triple-team ASJ when he tried to make an impact further down the field.

Here, he lines up in the slot, where AJ Tarpley will cover him as he releases downfield. 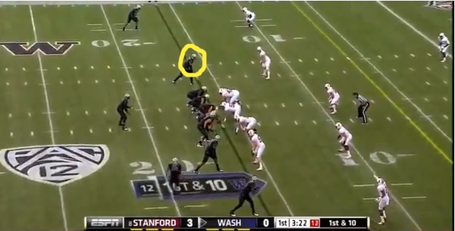 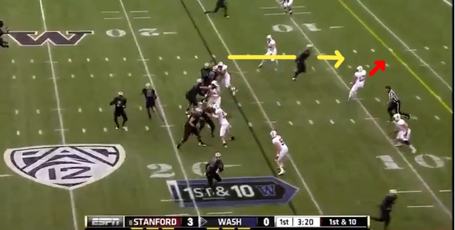 However, as he starts to get past Tarpley, Ed Reynolds and Jordan Richards immediately rush to help, triple-teaming him as he gets into the end zone. The rush and the coverage forces a high throw from Price. 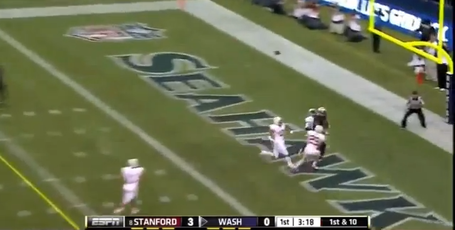 Altogether, Seferian-Jenkins didn't go deep very often against the Cardinal a year ago - the Huskies' o-line didn't give Keith Price a lot of time to throw - but one play in particular showed if they let him get one-on-one against a corner, Stanford will lose that matchup - he's simply too big to be handled by any one corner.

On the very next play after the triple-team in the end zone, ASJ lines up out wide, where he faces single coverage. 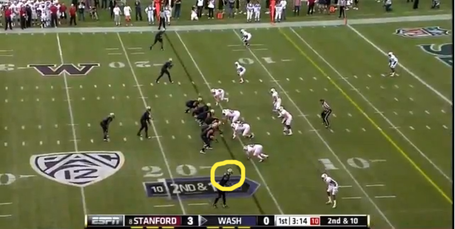 One second into the play, we've switched views to see exactly what a terrified Keith Price is looking at: Stanford linebackers. This play is dead in the water already. 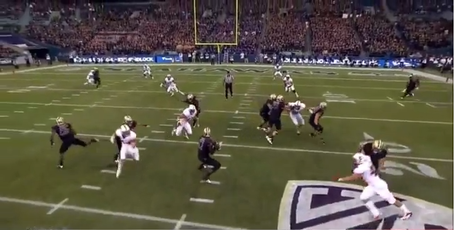 However, as the play continues to roll, take a look down the field. Seferian-Jenkins has broken wide open. If Price had more time to throw, he might have been able to get the ball to ASJ, where he could have easily walked in for a touchdown. 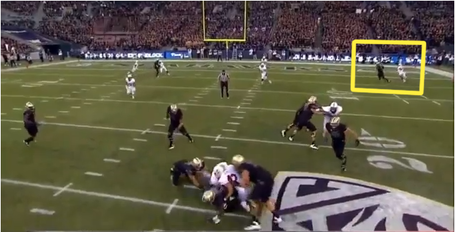 Thankfully for Stanford, its excellent pass rush stopped this play before it even had a chance - but the Washington o-line this year is healthier - and a play like this could possibly go either way this Saturday at Stanford Stadium.

So what's Stanford's trick to stopping Austin Seferian-Jenkins, the man labeled as the next Gronk? The Cardinal always varies its coverage, but keeps linebackers watching him like a hawk and demands that the safeties dive on him every time he goes deep. The Cardinal count on the OLBs to get it done in the short field, but know that he's always close to breaking a big play. So watch out if he gets matchup up one-on-one against a cornerback - because it could be the game-changing play that the Huskies need to upset the Cardinal.