Plugging the Inside and the Outside: How Stanford slowed down the Ducks' run game in 2012

Stanford stifled Oregon's deadly run game in Eugene a year ago - How did the Cardinal do it, and can Stanford do it again?

Share All sharing options for: Plugging the Inside and the Outside: How Stanford slowed down the Ducks' run game in 2012

When is 198 rushing yards in a game a bad thing?

Average it every week, and it'd put you 35th in the NCAA this year - just half a yard behind Miami, and half a yard ahead of Stanford. Those are two of the better running teams in the country... so that seems like good company. So how can 198 rushing yards be a bad thing?

It's a bad thing when you're used to averaging 315 yards a game on the ground.

That's exactly what Stanford's defense did to the Oregon offense a year ago - took the nation's 3rd best running offense and turned it into the nation's 32nd best for just one game - and that was enough for the Cardinal to score a huge upset win.

So what makes Oregon's running game so good - and how did the Cardinal swamp the Ducks' runners in the mud a year ago? Let's go to the tape and find out.

First, it's important to note a few basics of Oregon's run game. The majority of their runs come on two plays: an inside zone and an outside zone, and the quarterback almost always has the option of keeping the ball and running with it himself. (There's also a straight speed option that the Ducks like to run, but it's blocked like the outside zone play.)

So let's first look at a successful inside run - a touchdown run - and see how the Ducks win up front.

On second and goal from the six yard line, Stanford stacks the box with eight guys. Five down linemen, two outside linebackers walked up on the line of scrimmage, and a middle linebacker. Generally, this is not a front you want to run into. 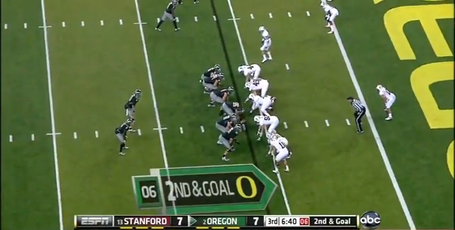 At the snap, the entire line slides and blocks the man to their left. Meanwhile, Shayne Skov steps up and waits on the line, knowing that he's unblocked (Oregon only has six blockers) and if he slow-plays the option, he'll force Marcus Mariota to hand it off to De'Anthony Thomas. Stanford did this throughout the entire game a year ago - asked the outside linebackers who were being read in the read-option to step up slowly and force Mariota to hand the ball off. 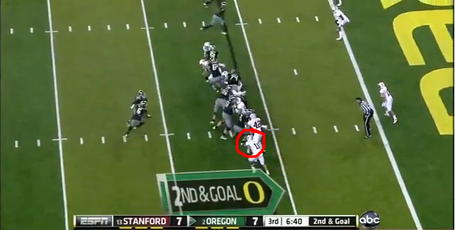 But by leaving Skov unblocked and focusing on getting six blockers on six defenders, the Ducks win easily - the block that opens a running lane is just the center shoving Terrence Stephens to the ground (red arrow). Thomas, who's short and shifty enough to slip through these small holes, easily gets through the line and into open space. 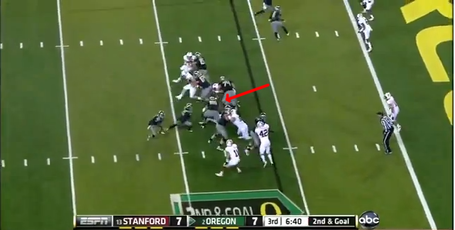 Now it's just Thomas against AJ Tarpley. And that's a one-on-one matchup that Thomas will win every time. He's just that fast. Touchdown. 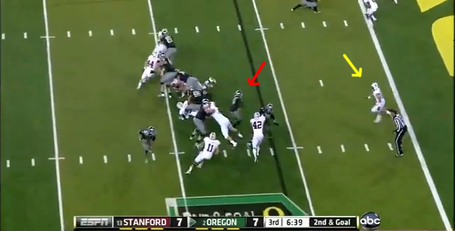 Don't let De'Anthony Thomas do this to you. You know how this ends. These kind of one-on-one opportunities make him tweet things like this:

WISH I HAD MY OWN REALITY SHOW

I NEED SOME CHERRY CHAPSTICK

HOW YOU A STEAK HOUSE AND OUT OF PRIME RIBS

However, this wasn't the case most of the night for the Oregon running backs - they had a lot of trouble running the ball inside. It all starts with a small defensive alignment adjustment up front. Instead of having the two defensive ends in Stanford's 3-4 defense line up in a traditional fashion, Derek Mason pinched those defensive ends in, setting them up over the Ducks' guards. That pinch creates problems for teams who want to run inside.

Here's an example. It's third and one, and the Ducks will try and use the inside run to pick up the first down. Stanford's two middle linebackers are set back from the line, while the two Stanford defensive ends are pinched in. 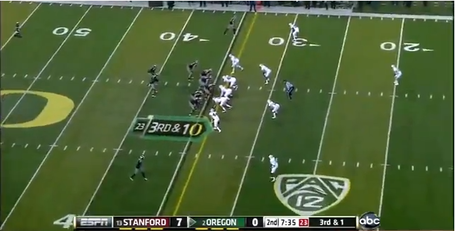 At the snap, the right guard pulls (red arrow) - this play is designed to be run like the famous "power" run play - and the right tackle is supposed to (legally) cut block the backside defensive end. But the DE is just too far inside for the tackle to reach, so he ends up flopping on the turf (yellow arrow). Meanwhile, Henry Anderson basically bear crawls into the backfield to stop the play dead in its tracks. 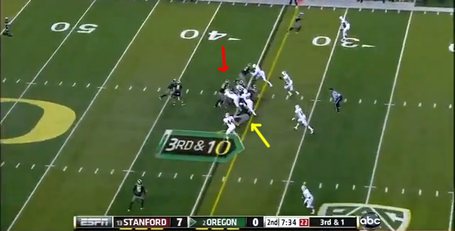 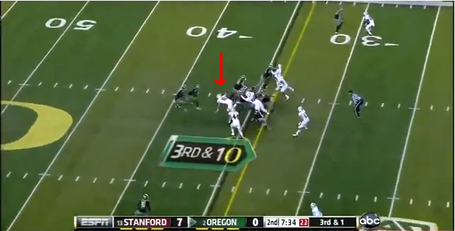 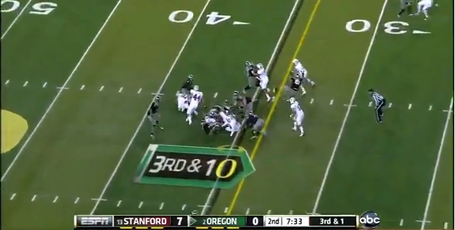 This little change in defensive alignment gave Anderson the chance to make this play and gave the Ducks fits in the interior run game all night. It also kept the Stanford linebackers free to make plays because the Ducks' o-line kept struggling with blocks up front.
So what do you do when you're struggling to run it inside, especially when the defense is set up to stop the inside run? Just run it outside.

Here are two examples of the outside zone run that Oregon uses - two perfect examples of why this run is so deadly.

On the first outside run, the Ducks set up with three receivers to the wide side of the field to help space out the defense a little bit - and to move a linebacker out of the lane they want to run it into. 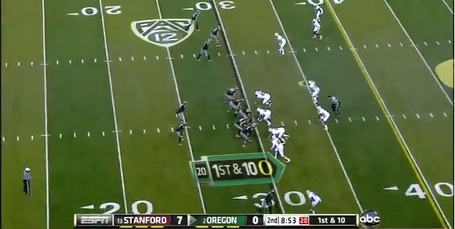 At the snap, notice how every Oregon interior lineman has swamped the defensive line, pushing Terrence Stephens over and Ben Gardner into the backfield, while the left tackle has come up and stonewalled outside linebacker AJ Tarpley. As De'Anthony Thomas starts to turn the corner, there's only one guy who can stop this play - Shayne Skov - and he's not in position to stop Thomas. He's too far inside and not fast enough to close that gap. 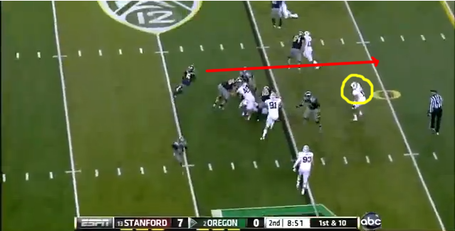 That's a big hole to run through, and it goes for a ten-yard gain. That's an (almost) perfectly blocked, perfectly executed outside run through the hole it was designed to go through. 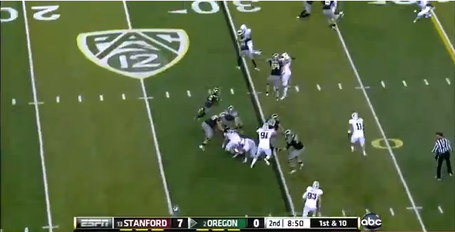 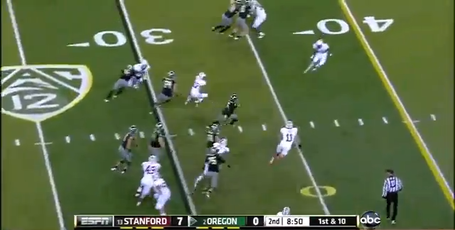 On the very next play, the Ducks run the exact same play - an outside run - but this time they run it to the other side of the field. It's the same basic setup, with Oregon snapping the ball from the hashmark and running it into the wide/open side of the field (they like to do that). 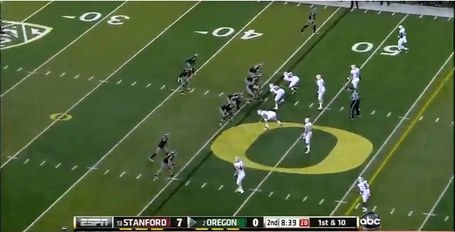 As the play develops, David Parry decides that he's not going to let Thomas get wide once again, so he starts pressing up the field and into the path of the running back. 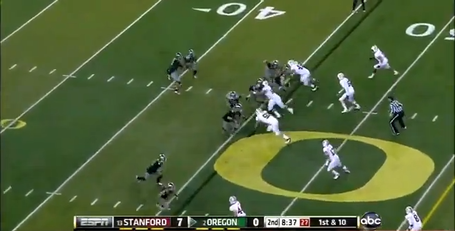 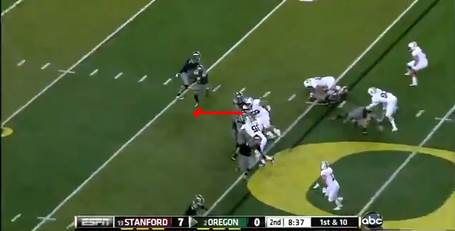 Thomas waits as long as he can - he almost runs into Parry - then cuts it back up the middle for a ten yard gain. 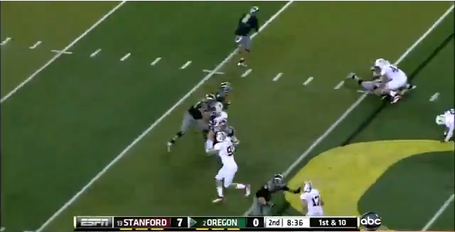 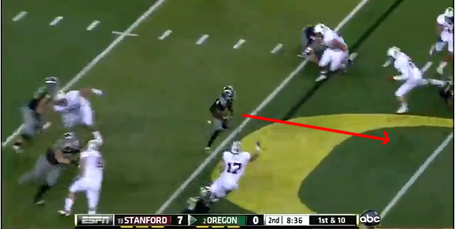 Even though this play didn't go through an outside hole, Oregon's outside runs are designed to have cutback lanes open up if the defense rushes to get outside. Parry pressing up the field gives Thomas an easy decision to cut it back, and he picks up two consecutive 10-yard runs on the same exact play, even though it ends up looking quite different to the naked eye.
So did Stanford stop these outside run? Flawless fundamentals, and making the Ducks run game more predictable. After these two outside runs went for 20 yards, the Stanford defense held the Ducks to just 9 yards on 13 carries outside the tackles.
Here's a textbook play of how to stop the outside zone run. Once again, Oregon is going to run this play into the wide side of the field. 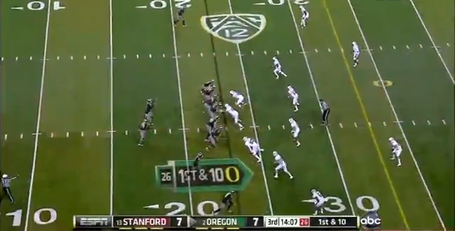 At the snap, the weakside outside linebacker (who's being read on the zone-read) slow-plays the handoff, which once again forces Mariota to hand the ball off. Because everyone knows the ball is going to the running back, that gives all of Stanford's linebackers the time to start to flow to the running back, but they don't rush and over-pursue the action (like Parry did on the last play).
Also notice the Stanford defensive line: they've all flowed toward the action and are holding the Ducks' offensive linemen up like it's a bench press. Nobody gets swamped down inside at the line of scrimmage. Every D-lineman is now able to throw their O-lineman out of the way to get to the running back, no matter which way he goes. 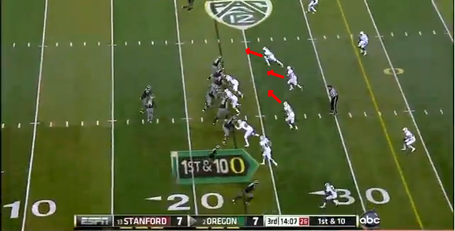 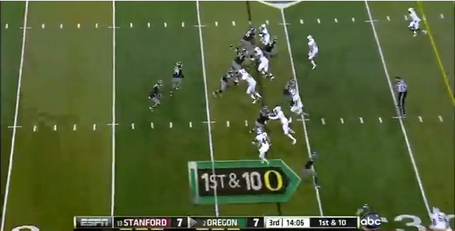 Kenjon Barner is left in no-man's land here. Look at all the white jerseys bearing down upon him. There's no lane to run through where he was supposed to go, but there aren't any cutback lanes either. Nobody has overrun the play, and every defender on the backside is waiting where they're supposed to be. 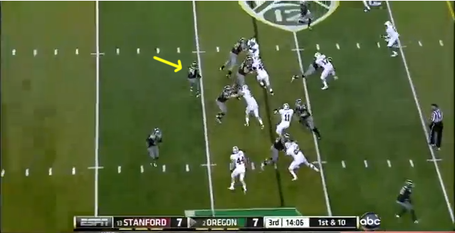 He ends up squeezing forward for a 3-yard gain, but the result is definitely a win for Stanford. This is how you stop Oregon's outside run.

So now that it's a year later and the stakes are just as high, how does Oregon counter the Stanford defense in 2013? I think they'll borrow Texas A&M's offensive style and let Mariota go full Manziel. By using the pass to set up the run, Oregon can get Stanford's defensive backs running backward, and Mariota can just carry it himself. (Or throw. He hasn't thrown a single pick this year). If Mariota can handle the rock all game long, he might take a few extra hits - but he's fresh and he's big enough to handle a few shots.

But for now, Stanford's playbook to stopping Oregon's prolific run game remains the same as last year: Be aware of where you are on the field because they're probably going to run it to the wide side. Plug the middle with your defensive ends. Have the outside linebacker force Mariota to hand it off. Play with flawless technique on the front side. And don't allow cutback lanes. Got it?

Now we'll see if the Cardinal can do it again - or if these Ducks have some serious tricks up their sleeves.