Just a year ago, so much seemed in flux.

Who was going to be the quarterback? Was David Shaw ready for life after Luck? How will this offensive line replace DeCastro and Martin?

And a year later, so little seems in flux. A Rose Bowl win and an incumbent starting quarterback will do that for you.

The White team (the defense) pulled off the 40-34 win over the Cardinal team (the offense) on Saturday in Stanford Stadium, but there were positives all around Stanford's Spring Game this year. While there's only so much anybody can learn from a scrimmage, it's time to make some Spring Statments as the Cardinal breaks camp until fall, and sort out who proved themselves on Saturday.

1. The Wide Receivers stepped up. It looked like David Shaw wanted to directly challenge his receivers to make big plays - and Shaw confessed that he wanted the offense to be more balanced this season - so it was very encouraging to watch player after player make an impact. Sure, most of the receptions were short throws, but the fact that five or six guys all made noise was comforting.

Michael Rector scored a 44-yard touchdown when he made an excellent adjustment to an underthrown pass, Ty Montgomery got better as the scrimmage went along, and even Jordan Pratt looked like a deadly outside threat for a while. We know that we shouldn't be concerned with the defensive backs, so this should give both Kevin Hogan and Cardinal fans big confidence in the offense.

2. Davis Dudchock is the next tight end up. The void at tight end is a big one, and it's more than likely that no one player will be able to fill it. That said, Davis Dudchock did an excellent job of being a real receiving threat. He's not the fastest player off the line of scrimmage, but he consistently found holes in the defense and was able to make five move-the-sticks catches and score a touchdown - the essential jobs of any Stanford tight end.

He stood out in stark contrast to Luke Kaumatule, who let a couple passes bounce straight off his shoulder pads. While Kaumatule's hands are obviously still a work in progress, Dudchock looks like a guy who will at least be able to replace some of Ertz's production.

3. Lee Ward and Ryan Hewitt are road-grading machines. These two guys will be the straw that stirs the drink for the Stanford run game this season. The offensive line, as usual, looked (mostly) great, but I was most impressed with Ward's blocking. On one play in particular, he straight-up stonewalled Trent Murphy to open up a big hole for Ricky Seale. With Hewitt and Ward clearing the path for this big group of runners, the transition to a totally new backfield should be much easier. 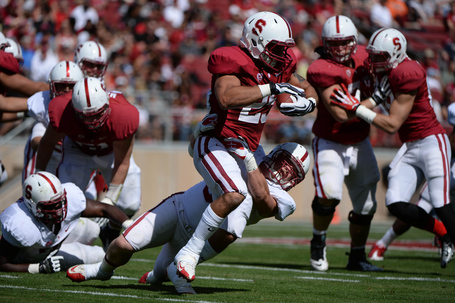 1. The defensive line was the best unit on the field. At one point, I had to do a double-take to figure out who number 7 on the defensive line was. And that's because I hadn't realized that Aziz Shittu was so enormous. He worked with the second team all day, but he more than held his own again the first-team O-line, beating Andrus Peat across his face on the Hogan-Rector touchdown connection, and making a slick play to snuff out a screen pass to Barry Sanders.

On top of that, fellow second-team lineman Jordan Watkins (a 6-foot-7, 271-pound sophomore) single-handedly ruined a shovel pass from Hogan to Tyler Gaffney. Watkins recognized the play, charged upfield and put a huge mitt on Gaffney to stop him in his tracks, and Hogan's pass fell incomplete.

It was easily one of the most interesting plays of the day, and I have to imagine the Stanford coaching staff is absolutely loving the depth and talent they have along the defensive line. The D-linemen were my stars of the spring game.

2. Usua Amanam is the Stanford defense's x-factor. Last year, I said that Amanam could be the Cardinal's version of Tyrann Mathieu if used correctly, and while he's no Honey Badger just yet (and nobody probably ever will be), he played lockdown pass defense and looked fast off the edge on his blitzes. He and Ed Reynolds are the guys that give me great confidence in Stanford's nickel and dime packages, and I am expecting big things this season from the guy who sealed the Rose Bowl win.

3. The linebackers might be the best in the country. This unit looked like it isn't going to miss a beat without Chase Thomas. James Vaughters was fast and instinctive, AJ Tarpley looked ready to be an every down player and Jarek Lancaster was excellent as one of the first players rotating in.

The best player, of course, was Shayne Skov, who made several tackles and broke up a pass, but did look like he might have tweaked his knee after an offensive lineman rolled over his left leg. Skov didn't play after taking a hard fall, but this group is, without a doubt, the most complete defensive sub-unit on the team. 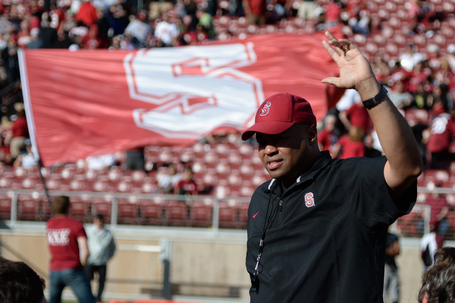 - Kevin Hogan is ready to take the next step. He looked really crisp and efficient with the football all day. His passes were sharp and on target, and while I wish he wouldn't hold the ball so far away from himself (his throwing motion sometimes looks like a fumble waiting to happen), I think he'll do great things in 2013.

- The center position is still up for grabs. Let's get this out of the way: not one of the three centers won the day on Saturday. Botched snaps and missed blocks showed that nobody is quite ready to take over for Sam Schwartzstein. For my money, Kevin Danser was the best of the three (Khalil Wilkes and Conor McFadden were his competitors), but I don't think anybody's ready to become the starter yet.

- Who will return punts? This was the biggest question I had after watching the game. A different player ran out to catch punts every single time, including Barry Sanders, Ty Montgomery, Tyler Gaffney and a host of others. Drew Terrell was such a huge asset as a punt returner last year, and it's imperative that a clear-cut favorite to return punts emerges this fall.

- Barry Sanders will be a great back for Stanford someday - but not yet. He was shifty and had great feet, but he didn't do a great job of reading his blocks when he got the chance to run between the tackles. He overran his fullback's block several times, but he should now have some good plays on tape to watch and learn from.

- Tyler Gaffney and Anthony Wilkerson will pace the Cardinal, but the backfield isn't clear yet. Stanford ran the ball surprisingly few times on Saturday (one ratio I saw said it was 58 passes to just 18 runs), but Wilkerson and Gaffney both looked willing and able to carry the load for Stanford this season. I'm not worried about their reliability one bit. However, Ricky Seale and Jackson Cummings both had nice days and Kelsey Young didn't participate due to hamstring issue, so there's still plenty of roles to be settled and carries to be had this fall.

- Kyle Olugbode shows that the d-backs won't miss a beat. He more than once came up from his spot to stop the run, and amassed six tackles on Saturday. While Ed Reynolds and Jordan Richards are the incumbent starters, Olugbode didn't look like any drop-off even though he was on the second team. Again, more evidence of good depth for the Cardinal.