A flip wedge. A putt right in the back of the hole. And a spot next to Tiger Woods in the record book.

Three playoff holes were needed to decide the national champion at Prairie Dunes Country Club in Kansas, but Cameron Wilson came out on top by burying a birdie on the 17th to defeat Georgia Tech's Ollie Scheneiderjans.

Wilson was on a roll even before the final round, ripping Prairie Dunes apart en route to a second-round 63, but he made it interesting at the end. Wilson came into the 72nd hole with a one-shot lead, but wiped both his tee shot and his approach, then couldn't get up and down to send it to extra holes.

But it didn't matter in the end - on his third chance to win a national title, he knocked it in. Wilson now joins Tiger (1994) and Sandy Tatum (1942) as the only players to win individual national titles as a Cardinal.

Ben Hogan award winner Patrick Rodgers had to have been the favorite coming into the week - he had won 5 of his last 6 tournaments, including the Pac-12 title, but four bogeys in six holes on his final nine - including three bogeys in a row - derailed Rodgers in his last tournament before turning professional.

The Cardinal team now begins the match play portion of the tournament, where they have to be the odds-on favorite to win. Stanford absolutely wrecked the field in the stroke play portion of the event, and now starts its chase for a team title against #8 Illinois.

The Illini are a gritty team that has produced two of the last five individual national champions, so they might be one of the scarier teams in the field to face in match play, but the top three of David Boote (who fired a final round 65), Rodgers, and newly crowned national champ Wilson is a squad I'd count on. 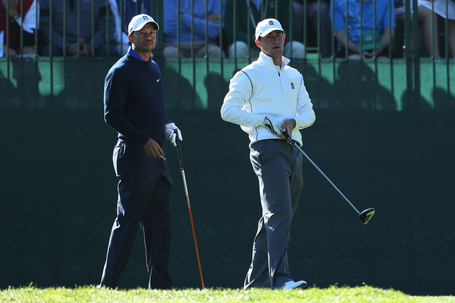