Share All sharing options for: ROT's Favorite Plays of 2013: Criss Cross will make ya...

In football, there's nothing quite as useful as sleight of hand.

Even if you're giving up 500 pounds across the offensive line or you're a half second slower on your 40, a little trickery in the right place at the right time can change the game. Just ask Boise State. They made a living off it for years.

Stanford doesn't need to use Ocean's 11-level trickery to beat teams. Instead, just a little dose of the unexpected here and there is enough to keep opponents off the mark. After getting power football smashed into your face for 25 minutes, it's time to mix it up.

One example of Stanford using an ounce of trickery to pounce on an opponent came just minutes into the 2013 season, on the Cardinal's first drive of the year against San Jose State. After three straight run plays to Tyler Gaffney, the Cardinal approach a 1st and 10 at the Spartan 40.

Stanford lines up in an I-formation with two tight ends and Devon Cajuste split wide to the left. He quickly comes in motion across the formation to shift the strength to the right side. 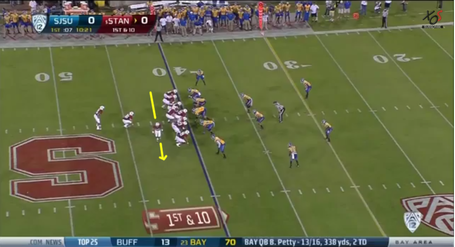 The SJSU defense is set up in an under front, with the linebackers shifted toward the right (strong) side. Behind it, they're running some variant of a cover-3 (perhaps a cover-6). With all this extra bulk on the line and the two running backs in the backfield, Stanford's set up in a run formation, but they're going with a deep play action pass instead. Here's the way the play's going to look. 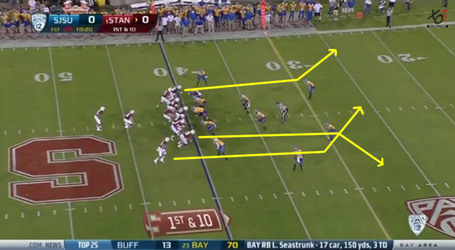 Both tight ends will run deep corner routes, while Cajuste will run a post to the center of the field that crosses right under the tight end's route. Hopefully, this cross on the right side of the field will confuse the deep safety - the guy Kevin Hogan will be reading when he hits the top of his drop.

In the next two frames, Hogan carries out the play-action to Gaffney, while the defense spots the tight ends going deep and begins to drop into zone coverage. The strong side corner backpedals a long way to handle Cajuste going vertical, while the linebackers all drop except for the backside middle linebacker, who steps up a few yards, perhaps fooled by the play fake. 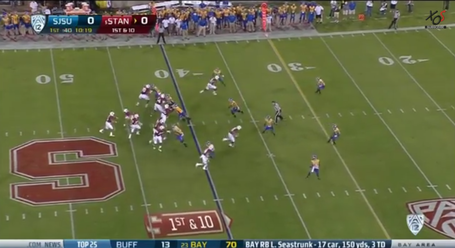 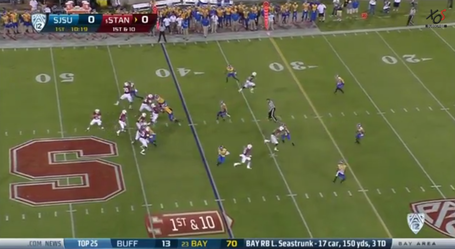 Hogan now reaches the 4th step of his drop and spots the safety moving to his left (Hogan's right). The safety has sold out that he's going toward the sideline. Now, all Hogan is waiting on is for the receivers to cross. 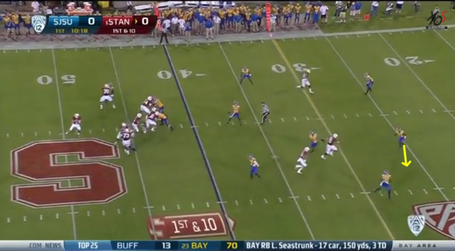 And here they go. 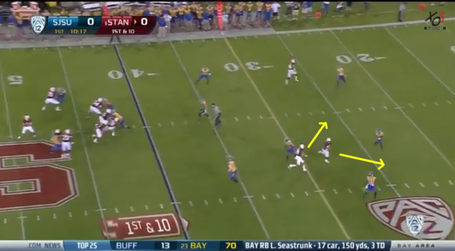 The safety on the backside is occupied with the tight end running the corner route on the far side, so he's also out of the picture as far as Hogan is concerned. Now, Hogan sees the middle of the field open up for Cajuste and lets it fly. The strong side safety stops and tries to change direction, but he's got no chance of stopping the catch. 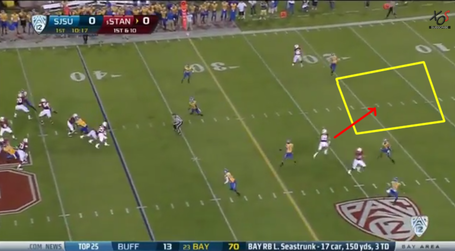 Look how wide open the middle of the field is when the ball is halfway through its flight. 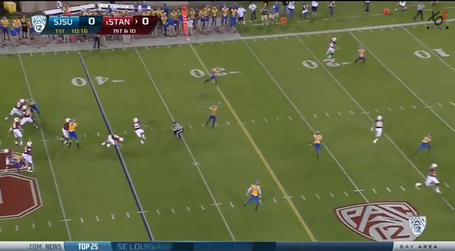 Cajuste catches the ball at about the 15 yard line and drags the hapless defender into the end zone with him. 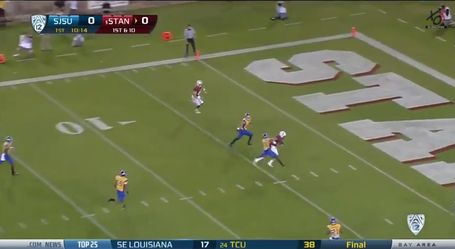 The fantastic thing about this play is that it's not all that complicated, but it's effective against almost any type of coverage if there's enough protection for the quarterback. Run this play against man coverage and you might get two defenders to run into one another. Run it against cover-2 and you might see a wide open middle of the field like in this play.

Watch the play in action:

If Stanford's tight ends in 2014 are as good at blocking as they are at catching passes, expect the Cardinal to go back to this play (or one very similar) more than once. A bruising run game followed up by this kind of execution in the play-action is a hard thing to stop.

And when you've got players like Stanford does, a small trick is all you need to be effective - or even deadly.