Starting and Finishing: How Stanford’s Defense Can Be Even Better in 2014

The Cardinal had the 10th best defense in college football last season - so where can it be improved?

Share All sharing options for: Starting and Finishing: How Stanford’s Defense Can Be Even Better in 2014

With former defensive coordinator Derek Mason leaving the Farm to become the head coach at Vanderbilt, the question that has come to define the program has surfaced yet again: "How will Stanford replace him?"

Over the last five years, the annual barrage of this question has begun to sound like white noise, but, in the case of Mason, it might be a fair one. He was undoubtedly a key cog in the Cardinal machine and - since head coach David Shaw doesn't touch the defensive play-calling - he had the control over one of the top units in all of college football.

Mason was also revered for solving Stanford's "Oregon Problem," leading the Cardinal defense to a pair of performances that stunned the nation, holding the Ducks' offense to 14 points in 2012 and 13 points in 2013.

Long-time Cardinal assistant Lance Anderson, one of three coaches remaining from Jim Harbaugh's original 2007 staff, takes over as the new czar of the defense. With the losses of several crucial playmakers from 2013, including Shayne Skov, Trent Murphy, Ben Gardner and Ed Reynolds, many have wondered if the Stanford defense will be able to even come close to its performance from last season. However, by all accounts, Anderson's defense has dominated in training camp, which leads me to ask a different question: Where can Stanford's defense improve this season?

By almost any estimation, the defense was pretty darn good in 2013 and left little room for major improvement, but two areas stand out as slightly troubling: how the defense started games and how it finished them.

To look the defense's performance on it's opening drives, I made a quick table to complement Jack Blanchat's examination of the Stanford offense's opening drives back in June.  Here are the results:

Stanford's relative struggles on opening drives were well-documented last season. Mason and several players mentioned that opposing teams tended to stray away from what they had shown on film. As a result, the Card gave up close to 42 yards per possession on opening drives.

Opponents respected the Stanford defense and adjusted accordingly. According to the website teamrankings.com, the Stanford defense faced a greater percentage of pass plays than any other team in the FBS, with 58% of all snaps as pass attempts. Obviously, this metric is heavily dependent on context; a great team like Stanford will likely jump out to a lead and force teams to play catch-up by airing it out. Playing teams like Washington State and Cal also helped that number. Nevertheless, one has to think that the 2.9 yards allowed per carry forced teams to rethink the game plan.

Almost all of the teams that had success against Stanford early picked up multiple first downs along the way. Mason relied heavily on a "bend but don't break" defensive philosophy last season, and the plan was very effective. Stanford rarely gave up the home-run play and allowed only 10.3 yards per completed pass, good for fifth in the nation. "Bend but don't break" starts to fall apart when teams are able to sustain drives and several opponents were able to do just that on their opening possessions.

This problem will likely continue to test the Cardinal in 2014. While the 2013 squad was caught off guard at times early in the game, Mason showed a tremendous gift for in-game adjustments. It remains to be seen if Anderson can respond as well, or if Stanford can perhaps tighten things up and shut the door on the opposition's first drive.

On the other hand, the Cardinal also gave up most of their points in the fourth quarter. The furious rally by Arizona State in the first meeting and Oregon's last-ditch effort are two notable instances where Stanford played nearly airtight defense for the first three quarters before opening up the floodgates in the fourth. This trend is particularly surprising when considering that the Card were at their best in the fourth quarter a year prior in 2012, with the same defensive coordinator and many of the same players. 14 games is not a fantastic sample size by any means, but the results are still fascinating.

Using the same database as before, we can chart average points allowed per quarter: 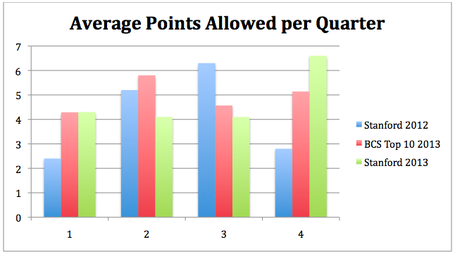 Understanding the reason behind this discrepancy is tricky. Stanford didn't have to withstand any more opponents' possessions in the fourth quarter; in fact, opposing teams often had fewer possessions in the final fifteen minutes thanks in large part to the Cardinal's clock-chewing run game.

My best guess is that Stanford, typically playing with a lead, played to prevent the big play in the fourth quarter, but teams found ways to sustain drives. The result could also be an aberration given the small sample size.

Nevertheless, there are places for the Stanford defense to improve upon an incredible 2013 season. Yes, losing a ton of talent and leadership as well as a fantastic coach will hurt a lot, but don't discount the "next-man-up" philosophy within the program. Stanford's defense could easily take a step back this season, but they could return ready to go and improve in two key areas of the game: starting and finishing strong.