Stanford vs. Washington: Best and Worst

Share All sharing options for: Stanford vs. Washington: Best and Worst

Here's a look at the best and worst from Saturday's 65-21 win against Washington.

Best Offensive Line: David DeCastro, Jonathan Martin and the other members of Stanford's Tunnel Workers Union were incredible, paving the way for a school record 446 rushing yards. The running game was so effective that Andrew Luck spent most of the night handing the ball off to Stepfan Taylor (138 yards), Tyler Gaffney (117 yards), or Anthony Wilkerson (93 yards), and then jogging 10-20 yards before doing it again.

Worst Kicker, Volume VII: It was by no means a chip shot, but Washington's Erik Folk missed his only field goal attempt of the game from 46 yards. Of course he did.

Best BCS Busters: Texas Tech and Michigan State did wonders for Stanford's BCS title game hopes with upsets of Oklahoma and Wisconsin, respectively. Stanford moved up to 6th in the BCS standings, 4th in the AP poll, and third in the Coaches' Poll. 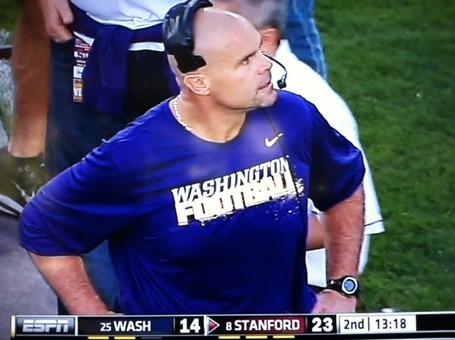 Worst Mood: Maligned Washington defensive coordinator Nick Holt, whose troops were shredded to the tune of 615 total yards, wasn't a happy camper. Imagine how mad he must've been 42 points later.

Best Shayne Skov Impersonation: Jarek Lancaster was an absolute beast, registering a team-high 10 tackles, a sack, and a pass breakup. Lancaster, who has started in place of Skov since the All-America candidate went down with a season-ending knee injury against Arizona, sported the Ultimate Warrior-like eye black look that Skov favored and was instrumental in holding the Huskies' offense to 16 fewer points than they were averaging this season.

Worst Penalty: Chase Thomas was called for a questionable helmet-to-helmet hit on Keith Price late in the game, the only blemish during an otherwise stellar night for the junior linebacker. Thomas finished with six tackles, including 2.5 for a loss, two of which came on back-to-back plays in the third quarter. 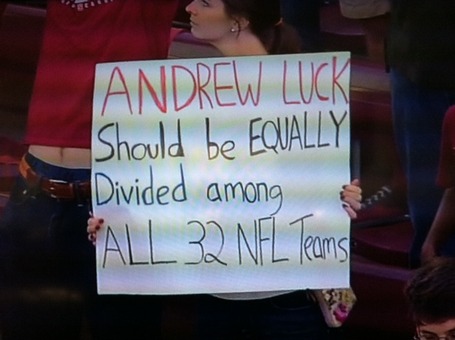 Worst Lack of Replays: Sean McDonough and Matt Millen were tolerable for most of the night, but ESPN's lack of replays on a couple of occasions was annoying. It would've been nice to have seen what Jordan Williamson did to draw an unsportsmanlike conduct penalty on a second quarter kickoff.

Best Place for a Joke: Millen raved about former Stanford greats Jim Plunkett and John Elway and said that if he could pick one player in NFL history to build a franchise around, it would be Elway. McDonough somehow resisted the urge to ask Millen if he was sure he wouldn't pick a wide receiver. Like, say, Charles Rogers.

Best Home Run Hitter: When talking about Tyler Gaffney, whose 117 yards came on only 9 carries, McDonough said that the Stanford coaches refer to him as the Cardinal's home run threat. It would've been a good time to mention that Gaffney also stars for the Stanford baseball team.

Worst Tackling: Stanford missed a lot of tackles in the first half, particularly in the secondary, where Devon Carrington started in place of the injured Delano Howell. UW running back Chris Polk was the biggest beneficiary, gashing the Cardinal for first half touchdown runs of 46 and 61 yards.

Best Second Half Adjustment: Polk had 143 yards at halftime. He finished with 144.

Worst Hands: Washington's Jermaine Kearse finished with four catches for 52 yards but dropped at least two perfectly thrown passes, including one that would've gone for a touchdown. Huskies cornerback Desmond Trufant dropped an interception in the end zone. 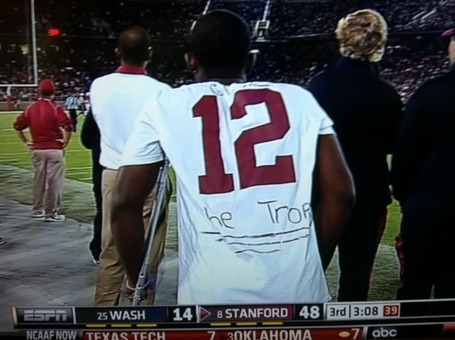 Best Heisman Campaign: Freshman safety Wayne Lyons, who remains inactive with a foot injury and could be redshirted, was walking with crutches on the Stanford sideline wearing an Andrew Luck jersey T-shirt. Lyons took a Sharpie to the back: "Give 12 the Trophy."

Worst Slogan: When discussing the Suck for Luck phenomenon, McDonough referred to it as the Stink for Luck. It just doesn't have the same ring to it, does it? 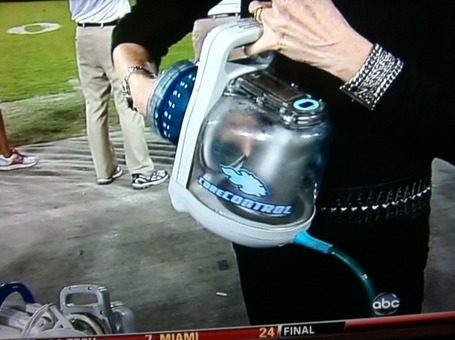 Best Innovation: ESPN did a short segment on the RTX technology developed by Stanford scientists that the Cardinal uses to help prevent cramping.

Best Pick Six: Michael Thomas returned a Price interception for a touchdown at the end of the first half. Barry Browning had an interception later in the game, bringing Stanford's season total to three.

Best Streak: Stanford gave up its first points in the first quarter and saw its streak of 12 straight games holding an opponent under 20 points come to an end, but the Cardinal won its 10th straight game by at least 25 points. That's the longest streak since 1936.