Anybody who's watched Kulabafi do his thing over the last couple of years already knows that Stepfan Taylor is going to be an excellent pro, but Taylor is earning effusive praise from NFL scouts this week at the Senior Bowl.

Chase Thomas is also earning some interest from lots of NFL teams down at the Senior Bowl - including the Texans, Chiefs, Cowboys, Jaguars, Dolphins, Falcons and Buccaneers. (Apparently NFL teams in the southeast really like Chase Thomas.)

Tom Brady won't be playing in the Pro Bowl, but Andrew Luck will be. Not a bad way to spend your first season - win 11 games, go to the playoffs, and get a free trip to Hawaii.

ESPN's Pac-12 blog has a season review for the Stanford football team, and as you might imagine, the reviews are pretty positive.

The Indianapolis Colts are lucky to have to many former Cardinal players on their team, and now they can count offensive coordinator Pep Hamilton in the fold as well. The Colts' official website has a little story where Coby Fleener talks about what he expects from the Indy offense next season. However, the copy editors at the Colts' site obviously aren't familiar with the fact that "Cardinal" is singular. See the screengrab: 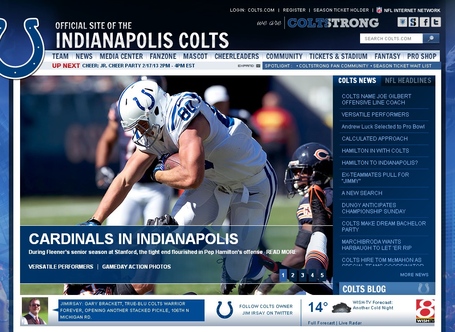 Not Cardinals, guys. Cardinal. The color, not the bird.

You know that John and Jim Harbaugh are coaching against one another and the Super Bowl (did you know that they're brothers?) but did you know that they moonlighted as recruiters for Western Kentucky? Both were happy to make phone calls to help out their dad, Jack Harbaugh - even though Jim was a starting quarterback in the NFL and John was an assistant coach at Cincinnati. Dan Wetzel has the column right here. Includes a cameo from former Stanford running backs coach Willie Taggart.

Stanford's men's volleyball team had a big win over No. 4 UCLA last night.