Three former Cardinal players were drafted this year, and many more signed free agent contracts - so which players fit the best with their new teams?

Share All sharing options for: Grading how former Stanford players fit with their new NFL teams

The draft is over. Now the real work begins.

With the 2013 NFL draft already collecting dust and former Stanford players breaking in their new team colors, it's a good time to dig through the rosters and figure out just how well these ex-Cardinal athletes fit in with their new teams. Using letter grades, let's see which players are in the best spots now that they've moved on from the Farm:

Zach Ertz, Eagles: B. I was genuinely shocked when the Eagles picked Ertz because I didn't think Chip Kelly would be in the market for a shiny new tight end. But after the Eagles' draft, I'm convinced that Kelly's up to something that I don't understand yet. Even more surprising than the Eagles picking Ertz was them picking Matt Barkley, a quarterback who doesn't fit into the style of offense that Kelly played at Oregon at all. While Barkley wasn't picked to take over the team right away, it still threw a kink into what people thought Kelly was going to do and what he's actually doing. Tangent aside, I think this offense might afford a lot of opportunities for a solid, consistent pass-catcher like Ertz to thrive. I'll be interested to see how Ertz exactly fits in to the Eagles' O this year, but overall, I think Ertz is in a good place to be a multifaceted threat in a dynamic offense, and don't be surprised if he finishes as one of Philly's leaders in receptions this season.

Levine Toilolo, Falcons: B+. The big guy is still a work in progress, but he might be in the perfect place for a young tight end. He won't be tasked with starting right away, but he has the opportunity to learn from Tony Gonzalez and become the Falcons' next mainstay at tight end. For a fourth round pick, that's all you can ever hope for. The grade is a little lower because I think he'll only see limited playing time this year (Matt Ryan's other receiving options are pretty good ones), but Toilolo might thrive in ATL in two or three years. 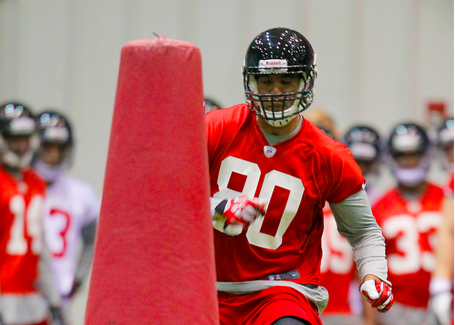 Stepfan Taylor, Cardinals: A. It's always nice when you don't have to change your wardrobe, although he does look dapper with an Angry Bird on his helmet. On top of that, Stepfan (and Kulabafi) is a guy who found a perfect spot in the NFL. The Cardinals averaged 75 yards a game on the ground last season, and they did it with a host of one-tool running backs. Because Stepfan can run and block and catch passes (and because new head coach Bruce Arians isn't afraid to use young runners), I expect Taylor to get major, major playing time in the Arizona backfield this year.

Even Football Outsiders' Ben Muth, a former Stanford tackle and Arizona Cardinals fan, even went so far that he declared Stepfan will be the starter in due time:

Stepfan Taylor will be Arizona's starting running back by the end of the year. 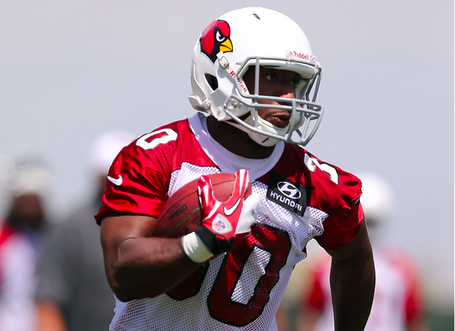 Chase Thomas, Saints: A+. While I was immensely peeved that Thomas wasn't drafted (I have no idea what NFL personnel staffs were thinking), I don't think he could have landed in a better spot for him when all the dust was settled. The Saints had one of the worst defenses in NFL history last season, so they were in desperate need of depth to help them rise from the cellar. Finding an undrafted gem who fits perfectly into their 3-4 will certainly help them do that. While Thomas may not be an eye-popping athlete like Jarvis Jones, I'm willing to bet that he's a key player in the Saints' rotation of linebackers this season, and may even earn a few starts if things go well. And if he decides to flip the bird to all the teams that didn't draft him, I wouldn't begrudge him that either.

Terrence Brown, Bengals: B-. Brown came out early but wasn't drafted (sigh) but he still found a good landing spot with the Cincinnati Bengals. I don't give Brown a super high grade because I'm unclear on what they're trying to do with their defensive backfield at the moment, and they have an odd mix of vets and rookies. The Bengals have a lot of corners competing for spots right now, and while 2012 first-round pick Dre Kirkpatrick is assured of a job, I'm not sure who else is on their roster. That said, Brown could and should outplay some of the guys competing for jobs, including former Auburn running back Onterio McCalebb, who has curiously been converted to corner. I think Brown should be able to stick on the practice squad for a while, and it's probably not a big stretch to say that he might play this season if/when Terence Newman gets hurt or if/when Adam Jones decides to go back to being Pacman.

Alex Debniak, 49ers: A. Debniak, the only Stanford player staying in the Bay Area out of this draft class, not only joins his former coach but also finds himself with an awesome opportunity. Debniak played linebacker in college and will switch to fullback in the NFL, and that position switch is why I give him an A here. Debniak also played running back in his earlier days at Stanford, and I think him returning to Harbaugh's offense as a Bruce Miller/Delanie Walker type is a perfect fit. He doesn't need to be a great runner, he doesn't need to be a great pass catcher, but he is able to do both of those things as well as bring some nastiness to his blocks, and I think there's a good chance that he could make this team as a fullback. Jim Harbaugh had to be pleased that he could sign an insanely great athlete like Debniak and give him a shot to make his team.

Terrence Stephens, Bengals: C. Stephens just recently signed a contract with the Bengals after tryouts in Cincy and with the Jaguars (if only he had tried out for the Panthers and Lions as well...). I'm glad Stephens will get the chance to try and show his skills at the pro level, because despite being undersized, he's a smart, versatile and strong d-lineman who can stick in the league for a while. That said, I don't know if the best place for him to go to is Cincinnati. The Bengals have a ferocious defensive line, including draft star Margus Hunt and one of the NFL's best players in Geno Atkins, so Stephens will probably be battling for a practice squad spot. But if he's able to get some good stuff on tape in preseason and stick on the Bengals, another team could swoop in and sign him, just like the Colts did last year when they signed Delano Howell away from the Bills' practice squad.

Players who are still looking to find a fit:

Drew Terrell: He attended the Chiefs' rookie camp last weekend in Kansas City but wasn't offered a contract. That said, getting in front of Andy Reid - the NFL's longest-tenured head coach when you include his time with the Eagles - is never a bad thing. And down the road, the Chiefs might end up being a good fit for Terrell, with Reid's desire to throw the ball and with their need for receivers who can throw blocks for Jamaal Charles and others. Altogether, Terrell is a bit of a long shot to make a team, but the fact that he earned an invite to the camp shows that NFL teams are aware of his body of work and will give him a chance.

Daniel Zychlinski: Big Z went to the 49ers rookie camp last weekend, but naturally wasn't offered a contract. The market for punters isn't a big one, so it's to be expected that Zychlinski wasn't signed, but a tryout is never a waste of time. I have a feeling that Zychlinski will wind up in some team's training camp as a backup to a really good punter, so keep an eye on where he lands. It usually takes a while for punters to break into the league, but good ones can stick around for decades.