Share All sharing options for: ROT's Favorite Plays of 2013: Fooling the Fighting Irish

Pull the right card at the right time, you get a big payout. Pull the wrong card, and you're paying up.

But one of the most important elements of play-calling - and perhaps the factor that distinguishes the best play-callers from the fired ones - is that how pulling one card affects all the other cards still in the deck. Odds change in a hurry.

So how did David Shaw illustrate the fact that he's got a strong grasp on play-calling? By shuffling his plays ever so slightly to achieve the maximum results.

We're going to take a look at two touchdowns, called two weeks apart. First, let's examine a quick screen to Ty Montgomery that he took to the house against Cal.

Check out the play at full speed here:

Frame by frame, you can see that it's a relatively simple look, but it has complex options that can leave a defense baffled.

Kevin Hogan and company line up in the shotgun, with two backs in the backfield, two wideouts split to the right and another to the left. 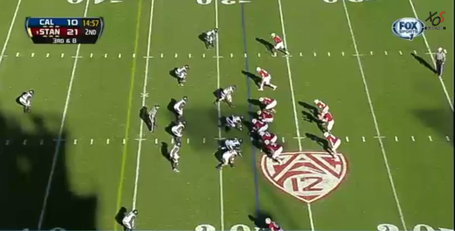 Here's the way the play looks in action. The right guard will pull and the running backs will carry out a power run look, following that guard around the end. Meanwhile, Devon Cajuste will block the corner covering Ty Montgomery, who will wait for a screen pass. 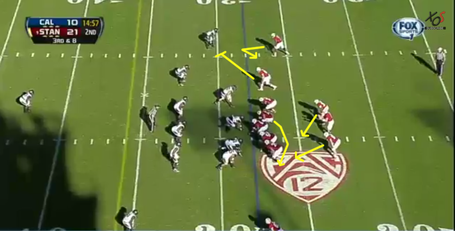 As the play gets underway, a third option reveals itself. 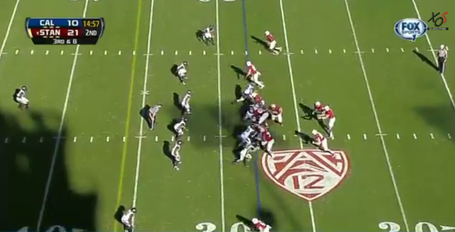 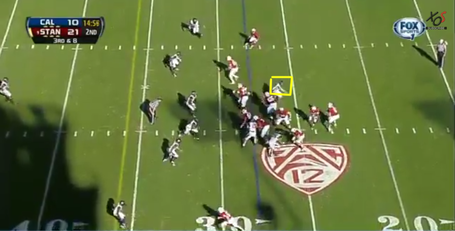 As the runners carry out the power run play action, Hogan pulls the ball and sees that the defensive end is looking right at him. If that end had crashed down inside toward the running back, Hogan could run with the ball himself in a zone read play - but instead he elects to throw to Ty Montgomery (which is never a bad choice). This kind of packaged option play is popular in the NFL now, with the Bills and Eagles running plays like this frequently. 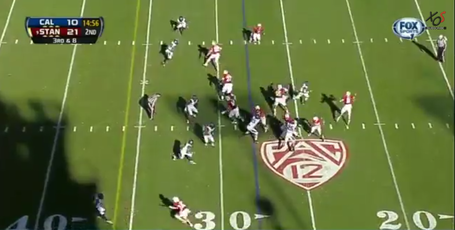 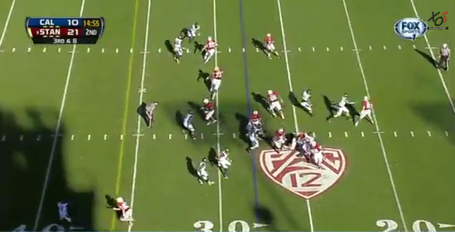 By the time the ball is in the air, Cajuste has carried out his block on the cornerback, while the offensive line has released downfield to get blockers on the second level. Ty takes those blocks and just outruns everyone to the end zone.

Altogether, it's great talent, a bad defense, and a play with options in action. The next week, Stanford's coaching staff used a small variation on a similar play to great success.

This was perhaps my favorite play call of the season because of its simplicity and effectiveness. It's a perfect example of good coaching in action.

Watch the play in action:

It's a slightly different look, called in an entirely different part of the field and the ball goes to a different player. But the screen against Cal the week before made this play possible.

Pre-snap, there are a couple of things to pay attention to.

This time, it's five wide with three split to Hogan's left. Notre Dame will have no deep safeties on this play, with seven guys lined up within a yard of the line of scrimmage. So even though Tyler Gaffney lines up wide, Hogan motions the running back closer to the formation in order to gain an extra blocker against the blitz that's obviously coming.

Here's the first few frames of the play: 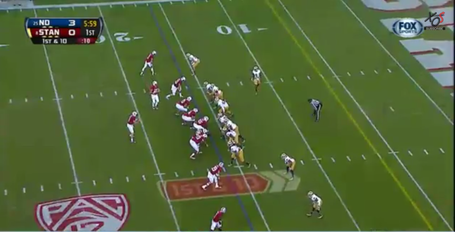 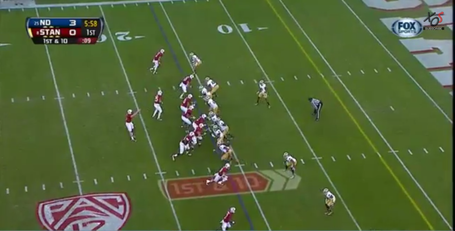 Now the play starts to take shape. Ty runs the same route as the play above, while Cajuste fires out to block the cornerback assigned to Montgomery. 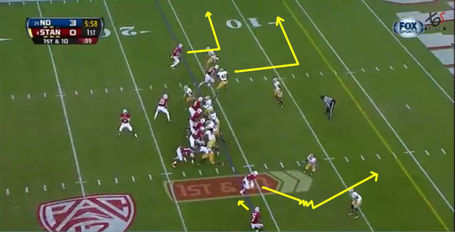 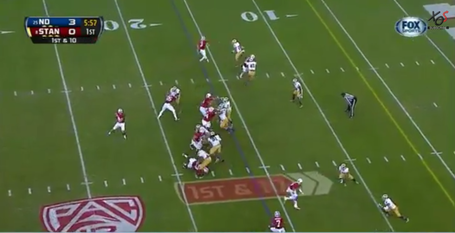 And here's where it gets interesting. Hogan pump fakes to Ty, which sends both Notre Dame cornerbacks flying his way. They're fully intent on blowing up this screen for no gain. 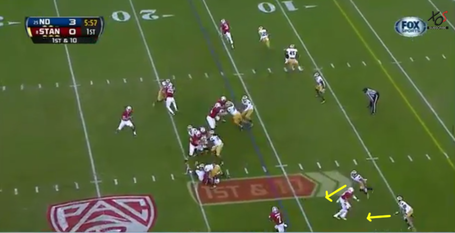 That is, until Cajuste slips right past both of them. 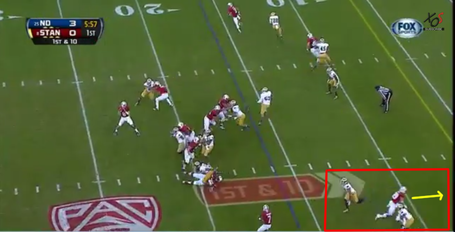 Both corners were so intent on not getting beaten by the play they had seen on tape from the week before that neither of them notices they've been given the slip until it's far too late. By the time Hogan winds up to throw deep, there's nobody even on the same half of the field as Cajuste. (That's his foot you see running out of the picture.) 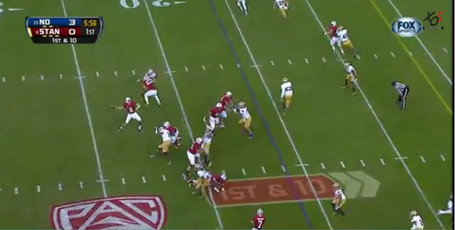 Now all Hogan has to do is not overthrow Cajuste. That's six easy points on the board for Stanford. 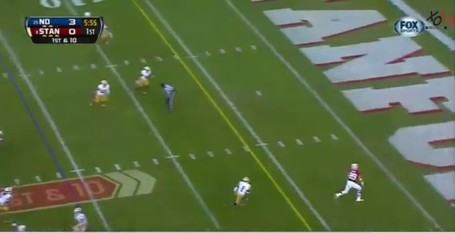 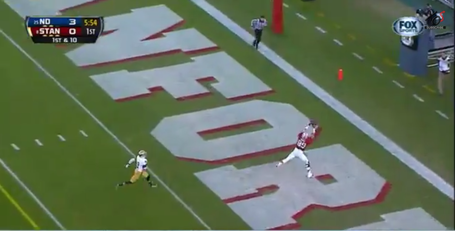 This play - a favorite of the Denver Broncos this season - shows that David Shaw understood the counters that Notre Dame was going to try and make to stop Montgomery after he exploded for five touchdowns against Cal. Then, all Shaw had to do was call a play that would bait the Irish defense into making a mistake.

The deck was stacked in his favor. And he played it exactly the way he needed to.