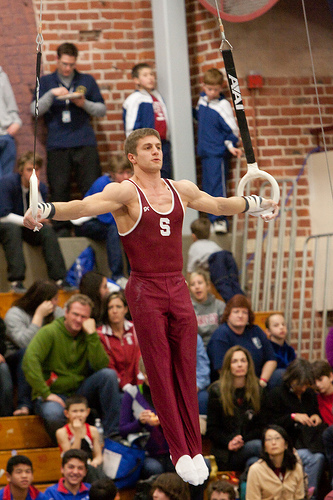 Nicholas Noone and the Stanford Men's Gymnastics team had a strong finish on the still rings to win their fifth national championship and Stanford's 100th overall. (via Tom Schmidt Photography)

While several varsity sports in Stanford Athletics are not recognized by the NCAA and have won championships (synchronized swimming is the first that comes to mind), only UCLA has won more NCAA championships with their 106 National Championships that they currently hold.  Some may remember that they broke the 100-championship mark in 2006 when they finished the closest second that any school has ever finished in the Director's Cup to Stanford.

The gymnasts were second to top-ranked Oklahoma through two events until Stanford came to the floor exercise where Stanford gymnasts propelled the men to the second best score this season in the NCAA with a 62.450.  The still rings were no match for the men, either, where Stanford gymnasts James Fosco and Tim Gentry led the Cardinal to a 60.700 combined event score, extending their lead over the Sooners despite having a few falls on the pommel horse the event before.  A combined 64.500 on the vault which saw three members of the Cardinal score at least a 16.000 kept Stanford on top as they won the team event finals by a comfortable 1.850 points over OU.  Seniors Ryan Lieberman and Josh Dixon finished high enough individually to qualify for the individual event finals tonight.  This championship marks Stanford's fifth men's gymnastics championship and second in three years.

Click here for the official scores from the NCAA and GoStanford's recap of the night.Congratulations to the men's gymnastics team and Stanford Athletics!