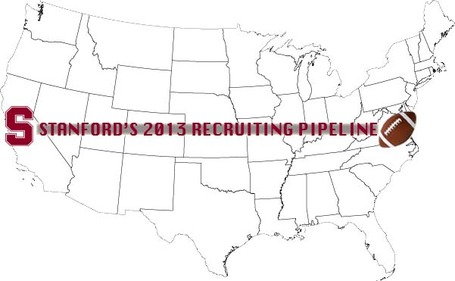 Stone Bridge (Ashburn, Va.) quarterback Ryan Burns committed to Stanford on Saturday during a recruiting visit to Palo Alto. The 6-foot-5, 220-pound Burns is ranked the No. 47 overall prospect in the Class of 2013 by Rivals. He is the Cardinal's second commitment for 2013, joining fellow Virginian Doug Randolph, a four-star linebacker from Richmond.

Ryan Burns missed all of his sophomore year with a shoulder injury, but led Stone Bridge to a 10-2 record as a junior. According to ESPN, he threw for 1,801 yards, 13 touchdowns, and 14 interceptions, and impressed coaches at the Elite 11 Regional camp.

Burns had offers from Boston College, Maryland, Penn State, Rutgers, West Virginia, Tennessee, and Virginia, where his brother former high school teammate, Rob Burns, is a defensive end for Mike London's Cavaliers. Rob was a three-star recruit who turned down an offer from Stanford, among other schools, to stay in state.

Here are a few highlights from Burns' junior season via the 247SportsStudio's YouTube channel: