Earlier today, I mentioned the new addition to Cagan Stadium that gives it an extra 400 seats as well as a press box.  Well, here's what it looks like: 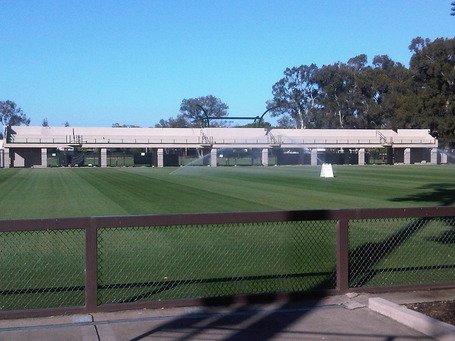 
This picture was taken just to the left of the big Oak tree at the entrance to Cagan Stadium, about five yards to the left of the entrance to the field itself.  The center of the structure is actually a box with a white canopy (not shown).  As you can see, seats are located on both sides of the box, but the seats don't descend to field level.  Instead, the area beneath the stands are empty and left open to field behind it and El Camino Real.  The effect is kind of cool in that it provides a somewhat neat symmetry to Stanford Stadium's open air concourse.  Unfortunately, at least for tonight, a green fence closed the view from the west side of the stadium, but the fence looked temporary.

While the concourse-like feel to the new structure is actually pretty cool, I don't expect it to be airy for long.  It bears a striking resemblance to the garage underneath the stands at Angell Field as well as the locker/equipment rooms under the west side stands.  In this instance, I wouldn't be surprised to see the open area be filled with more locker rooms, offices, and maybe a team room, similar to the team rooms at Taube, Steuben, Avery, and Sunken Diamond.  In the meantime, if Stanford ever brings down the green temporary fencing separating the field/El Camino Real and Cagan Stadium, I think it would be a great view for east side patrons, if only for a season or two.

After the jump, the other change I mentioned earlier this month.
If you follow any of the Stanford Athletics Administrators or individual departments on Twitter, you may have noticed a few of them talking about the conversion of Pac-10 Plaza to Pac-12 Plaza.  Around the first of this month, two new flagpoles were added to the north of the current posts (closest to Sam MacDonald mall).  The flags were rearranged to show the North division schools along the six northernmost posts while the six southernmost posts feature the Southern division schools, including Utah and Colorado. 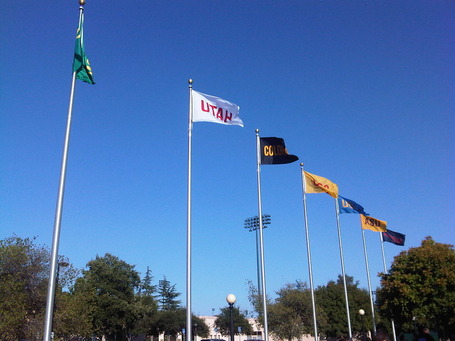 As before, all the flags are paired up, meaning the Arizona schools are together, as are Mountain schools, the SoCal and NorCal schools, the Oregon schools, and the Washington schools.  When you actually stand underneath them, it doesn't feel like much of an expansion at all.  You hardly notice the two new flagpoles.  The only complaint I have about the new flags is that Utah is painted white with red lettering, making it look a lot like the maroon and gray flag of WSU, but oh well.  In any case, kudos to Stanford Athletics for not forgetting something as small as the plaza flags when preparing for the new conference.