Share All sharing options for: Stanford-Oregon: Best and Worst

Here are the best and worst moments from Saturday's 53-30 loss to Oregon. (I'll understand if you'd rather not read this. We'll start looking ahead to Big Game tomorrow.)

Best Defenses: Both defenses forced three and outs to start the game, the game's first first down didn't come until midway through the first quarter, and Stanford limited the Ducks to -1 yards rushing over the first 15 minutes. For a short time, it seemed we were in for the second defensive struggle in as many Games of the Century.

Worst Sack: Stanford appeared to come up with the first big play of the game when Trent Murphy intercepted Darron Thomas's desperation heave while the Oregon quarterback was being driven to the ground by Matt Masifilo. But the officials ruled that Thomas's forward progress had been stopped and blew the whistle before he let go of the ball. Masifilo was credited with a 20-yard sack, but Oregon retained possession. Thomas was brilliant for the rest of the game.

Best Awareness: Jonathan Martin saved an interception on Stanford's third drive by batting down an Andrew Luck pass that was deflected straight up behind the the line of scrimmage.

Worst Throw: There would be no saving Luck from disaster later in the quarter when he made what Brent Musburger described as a horrendous throw. Dewitt Stuckey stepped in front of Coby Fleener to pick off the pass and returned it 30 yards before being taken down by Luck. The Ducks scored five plays later on a Thomas touchdown pass to Lavasier Tuinei.

Best Two-Point Conversion: The Ducks's two-point conversion after their first touchdown was a thing of beauty. Tight end David Paulson took the snap and threw a perfect strike to Mike Garrity, as Oregon improved to 3-of-4 on two-point conversions this year.

Best Workhorse: Stepfan Taylor had 20 of his 23 carries in the first half for 87 yards. Taylor finished with 99 yards and it didn't get another carry after the Cardinal's second drive of the second half. 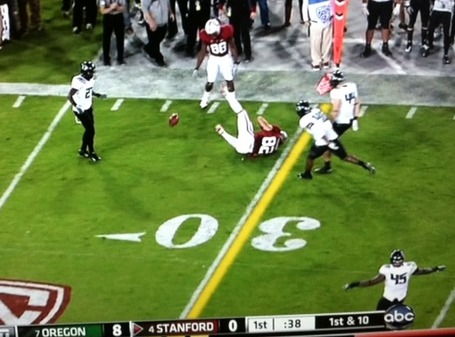 Worst Footing: Stanford was slipping and sliding all night on the wet turf, which may have contributed to some of the drops and Luck's uncharacteristic inaccuracy. Oregon slipped on occasion, too, but not nearly as often as the Cardinal. Toilolo couldn't stay upright.

Best Improvisation: Luck, who faced a lot of pressure and was sacked three times, made one terrific play with his feet by avoiding the rush, maneuvering out of the pocket and hitting Ryan Hewitt for a first down in the second quarter. One of the Ducks fans in my section said the play reminded him a lot of Aaron Rodgers. 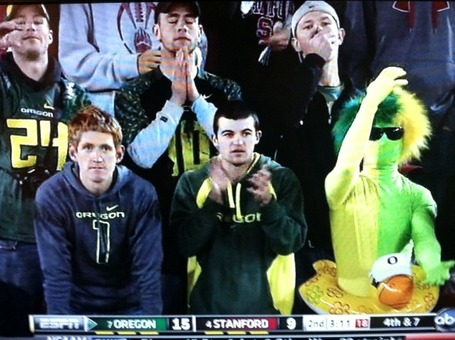 Best Decision on 4th Down: After freshman running back De'Anthony Thomas was stuffed for a two-yard loss on 3rd and 5 at the Stanford 39, Chip Kelly decided to go for it. As I learned from the Oregon fans in my section, the guy in the lower right is showing his appreciation for Kelly's intestinal fortitude by making the hand gesture for "Big Balls Chip." An Oregon fan in the back starts to pray, while another stifles a gasp. Michael Thomas came on the blitz, but he couldn't get to Darron Thomas in time. The Oregon quarterback floated the ball to De'Anthony Thomas in the right flat and he was gone for a 41-yard touchdown. "You get him to space, and it's goodnight Irene," Musburger said.

Best Answer: Trailing 22-9 with 2:47 to play in the first half,  Luck orchestrated a touchdown drive. Luck was 7-for-8 on the 8-play, 84-yard drive, which was capped by his second touchdown pass of the game to Whalen on a perfectly thrown slant. Whalen, who Musburger referred to as the Wes Welker of the Cardinal offense, finished with 9 catches for 107 yards.

Worst Tackling: On its first possession of the second half, Oregon went 74 yards in 4 plays and took a 29-16 lead on Josh Huff's 59-yard touchdown reception. Terrence Brown, who went horizontal to bring down De'Anthony Thomas on a great tackle in the first half, slipped and couldn't recover in time to make the tackle on Huff. Michael Thomas whiffed, too, as Stanford gave up yet another long TD.

Worst Decision on 4th Down: Oregon scored on its first possession of the second half to take a 29-16 lead. The Cardinal were poised to answer after a fumbled punt by James gave them excellent field position, but Fleener dropped a pass on 3rd and 6 that likely would've gone for the first down. Rather than go for it, David Shaw opted to have Whitaker attempt a 48-yard field goal. First, field goals don't beat the Ducks. Second, Whitaker had already missed an extra point and has been shaky in relief of the injured Jordan Williamson all year. The attempt  wasn't even close. 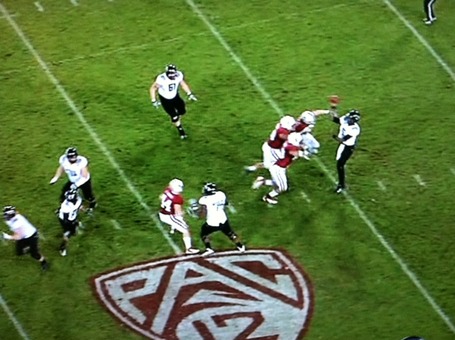 Best Playcalling: Most people would agree that Kelly out-coached Shaw on Saturday, which isn't all that surprising given that Kelly has a lot of experience in big games and Shaw is a rookie head coach. Oregon did a particularly good job of making Stanford pay when it blitzed. On several occasions, Cardinal defenders looked as if they would get to Thomas in the backfield, only to watch the Ducks QB drop a short screen pass off to one of his burners.

Worst Fumble: The Stanford defense forced a 3 and out after Whitaker's miss, but Luck fumbled deep in Cardinal territory on the first play of the ensuing drive. James darted into the end zone from 4 yards out four plays later to put the Ducks ahead 36-16. 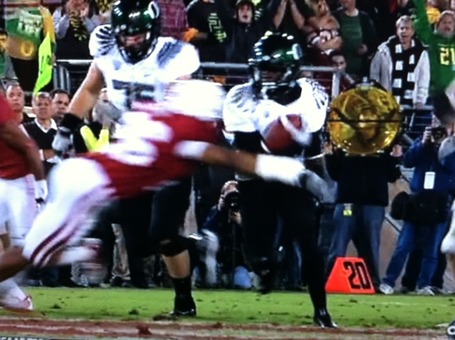 Best Return: Delano Howell, who wore a heavy cast on his right hand, returned to the lineup and forced a fumble in the second quarter. Howell finished with five tackles. 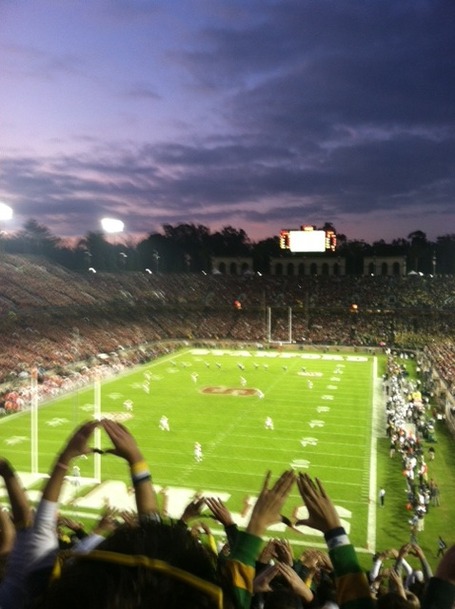 Worst 'Ohhhhhhh': The section I was in felt more like Autzen Stadium, which made things miserable when Stanford completely unraveled late in the fourth quarter. A couple of drunk Oregon girls in front of me made the 'O' sign, which usually looks more like a triangle, throughout the night. They couldn't understand why, when Oregon had the ball, the handful of Cardinal fans behind them, including myself, attempted to get loud by yelling "Ohhhhhhhh!" One of them turned to me and said, "Um, you realize that you're saying 'O', so you're basically cheering for Oregon, right? Oregon starts with O. That's what we say." Noted. 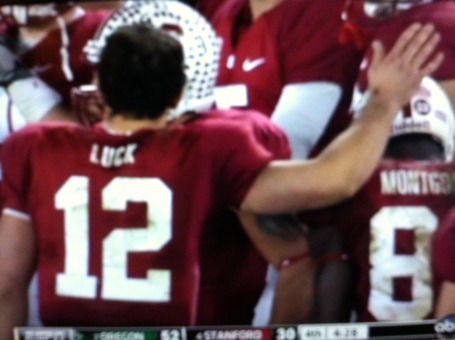 Best Leadership: Watching the painful replay of Saturday's loss was worth it for this moment late in the fourth quarter, which resonated with Kirk Herbstreit as well. After freshman Ty Montgomery had a pass bounce between his numbers and into the arms of Boseko Lokombo, who returned it for a 40-yard touchdown, Andrew Luck found the young receiver on the Stanford sideline, offered some words of encouragement, and patted him on the head. The play all but iced the game and Luck, who didn't get much help from his receivers not named Griff Whalen, had every reason to be ticked off. He appeared to shout an expletive to no one in particular as he came off the field, but composed himself before seeking out Montgomery. It was a small gesture, but it represented one of the many qualities we've come to love about Luck. It made me smile.