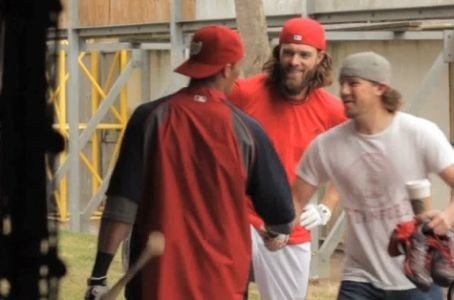 Today may be the first day of Stanford spring football practice, but spring training -- the MLB variety -- is already well underway. While the No. 1 Stanford baseball team has been steamrolling ranked opponents at Sunken Diamond en route to its first 7-0 start since the 1998 squad started 16-0-1, former Stanford players are scattered across Florida and Arizona, working out the kinks in time for the season, and, in some cases, trying to make an impression that keeps them on the big league roster.

Here's a look at what some Cardinal baseball alumni are up to:

Drew Storen, who emerged as one of the game's best closers last season, showed up at Nationals camp rocking a head of hair that would make Ben Gardner proud and a faded Stanford T-shirt (photo via). I'm just glad he didn't change his uniform number again this year. 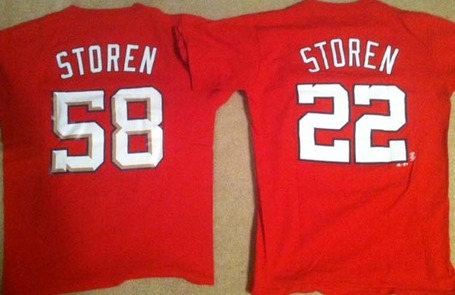 It was a busy week for Tampa Bay Rays outfielder Sam Fuld. On Monday, his excellent account of the crazy final day of the 2011 regular season appeared on Grantland. You should read it, if you haven't already, when you've made it through the rest of this post. Later in the week, baseball unveiled the "Sam Fuld Rule," which was inspired by the game last season when Rays manager Joe Maddon sent Fuld to the pitcher's mound to warm up in order to buy time for the pitcher Maddon actually wanted to call upon to finish getting ready in the bullpen. Rob Neyer explains.

Jeremy Guthrie is attending spring training in Arizona instead of Florida for the first time in his major league career after being traded from the Baltimore Orioles to the Colorado Rockies during the offseason. One of the biggest adjustments for the veteran right-hander? Re-learning how to bunt.

The Phillies have high expectations for John Mayberry Jr., who figures to be a regular in the Philadelphia lineup this season.

Carlos Quentin was traded to his hometown San Diego Padres during the offseason and has already been penciled in as the cleanup hitter in manager Bud Black's lineup. He should hitting in Peoria Stadium while it lasts; the power alleys at Petco Park are a far cry from the ones at U.S. Cellular Field.

Former No. 2 overall pick Greg Reynolds is happy to have a fresh start with the two-time defending American League champion Texas Rangers.

Michael Taylor will compete for playing time in a crowded Oakland A's outfield that will feature Cuban outfielder Yoenis Cespedes and Manny Ramirez during spring training.