The 49ers head coach proved he had an eye for finding talented coaches during his time at Stanford, and his former pupils are starting to flourish

Nobody has a better coaching tree than Bill Walsh.

The former Stanford and 49ers head coach boasts a legion of disciples that, at one time, were the head coaches of more than half the teams in the NFL.

But if things continue the way they're going, Walsh's impressive crowd of former assistants might be surpassed by the coaching tree of the latest guy to jump from Stanford to the 49ers.

That's right: Jim Harbaugh's coaching tree is barely a few years old, but legions of his former assistants are already starting to make their mark on the football landscape. In fact, one of them will be standing across the sideline from him at the Super Bowl. 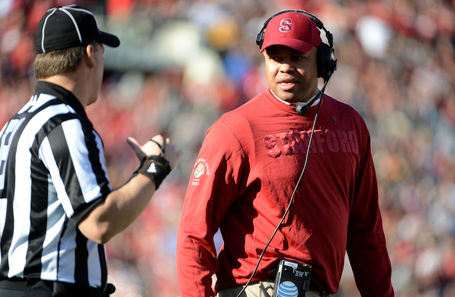 Shaw is setting the standard for Harbaugh's coaching tree.

There's no one blueprint for making it as a successful head coach. It helps to have a talented roster, a good support staff and a brilliant game plan - but maybe it's more important for a great coach to have a great group of assistant coaches.

A great coach has to have a staff of assistants that lives and breathes at his exact pace, marching in step to the insane, panic-driven, monomaniacal beat that drives successful coaches.

Harbaugh has already has proven that he's a great coach and a quarterback whisperer, but he's also proven that he has a remarkable eye for finding coaches with quick minds and bravado like his own - and football programs all across the country have jumped at the chance to get their own piece of Harbaugh's success.

Perhaps the place to start is with his first Stanford staff, hired in 2007. Harbaugh's first defensive coordinator, Scott Shafer, is now the head coach at Syracuse. Willie Taggart, who was the running backs coach who helped Toby Gerhart win the Doak Walker award has already had two head coaching jobs. He took over at Western Kentucky in 2010 before becoming the head coach at South Florida in December. And of course, David Shaw, the Cardinal's offensive coordinator, took over the Stanford program after Harbaugh left. You may have seen him on the sideline at the 2013 Rose Bowl.

Behind those three, there's a cadre of coaches that will be in line for the next group of head coaching openings. 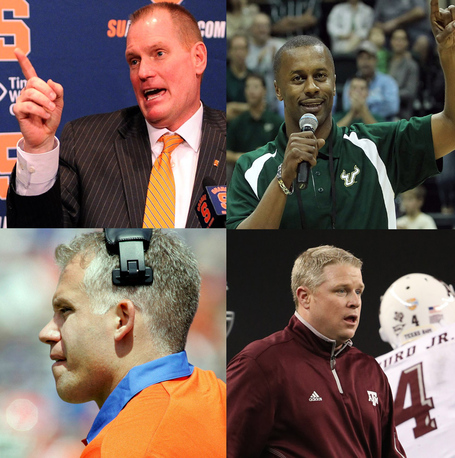 Andy Buh, who began as Stanford's linebackers coach in 2007, jumped to Nevada and then joined Wisconsin's staff, where he got a chance to take on his old squad - he was the Badgers' linebackers coach for the 2013 Rose Bowl. Buh is now the defensive coordinator at Cal.

D.J. Durkin, who was always viewed as a man on the rise when he was the special teams coach under Harbaugh, is now the defensive coordinator at Florida. When former Florida DC Dan Quinn left to coach the Seahawks' defense, Will Muschamp - one of the best defensive minds in college football - waited less than a day before promoting Durkin.

Harbaugh's eye for talent even extended to his lower-level hires. He hired an offensive assistant named Mike Sanford, who is now the Cardinal's running backs coach and could possibly become Stanford's next offensive coordinator.

Harbaugh also hired a former punter from Vanderbilt named Matt Weiss as a grad assistant - a notable hire because Weiss now works as a defensive assistant for the Baltimore Ravens, meaning his first two jobs in coaching were under Jim and John Harbaugh.

Tim Drevno, the man hired to coach Stanford's offensive line in 2007, helped found the now-famous "Tunnel Workers Union," and turned two three-star recruits into elite players: David DeCastro and Jonathan Martin. Now, he's coaching the best offensive line in the NFL with the 49ers. Greg Roman, Harbaugh's only hire to the Stanford staff in 2009, also followed his boss to the Niners, and his name was one of the finalists for the Jaguars head coaching job. 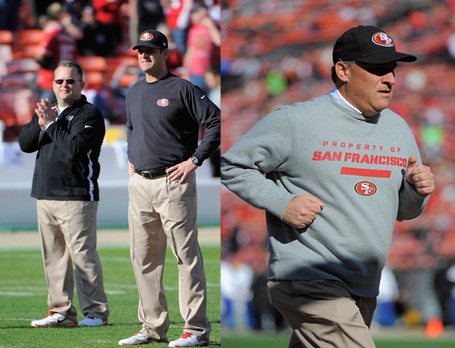 Greg Roman (left) and Vic Fangio (right) flourished at Stanford and now are preparing for a Super Bowl.

In 2010, after some of that initial group of assistants moved on from the Farm, Harbaugh was tasked with hiring a new crop of coaches.

Harbaugh's four hires might might be the most impressive group of his coaching tree: Vic Fangio, who was hired to be the Cardinal's DC, is now the 49ers defensive coordinator. Pep Hamilton, who was hired to be the wide receivers coach, created the best red zone offense in the country in 2011 and is now the Colts' new offensive coordinator. Derek Mason, the secondary coach, was promoted to DC in 2012 and was the primary architect of Stanford's overwhelming, Rose Bowl-winning defense. Finally, Brian Polian, the special teams coach, was named the new head coach at Nevada just a few weeks ago.

It's hard to pick just one of Harbaugh's former assistants as the most impressive so far. The Rose Bowl winning coaches? Perhaps the coordinators that took the 49ers to a Super Bowl? The coaches who are just getting their first shots at big-time BCS jobs?

Harbaugh's roots, planted at Stanford, are starting to grow and flourish. And while this week, the week before the Super Bowl, everybody is busy talking about family trees, don't be surprised if in a few years, everyone is spending this week talking about coaching trees.