Share All sharing options for: Stanford Captures College Cup with 1-0 Win Over Duke 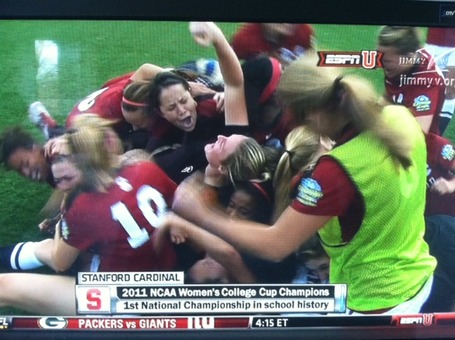 Making their third consecutive appearance in the College Cup final with nary a championship to show for it, a couple of seniors made sure that the Stanford women's soccer team would not be denied again. Teresa Noyola scored the only goal of the game off a beautiful cross from Camille Levin in the 53rd minute and the Cardinal held on for a 1-0 win over Duke in Kennesaw, Georgia.

The win capped an undefeated season for Stanford (25-0-1), which captured its first women's soccer national title. It was the perfect end to four impressive careers. In addition to Noyola and Levin, seniors Lindsay Taylor and Kristy Zurmuhlen were playing their final games for the Cardinal. Stanford was 95-3 during the foursome's time on the Farm.

The Blue Devils didn't register a shot on goal until midway through the second half. Emily Oliver deflected Kaitlyn Kerr's rocket from 30 yards out over the crossbar and the Cardinal survived a couple of other tense moments.

Some of the soccer-savvy fans who joined the Game Thread (thanks!) could tell you more about why Stanford won. Have at it in the comments, guys.