Share All sharing options for: Twelve Days of Pac-12: Arizona 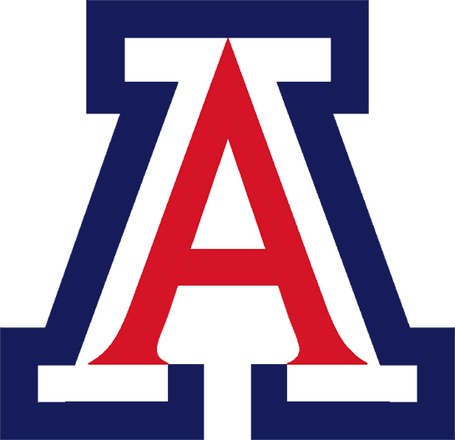 "You think anyone will notice if we take the Angels' logo, remove the halo, and give it a blue outline?" 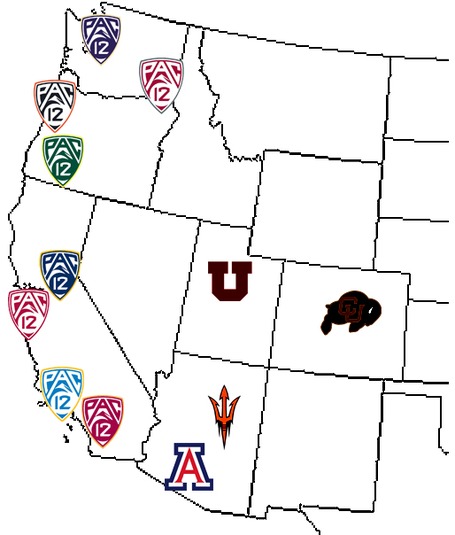 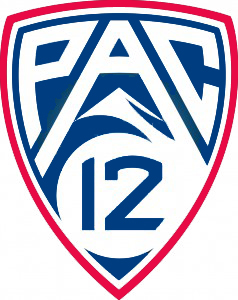 Did you know?  When you think of Arizona athletics, you typically think of softball and men's basketball (and on occasion, baseball and football).  These sports have combined to help put Arizona on the national map, especially after the Wildcats departure from the WAC to join the Pac-10 in the late-'70s.  But another sport, separate from the athletic department, also has made a name for itself.

Despite its extremely hot weather and mild winters, as well as the apparent lack of interest within the state to the Phoenix Coyotes, the University of Arizona has a hockey team.  The team is popular enough that Arizona administrators claim that over 100,000 people attend Arizona hockey games every year.  That statistic alone would make Arizona ice hockey the third-largest draw amongst college hockey programs in America.  While they do not compete in the NCAA, their ACHA membership allows Arizona to play collegiate hockey with several other FBS schools, including those within the traditional US hockey region of the Big Ten.

History with Stanford: Make no mistake about it, Arizona has been a thorn in Stanford's side in men's basketball for almost three decades.  While UCLA may have the history to back it's claim as the class of the conference, Arizona and Stanford have arguably fought more memorable games between each other.

Like football, basketball's rivalries are defined by recent history.  To that end, the Arizona-Stanford series has been a clunker since 2004.  It hasn't helped that neither school has been particularly successful on the hardwood since that 2004 game.  For a few years, Stanford remained an elite team in the Pac-10, or at least as elite as you could be in the Pac-10 given the competition, while Arizona went into a prolonged period of rebuilding, especially with the news of Lute Olsen's retirement and the search for a new head coach.  When Arizona finally got back to its winning ways and competing for conference championships, Stanford went into a freefall after Trent Johnson chose to leave Palo Alto for Baton Rouge, leaving new athletic director Bob Bowlsby to hire Duke assistant coach Johnny Dawkins.  While the success of that particular transition is still being watched, it can't take away from the history that the two schools have with each other.

If you were to ask Arizona fans who they consider their chief conference basketball rivals, they would say that today that would be UCLA.  This is due in part to both schools being the only two schools to have won a national championship in the Pac-10.  For that reason, Arizona fans tend to think of the Pac-10 as Arizona, UCLA, and then everyone else.  In other words, if you haven't won a championship, you aren't really a rival.  This may explain why they dislike UW so much today, given the Huskies tendency to turn spoiler on conference teams.  Well, that and no one seems to like Lorenzo Lomar outside of Seattle, but that's a whole other story.

For Stanford, though, it's history with Arizona is bittersweet.  From 1988's defeat of the #1 Wildcats (one of only three losses by Arizona that year) to the 1997 and 1998 Final Fours to the failure of either team to win on their home court for five years to the infamous 2004 game, these two schools have not liked each other in basketball for more than a while now.  Stanford fans, and for that matter four other Pac-10 teams, were supremely upset when Arizona finished sixth in the conference in 1997 with an 11-7 conference record (and a 3-7 road record!), yet managed to win the national championship.  Some of the bitterness wore off the following year when Stanford made it to the Final Four on the backs of Arthur Lee, Mark Madsen, and the Collins twins, while Arizona exited stage left against eventual Final Four team Utah.  Still, though, Stanford failed to win an overtime semifinal game against Kentucky and never made it back to the Final Four, while Arizona returned only three years later (where they lost in the national championship game).

By far, though, three games have helped define the Arizona-Stanford enmity, and all of them took place at Maples Pavilion.  In 1988, a talented Arizona team came to Stanford ranked as the top team in the nation.  The team featured eventual NBA talents such as Sean Elliott, Steve Kerr, and Kenny Lofton, while Stanford put on the court a team that many saw as Todd Lichti and... no one else.  Imagine the surprise when the 20-1 Wildcats were upset 82-74, a loss that dropped the Wildcats from tournament favorite to the media questioning their ability to reach the Final Four.  While Arizona did make it to the Final Four that season, the loss to Stanford stuck out to Wildcat fans for denying them the league crown under an undefeated conference record.

In 1989, Arizona came to Maples seeking revenge.  The Cats were picked to win the league, were ranked eighth in the nation, and had a 14-game Pac-10 winning streak.  Stanford, meanwhile, came into the game with an 8-3 record, no national ranking, and little confidence from people outside of Palo Alto.  Little mention was made to the fact that Stanford's three losses were to Indiana, North Carolina, and UCLA, or that Stanford had registered its first 20-win season (and first postseason appearance) in 46 years the year prior.  The game was almost completely out of reach for the Cardinal behind Elliott's career 30+ point night, and within six minutes, Stanford was down by 17 points.  Slowly, though, behind Lochti's career night as well, Stanford eventually came back and kept the game to within single digits at halftime and then taking the lead only a few minutes into the second half.  In a series of plays that almost played out in an exact manner 15 years later, Arizona clawed back from a nine point deficit at the five minute mark to only two points in the final minute.  After being fouled with four seconds to go, Arizona had the chance to tie the game -- but missed both free throws.  After an ensuing inbound pass by Stanford and subsequent foul, Stanford guard Bryan McSweeney made both shots, giving Stanford its second consecutive win against a ranked Arizona team and it's fifth straight win against the Wildcats at Maples.

The 2004 game at Maples was another affair completely.  Neither team had won on their home court for several years against the other, so the fact that Stanford had won in Tucson earlier in January meant little in the rivalry.  While Stanford possessed a No. 1 ranking and an unblemished record, Arizona, also a ranked team, came to Maples confident it could win.  Behind the play of Salim Stoudemire and a plethora of dangerous outside shooters, Arizona had the manpower to overtake Stanford.  The nationally televised ABC game featured a courtside Tiger Woods, an overflowing 6th Man section (the athletic department had so many students show up that they reduced single-game sales so that students who couldn't be on the floor could sit in half of the seats behind the north basket, an especially poignant gesture given that Maples Pavilion is the smallest arena in the Pac-10) and one of the largest crowds in Maples history.  The Arizona game was also peculiar in that it presented the final hurdle for an undefeated home season for the Cardinal, something that had never happened in Mike Montgomery's career at Stanford, assuming it could defeat the Oregon schools (who had not won in several decades at Stanford).

For the majority of the game, it seemed as though Stanford was on its way to continuing its unbeaten streak and finally defeating Arizona on its home court.  Perhaps the complacency was felt by the Cardinal, as Stanford relinquished its lead over Arizona with less than three minutes left in play after a Wildcat three-pointer stunned Maples for a 70-67 lead, Arizona's first of the game.  At that point, Stanford was struggling to just keep up shot-for-shot with Arizona.

But the game wasn't over yet, and behind a what seemed at the time miraculous shot by junior Josh Childress, Stanford tied Arizona with just over 20 seconds remaining.  In one of the craziest finishes in Stanford basketball history, Arizona took possession of the ball after a series of turnovers by both teams gave the ball to the Wildcats with just over seven seconds left in regulation.  Coach Olsen later would tell the media that his intent was to hold onto the ball until the waning second and get the last shot in.  Unfortunately for Arizona, Matt Lottich was waiting at mid-court, and with about 2.5 seconds remaining, the ball was knocked out of Stoudemire's possession and passed into the waiting hands of Nick Robinson.  With just over three tenths of a second remaining, Robinson threw up a mid-court prayer that went in just after the buzzer sounded, resulting in Stanford keeping it's No. 1 ranking and keeping intact it's undefeated season.

That game, if anything, is memorable for Brent Musburger's and Dick Vitale's announcing, especially in those frenetic final 40 seconds or so. 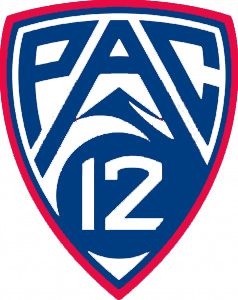