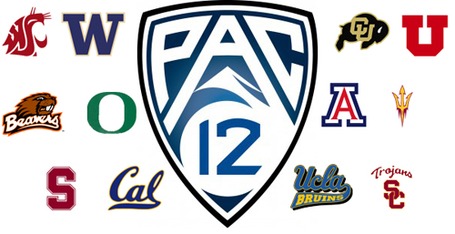 Larry Scott revealed today that the Pac-12 Network won't be one singular network, but rather seven networks to be run by Pac-12 Media Enterprises.  The seven channels will consist of a national network (to showcase the nationally televised games) with the remaining six networks to be regional networks based on the Pac-12's footprint (WA, OR, NorCal, SoCal, AZ, Mountain).  Deals are already reached with TWC, Comcast, Cox, and Brighthouse agreeing to air the regional networks on basic/digital cable packages.  Other providers are in negotiations with the league about distribution right now.

By having regional networks, the league effectively can broadcast over 850 non-football related events and ensure that a large portion of sports from all 12 schools are broadcast.  It remains to be seen, though, whether fans outside the geographic region will be able to see another regional network (e.g. Stanford fans in SoCal), whether it be terrestrial or mobile/internet viewing.  Also, it looks as though to watch the football and basketball games that were promised nationally will require the purchase of a separate sports package that will carry the national Pac-12 Network (update: only if you live outside the Pac-12 region -- see below).

Obviously, for Stanford fans at least (who have the least number of fans and alumni in their geographic footprint compared to the 11 other schools), if a deal can't be reached with regards to airing the regional networks elsewhere across the country, be it on the sports tier packages or as an online-subscription alternative, this setup is not-so desirable.  While fans on the east coast will be able to see the national Pac-12 network, if you also want to see sports other than Stanford football and men's basketball (i.e. women's basketball), pray that Larry Scott finds a solution within the next year.

UPDATE: Wilner over at the Merc adds a few more nuggets of information:

-- Comcast subscribers will get Pac-12 NorCal as part of the basic Digital Starter package (woo hoo!).  This may mean if you're a fan of either Cal or Stanford and live in NorCal and don't care about watching matches between teams outside your region, you may not even need to purchase the sports package for the national network.
-- The regional networks will carry football and men's basketball games.  That leads to the question of repetitiveness across all seven networks, though.
-- The conference, because it worked with several different cable partners, will retain full equity of the seven channels (in other words, everything goes back to the conference coffers).
-- Most importantly, all programming will be available on mobile devices that have been authenticated with either Pac-12 Media Enterprises or customers' cable networks.