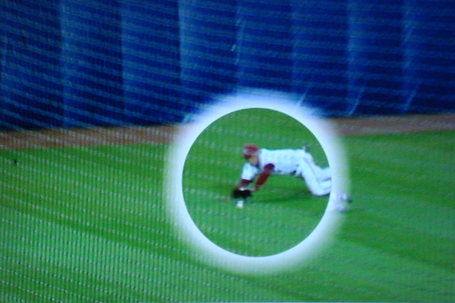 Stanford defeated Cal State Fullerton 1-0 in a classic pitcher's duel at Goodwin Field on Saturday night, leaving the Cardinal one win away from a spot in the Super Regionals.

Jordan Pries was masterful, allowing two hits and striking out five over 7.2 innings, while Chris Reed earned the four-out save. Stephen Piscotty provided the only run of the game with a solo home run in the bottom of the sixth. It was one of the only mistakes of the game by Fullerton starter Noe Ramirez, who allowed four hits and struck out 12.

As dominant as Pries and Ramirez were, the guy that people will be talking about is Tyler Gaffney. With two outs and Nick Ramirez on second based in the fifth inning of a scoreless game, Greg Velazquez laced a Pries offering into leftfield for an apparent RBI single. Gaffney, the two-sport standout who rushed for 255 yards and four touchdowns for Jim Harbaugh last season, made a diving attempt at the sinking line drive.

While it appeared that Gaffney trapped the ball, he immediately held up his glove with the ball wedged precariously near the heel. The third base umpire ruled it a clean catch for the third out of the inning. Fullerton coach Dave Serrano ran onto the field to protest the call. The explanation he received, which he relayed during an interview with the ESPNU broadcast team, was that the umpire never saw the ball hit the ground. Gaffney was shown joking with teammates in the dugout afterward. 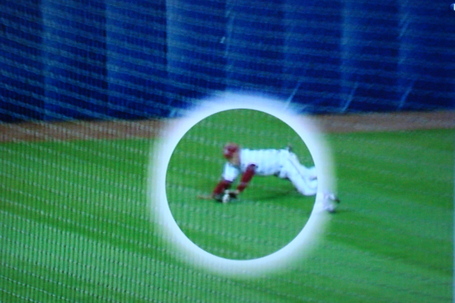 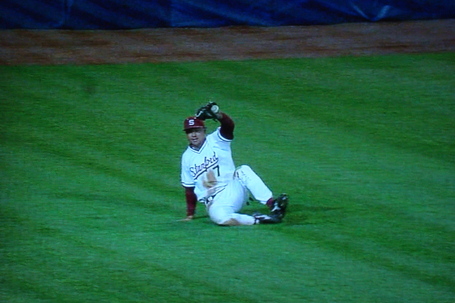 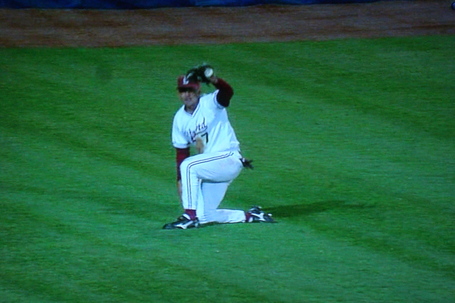 If we assume that Gaffney knew Velazquez's liner hit the ground, then holding up his glove was a clear attempt to deceive the umpire into thinking that he had made the catch. He had no chance to throw out Nick Ramirez, who was running on contact, so it was his only chance to save a run. It was a smart decision. Plays like this happen all the time in sports; they're just magnified in important games. (Soccer fans will remember German goalkeeper Manuel Neuer duping the linesman into thinking that Frank Lampard's shot hadn't crossed the goal line during last year's World Cup.)

Gaffney did what most of us would've done in that situation. Fullerton fans have the right to be bitter, but their beef should be with the third base umpire, not Gaffney. The same goes for the Fullerton players. Nick Ramirez and Gaffney exchanged words at first base after Gaffney singled late in the game. If Fullerton beats Illinois in tomorrow's early game, the rematch with Stanford tomorrow night should be mighty interesting.