Share All sharing options for: Stanford's Free Throw Shooting Through the Years 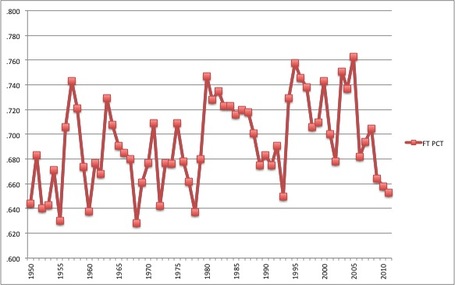 The Stanford men's basketball team's free throw shooting over the last three seasons leaves something to be desired, and that's putting it mildly. Barring an absurd 50-for-50 streak between now and the end of the season, the Cardinal will shoot less than 68% for a third consecutive year. Stanford hasn't, um, accomplished that since 1978.

Here's some good/interesting news for anyone who has found Stanford's free throw follies as maddening as I have. First, it could be worse. Two teams in the Pac-12 are shooting at a lower clip from the free throw line than Stanford, including USC, which is at a woeful 61%. The other team is first-place Washington, which shoots only 62% from the FT line, but averages more FT attempts per game than all but three teams in the league.

What does it all mean? I don't know. Just beat Cal (which happens to be the best free throw shooting team in the Pac-12).