Stanford Vs. USC: Best and Worst

Share All sharing options for: Stanford Vs. USC: Best and Worst

Here are the best and worst moments from Saturday's 21-14 win over USC.

Best Start: Ty Montgomery, who had a breakout game against the Trojans in 2011, returned the opening kickoff 64 yards to the USC 33.

Worst Opening Drive: Stanford failed to capitalize on the great field position. The Cardinal committed a delay of game penalty on first down and Josh Nunes sandwiched a pair of incompletions around an 8-yard pass to Stepfan Taylor. Jordan Williamson doinked his 47-yard field goal attempt off the left upright. In Williamson's defense, the snap was awful.

Best USC Receiver Not Named Woods or Lee: Freshman Nelson Agholor, who saved a touchdown by chasing down Montgomery on the opening kickoff, took a Matt Barkley pass 49 yards to the Stanford 1 to set up the first of two short touchdown runs by Silas Redd.

Worst Replacement Official Imitation: After the commercial break, former NFL Director of Officiating Mike Pereira appeared on the broadcast and cited Rule 9, Section 3, Article 2B of the college rule book, which states: "The runner shall not grasp a teammate; and no other player of his team shall grasp, push, lift or charge into him to assist him in forward progress." Redd, who was reppin' the 203 on his wrist tape (go crazy, Southwest Connecticut!), was clearly pulled into the end zone by USC offensive lineman Aundrey Walker. The Trojans should've been assessed a 5-yard penalty. Instead, they had a 7-0 lead. It should be noted that USC has been doing ish like this for years.

Best Return: Ryan Hewitt, who missed the first two games of the season with an ankle injury, returned on Saturday and made his presence felt. On the Cardinal's ensuing drive, Mr. Versatility picked up a first down with a tough run on third and short and then turned a Nunes pass in the flat into an 11-yard gain.

Worst Injury?: Anthony Wilkerson, who had two rushes for nine yards on the drive, was carted off the field with an apparent ankle injury.

Best Heisman (Runner-Up) Statement: On 2nd and 8 from the Stanford 41, Stepfan Taylor raced 59 yards to end end zone. Taylor finished with 153 yards on 27 carries, surpassing 3,000 rushing yards in his career, and was named the Walter Camp National Offensive Player of the Week. If Stanford continues to win and Taylor continues to shine, he could find himself in the Heisman Runner-Up discussion.

Worst Defense: Facing 4th and 19 from the Stanford 25 early in the second quarter the Trojans elected to go for it rather than have freshman Alex Wood (filling in for the injured Andre Heidari) attempt his first career kick. Barkley completed a short pass over the middle to Robert Woods, who managed to elude a couple of would-be tacklers and get to the outside before Terrence Brown pushed him out at the Stanford 1. Redd scored three plays later to give the Trojans a 14-7 lead.

Best Low-Percentage Throw: Nunes connected with Levine Toilolo for a 23-yard completion down to the USC 19 on one of those you're-6-foot-8-soI'm-just-gonna-lob-this-in-your-vicinity throws that he attempted so often against Duke.

Worst Playcall (That Would've Been the Best Playcall Had it Worked): On 1st and Goal from the 2, Nunes overthrew Kyle Murphy -- yes, freshman offensive linemen Kyle Murphy -- in the back of the end zone. In hindsight, Stanford probably should've taken their chances running the ball up the gut three times.

Worst Class: Curtis McNeal stepped on Barry Browning's face (and was flagged 15 yards for a personal foul) on USC's first drive of the second half. (via Gifulmination.com)

Worst Decision: Facing 4th and 5 at the USC 33, David Shaw elected to have Williamson try a long field goal rather than have his offense go for it. Williamson's kick was blocked. I thought this decision was more egregious than the failed pass to Murphy earlier in the game. Still, Shaw outcoached Lane Kiffin by a landslide.

Best Defensive Play: After the block, USC drove to the Stanford 13. On 4th and 2, Kiffin sent out his field goal team, but the tricky Trojans shifted into the shotgun. Barkley, who serves as the holder on field goals, took the snap and lofted a pass to fullback Soma Vainuku in the end zone. Stanford cornerback Ronnie Harris, who didn't see any action as a freshman last season, knocked the ball away at the last instant.

Worst Absence: USC really missed center Khaled Holmes, who was sidelined with an ankle injury, particularly in the second half.

Best Screen Pass: Nunes and Taylor hooked up for a 23-yard touchdown pass that tied the score with 10 seconds to play in the third quarter.

Best Run, Non Stepfan Taylor Edition: On 3rd and 10 from the 50, Nunes reached into his bag of tricks and pulled out this improbable 12-yard run. Look at those moves!

Worst and Best Passes to Zach Ertz: Nunes, who only completed 15-of-32 passes in the game, bounced a pass to a wide-open Ertz on the Cardinal's first drive of the fourth quarter, but threw a perfect strike to the tight end a few plays later for a 37-yard touchdown that gave Stanford the lead. 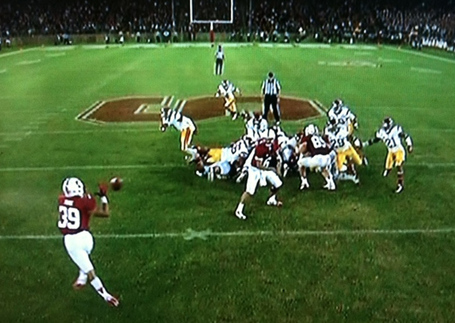 Best Playcall: With Stanford leading 21-14 midway through the fourth quarter, the Cardinal faced a 3rd and 1 at its own 39. Redshirt freshman Kelsey Young came into the game and lined up behind Hewitt. Everyone expected Hewitt to get the ball, but Nunes faked the handoff to his fullback and flipped the ball back to Young, who picked up 11 yards. The play, which Stanford ran against Arizona last year with Wilkerson in the place of Young, allowed the Cardinal to burn nearly 3 more minutes off the clock. It was a brilliant call by Shaw and perfectly executed.

Worst Feeling: After Marqise Lee made an incredible catch on 4th and 5 to keep the Trojans' final drive alive, I had visions of Barkley leading the Trojans down the field and forcing another overtime thriller.

Best Sacks: Silly me, Barkley was too busy eating turf to lead a game-tying drive. All four of the Cardinal's sacks came in the second half, including two that set up Barkley's harmless desperation heave on 4th and 39 on the final play of the game. As well as the front seven played, you can't say enough about the Cardinal's secondary. Brown, Barry Browning, Jordan Richards, Wayne Lyons, Ed Reynolds -- everyone was on point.

Best Winning Streak: That's four straight over the Trojans for the first time in school history.