Cardinal in the NFL: More Stanford rookies on track to make impact in the league

Final cuts have been made in the NFL, so let’s see how Stanford’s rookie class fared

Share All sharing options for: Cardinal in the NFL: More Stanford rookies on track to make impact in the league

Leading up to the NFL Draft, there were concerns around Skov's speed due to tearing his ACL, MCL and breaking the tibia in his left leg early in the 2011 season. As a result, the 2013 first team All Pac-12 linebacker went undrafted, but was quickly scooped up by the 49ers to provide needed competition for Navarro Bowman's vacant LB spot. Skov strived to make the roster as a special teams contributor, but was never able to overcome his lack of next level speed. Skov was cut on August 31st and signed to the 49ers practice squad. Skov appeared in all four 49ers preseason games and recorded 10 tackles and 1 QB hit.

Gaffney's career with the Carolina Panthers was a short one. Gaffney was drafted in the 6th round in May's draft, but only lasted one preseason play with the Panthers before tearing his lateral meniscus in his left knee. The Panthers waived Gaffney in hopes he would clear waivers and then place him on IR, but the New England Patriots swooped in and claimed him, then placed him on injured reserve. Gaffney is scheduled to undergo season ending surgery, but the hopes are that he will compete for a roster spot next year for the Pats.

The Washington Redskins' first pick of May's Draft didn't come until the 2nd round, but with the 47th overall pick the Redskins selected Trent Murphy. The Redskins drafted Murphy in hopes that he would be an integral part of a unit that is looking to rebound from a disappointing 2013 season - and possibly take over for Brian Orakpo next season. Murphy has impressed defensive coordinator Jim Haslett and the Redskins' staff with his ability to quickly learn the team's defensive schemes. Murphy's hard work paid off in the Redskins' 3rd preseason game when he was able to record his first NFL sack against Baltimore's Tyrod Taylor.

"We had great pressure up the middle," Murphy said. "I bull-rushed the right tackle back into his pocket. (Taylor) tried to escape outside and then I grabbed my hand on him, wrapped him, and took him down."

Gardner was drafted in 7th round by the Dallas Cowboys, but tore ligaments in his left shoulder during his first padded practice of training camp. Gardner has been placed on the Cowboys' IR, but is confident for a strong return.

"I really felt I could come in and help this team right away," Gardner said. "It hurts. But like I said before, I have 100 percent confidence I can come back in the future and I am still a very young player. I think I still have a bright future."

Hewitt went undrafted in May's draft, but Marvin Lewis and the Cincinnati Bengals saw something in the former Cardinal fullback. Hewitt's versatility impressed coaches all camp and as a result parted ways with former fullback/H-back Orson Charles to make a spot for Hewitt on the 53-man roster. Marvin Lewis outwardly praised Hewitt all camp and might have tipped his hand early on who his starting fullback/H-back would be. "It's just not been too big for him," Lewis said of Hewitt's time playing the position so far. "As he grows and [if] he's fortunate enough to stay around here, I think by next year we'll have real, real, real big, physical man. He's going to be a big person."

The Bengals and Lewis look to make the Fullback/H-Back position more prominent in this year's offense due to the confidence they have in Hewitt. Hewitt appeared in all four Bengals preseason games recording a total of 4 receptions and a TD in their game against Indianapolis.

The former Cardinal guard was picked up in the 5th round by the Minnesota Vikings in hopes he would be a quality backup behind Vikings guard Charlie Johnson. Yankey had an up and down preseason and new offensive coordinator Norv Turner shared his thoughts after Yankey's performance in a preseason game against the Raiders. "I thought that he really had a stretch at the beginning where he played pretty well," Turner said. "I thought that he got a little tired and in the end of the game, in the last part, he was not as physical as he was early." It was announced last week that Yankey made the Vikings' 53 man roster.

Reynolds was drafted in the 5th round by the Philadelphia Eagles, but fell behind early for missing OTAs because of Stanford's late graduation date. Reynolds didn't make the 53 man roster, instead making it onto the practice squad, but he vows to continue to get better. The next step is just to continue to go out there every day and get better, hone my craft, because at any moment I can either get moved up on the 53 here [or] I can go somewhere else. It just depends on what the situation is. So for me, [the goal is] just to become a better player every day."

Fleming was drafted by the Patriots with the 140th pick in the fourth round of May's Draft. According to multiple reports, Fleming performed at a high level throughout training camp. Fleming will be looked upon as the main backup to the right tackle position behind incumbent Marcus Cannon. Fleming also seems to be getting along with a particular teammate. 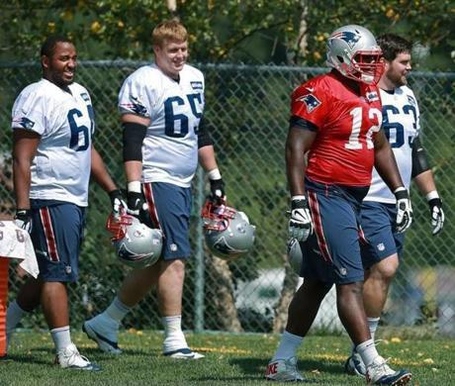 The undrafted linebacker had a very real chance of making the Steelers' 53 man roster going into the final week of preseason play. Mauro impressed all throughout camp with his work ethic and technique and it showed on the field as he recorded 9 tackles and 3 sacks. Mauro played liked a drafted rookie and even survived the final cuts. Mauro was signed to the Steelers' practice squad, but with further development has a chance to see the field with the yellow and black.