Rock the Vote for Andrew Luck and Griff Whalen

Share All sharing options for: Rock the Vote for Andrew Luck and Griff Whalen 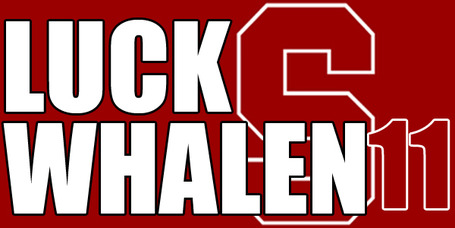 If Andrew Luck wins the Heisman Trophy, roommate Griff Whalen could be a reason why. Whalen caught a team-high 49 of Luck's 261 completions for four touchdowns, but that's only part of it. Griff Whalen isn't Justin Blackmon or Robert Woods, which is to say he isn't a future first-round draft pick. Heck, he's not even related to Ryan Whalen, one of Luck's main targets a year ago. That Luck has matched the numbers he put up last season without a pair of receivers who are now in the NFL is impressive. (Of course, having three tight ends who could wind up playing on Sunday helps.)

In any event, Luck and Whalen are finalists for a couple of awards and could use your help. Luck is third in the fan voting for the Davey O'Brien Award, given to the nation's best quarterback, behind Robert Griffin III and Case Keenum. Voting ends December 4. VOTE LUCK

Whalen is one of three finalists for the Burlsworth Trophy, which is awarded to the nation's best player who began his career as a walk-on. The award was established in 2010 and honors former Arkansas walk-on Brandon Burlsworth, who was killed in a car accident 11 days after being drafted by the Indianapolis Colts in the 1999 NFL Draft.

Whalen has a lot of ground to make up in the race. Southern Miss quarterback Austin Davis and Houston receiver Patrick Edwards, who will square off in the C-USA Championship Game, have 45% and 42% of the votes, respectively. You can vote once per day until December 7. VOTE WHALEN

Is there someone else to add to the ticket? Tell me in the comments.