Open practices and why they’re good for Stanford

Share All sharing options for: Open practices and why they’re good for Stanford 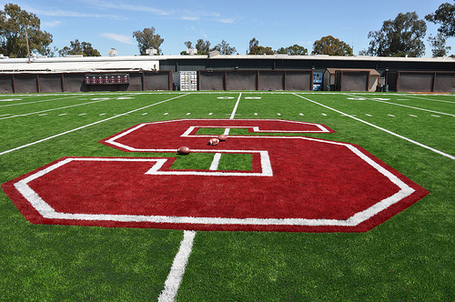 Last Sunday, I had the (chance) opportunity to see the Stanford football team practice for the first time since 2006.  It was one of those practices that happened only because the open practice that was scheduled the day before happened to coincide with temperatures never venturing north of 43 degrees, so I lucked out on seeing the team.  If you’re wondering how the practices have gone, check out Dave Fowkes’ reports in the Examiner the past week to see how Luck’s progressing, who he’s throwing to now that his preferred receivers from last year are gone, who’s filling the holes in both lines, and how Coach Shaw looks out on the practice field.

While all of those things are important, one thing that hasn’t been widely publicized is attendance.  Yes, this is another attendance story.  But it’s a positive one, I promise.  See, back in the dark ages pre-Harbaugh, practices were open.  Anyone who wanted to see a practice could park themselves on one of the concrete benches alongside Maples and just watch the drills and practice plays of Trent Edwards, TJ Rushing, and Walt Harris.  I remember sometimes there would be one or two people who would drop by, usually with a picnic dinner, and just sit and watch.  Granted, the quality of the product being shown to anyone who watched was, well, less than stellar, if people knew what to look for, they could see the signs of future life in freshmen in the fall of 2006 such as Toby Gerhart, Richard Sherman, Austin Yancy, Andrew Phillips, and Sione Fua.  All of those freshmen provided limited minutes in actual games (Gerhart only started one game), but the open practice allowed what remaining fans there were of Stanford to see that perhaps not all was lost to the black hole that was Stanford Football at the time.

Fast forward two years later, and now-savior Jim Harbaugh had cut-off all public access to the team during practice, both to fans and media alike.  Instead, Coach Harbaugh had installed around half of the practice field a 7’ fence to surround one of the football fields and shield all prying eyes from Stanford practices.  With that, gone were the picnics, the passerbys getting off of work and making a detour to check out a practice, and what little fan connection to the team that remained.  Say what you will about Coach Harbaugh, but in retrospect, he was not a fan-friendly coach when it came to football matters.  Approach him about anything but football and he is the nicest guy you’d ever meet, and he’d be glad to talk to you about whatever.  It wasn’t as though he didn’t make himself a hermit while a coach, either, attending Sunday services for the Catholic Community at Stanford on a regular basis with his wife.  But the minute you attempted to engage him in football-related manners, you met awkward Harbaugh – eccentric, guarded, and at times combative.  For the purposes of keeping opponents in the dark and confused on the football field, this type of personality worked great.  For the purposes of engaging fans and potential fans, it was a bomb.

Closing practices only helped solidify the media’s perception of Stanford, and Harbaugh’s team, being an exclusive, country club-esque environment for which if you weren’t a part of the community already, you didn’t need to be a part of it going forward either.  For some justification on this, just look at media mentions of Stanford vs. Cal and even SJSU.  Pre-2008, finding Stanford related media, while focusing mostly on the negative (1-11, Harris’ totalitarian coaching style, Buddyball), wasn’t too difficult.  The Chronicle, Mercury News, and at times even the Oakland Tribune would regularly write about Stanford football, with the Page 1 Headliner news going to Cal’s excellent teams.  CBS5, KRON, KGO, and NBC11 all also devoted at least one story to Stanford that would show highlights or a sideline reporter.  After the 2007 season, when the closed practices began, news about Stanford football slowed to a trickle.  Interest in Stanford football had stagnated, and most certainly didn’t grow.  Gone were the daily or semi-daily reports in the newspapers, opting instead for the open practices with media-friendly rules of Cal and SJSU.  Stanford football, even in its wins, was delegated to a single slide showing the score on KGO’s "After the Game," and that’s even after games where Stanford won and Cal lost on the same Saturday.  Most egregiously, sports anchor Dennis O'Donnell of CBS5 openly called for Andrew Luck and Jim Harbaugh to just give up on Stanford join the 49ers in January– after Stanford beat USC this past fall.  All respect for the program was lost by the media, and it certainly trickled down to the people of the Bay Area.

This gets back to the issue of open practices.  A most curious thing happened at last year’s Spring Game at Kezar Stadium in SF – there actually was a very large crowd at Kezar.  SF Parks and Rec (I assume) closed off one side of the stadium, but the other side with the fans was filled to the brim and bustling with activity.  More than a few fans decided to avoid the crowds of the benches and sit on the grass surrounding the field to watch the game.  It was a vastly different experience from the Spring Game of 2009 at Stanford Stadium that barely filled two sections of fans.  Not only did fans see an exciting game (who knew that a game devoid of any offense in regulation with one squad led by Andrew Luck would be exciting), but it also showed a glimmer of hope for the future.  Maybe some of it had to do with marketing, and maybe some of it had to do with the fact that Stanford was coming off of its first bowl-season in eight years.  Clearly, though, there were some fans that were interested in the team and watching a practice.

Fast forward to this past Sunday and the open practice the team held.  In something I have never seen in almost ten years here in the Bay Area, people showed up to watch the football team practice.  And it wasn’t just one or two people.  This was a crowd of easily 100 people varying in age from toddler to septuagenarians and older.  And they watched as Stanford players ran around the field, threw a few passes, and gave a few hits.  No organized game or scrimmage to watch, just a typical practice.  Don’t let anyone tell you otherwise, but the open practice was a success.  If anything, the mere fact that fans took time from their Oscar-planning parties in the Bay Area to watch young men throw a ball around in a practice is a clear step up from the past.  This kind of thing helps connect football to the community in ways that hospital visits, book readings, and booth appearances at summer festivals just can’t do – they give people the opportunity to see what it is that Stanford wants them to see, which is a quality football team at a quality school without fully investing in a ticket blindly, as season ticket holders the past three years have mostly done.

Are there still closed practices?  Sure, but let’s be practical here.  Closing off some practices is a whole lot better than closing off all practices.  Giving the media the opportunity to see Stanford football, even in its down years, is better than never letting them see them at all except for three hours on 12 Saturdays out of the year.  Giving what few college football fans there are on the Peninsula the opportunity to see a BCS-caliber team in action outside of those Saturdays helps promote the game, and the team, in ways that those clever marketing methods can’t do.  For the future, let’s hope that Coach Shaw continues to allow some practices be shown out in the open.  If personnel are worried about opposing teams seeing them practice plays, well, teams were already gunning for Stanford anyway (the general public tends to take Belichek-esque spying pretty negatively anyway).  Bigger and better programs hold open practices.  Stanford should think about doing it too.

The first session of Spring Practice ends this Saturday with an open practice Saturday at 2PM at the Football Practice Field behind Maples Pavilion.  Spring Practice formally ends with the Spring Cardinal and White Game at Kezar Stadium in San Francisco April 9th at 2PM.